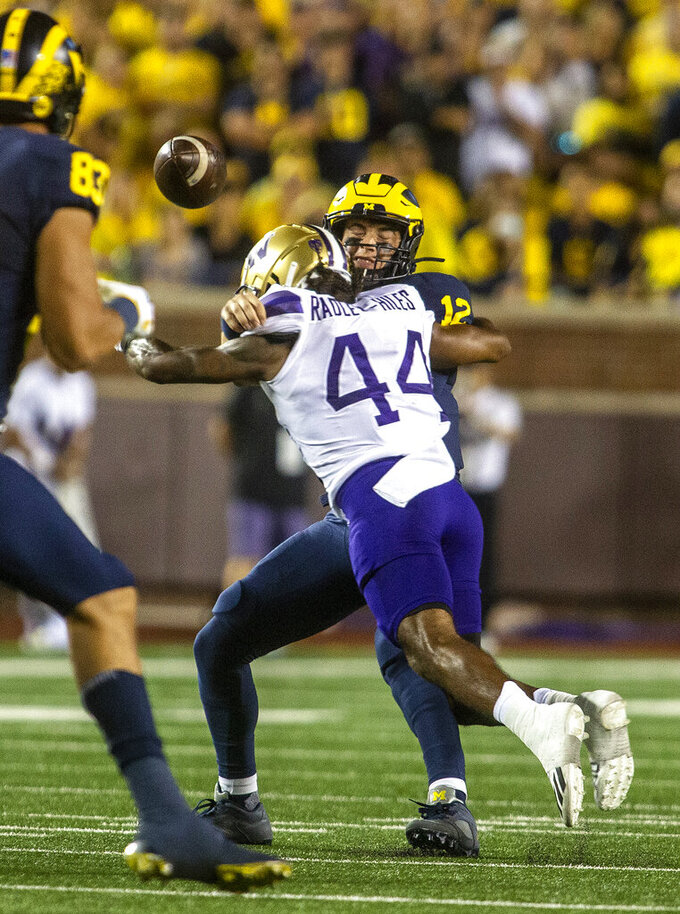 SEATTLE (AP) — What appeared to be an easy final tune-up before Washington jumps into conference play has quickly become a tipping point for the Huskies' entire season.

Butch Jones and Arkansas State have a chance Saturday to send Washington’s season into a much deeper spiral.

“We know they’re going to try to create some momentum and some energy. ... This is a Pac-12 team that some people predicted of winning their conference,” said Jones, Arkansas State's first-year coach. “They’re very skilled, they’re very talented, they’re very big. So it’s gonna be a great challenge for us.”

Jones is correct that Washington (0-2) was considered a contender for the Pac-12 title, and while that’s still possible, the Huskies haven't produced any evidence over the first two weeks that it will happen.

Washington’s stunning 13-7 season-opening loss to FCS power Montana sounded plenty of alarms around Montlake — and only once was it the siren played in the stadium after a touchdown. The alarms only grew louder after last week’s trip to Michigan ended with a 31-10 thumping and more grumbling about the first 0-2 start for the Huskies since 2008.

Most troubling is Washington’s offense, which has shown no spark and very little creativity. It’s led to rumbles of a potential change at offensive coordinator if John Donovan can’t find ways to help get the Huskies into the end zone against Arkansas State.

For now, coach Jimmy Lake is shouldering the blame. He freely acknowledges immediate improvement is needed.

“This comes back on me now,” Lake said. “We’ve only scored 17 points in two games. So I would say it’s not very good right now, and that starts with me. So we’ve got to give our guys a better play. We’ve got to be able to move the ball quicker and start faster and give our guys confidence.”

The Red Wolves (1-1) seem willing to let the game become a shootout if Washington cooperates. Arkansas State opened with a 40-21 win over Central Arkansas before a wild 55-50 loss to Memphis last week. The Red Wolves trailed 55-36 before scoring a pair of late touchdowns and had a desperation throw on the final play of the game fall to the turf in the end zone.

Jones was encouraged by the competitiveness but dismayed by the mistakes made by the Red Wolves.

“The focus, the attention to detail, that’s the biggest thing with this team,” Jones said. “The fundamentals, all those things that go into playing winning football that’s critical as we continue to move forward.”

Based off the first two games, good luck figuring out who Arkansas State’s primary quarterback will be against the Huskies.

Blackman started the opener, only to get replaced by Hatcher, who was 12 for 12 passing for 150 yards and four touchdowns against Central Arkansas.

That led to Hatcher starting against Memphis. But when he struggled, Blackman took over and engineered the Red Wolves’ comeback. Blackman was 19 of 28 for 306 yards and four TDs against Memphis.

If there is ever a week for Washington’s offense to get sparked, this would seem an optimal opponent. Arkansas State allowed 680 total yards last week to Memphis. Specifically, the Tigers had 263 yards rushing and ran for three scores.

Washington’s running game was supposed to be a strength but so far has accomplished very little. The Huskies are averaging 1.9 yards per rush and top running backs Richard Newton and Cam Davis have a combined 116 yards on 42 carries through two games.

Arkansas State will play at a Pac-12 team for the third time in program history. The Red Wolves lost at Oregon in 2012 and at USC in 2015, both teams ranked in the top 10 at the time. Since moving to the FBS level in 1992, the Red Wolves have won twice at Power Five opponents — 2008 at Texas A&M and last year at Kansas State.