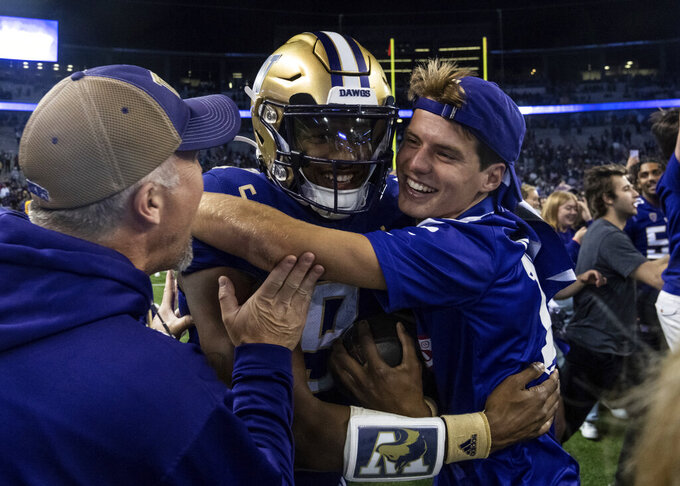 SEATTLE (AP) — Kalen DeBoer knew no matter how well the transition had gone, this was the week that would validate — one way or another — what Washington had showed so far.

Behind a spectacular performance by Michael Penix Jr., the Huskies emphatically stated their case as a contender in the Pac-12 and maybe worth some national recognition.

“We just beat a really good football team in my mind,” Huskies coach DeBoer said. “To get this win now is just going to continue to put the belief in our guys.”

Penix was terrific for three quarters in a primetime national showcase that showed DeBoer’s rebuild is progressing faster than expected. Washington led 29-8 at halftime and 36-14 after three quarters.

Having a star quarterback certainly helps.

Penix completed 24 of 40 passes and just missed posting the eighth 400-yard passing game in Washington history. He was at his best in the first half, connecting on 18 of 24 attempts for 278 yards and leading Washington to touchdowns on four of its five possessions.

He wasn't sacked by a Michigan State pass rush that led the country in sacks after two weeks.

“I felt real comfortable out there knowing that I got five guys up there that’s gonna protect me each and every play,” Penix said.

It was the second-best day in Penix’s career in terms of yards passing and TDs, trailing only his 491 yards and five TDs in 2020 against Ohio State while playing for Indiana.

“You got a guy who you can win football games with, not just like try to manage a game, and he’s got so much belief by his teammates in him,” DeBoer said.

Ja’Lynn Polk had six catches for a career-high 153 yards and three TDs. Polk’s 53-yard touchdown catch early in the third quarter was a resounding answer after Michigan State scored on the opening drive of the second half to pull within 29-14.

Payton Thorne threw for 323 yards and three TDs, and led a pair of quick fourth-quarter scoring drives for Michigan State that caused some nerves for the Huskies. Thorne threw a 33-yard TD to Keon Coleman with 5:17 left and the 2-point conversion pulled Michigan State within 11. But the rally was too late for the Spartans (2-1), who were stymied in the run game and saw their pass defense get exposed.

“We had a matchup issue that they took advantage of. It was obvious, it showed up early in the game,” Michigan State coach Mel Tucker said. “We knew that it was going to be a game of explosives. ... We knew that we needed to eliminate explosive gains and we weren’t able to do that.”

It was Washington’s first win over a ranked Power Five nonconference opponent at home since beating Michigan to open the 2001 season. And the night ended with a sea of purple fans celebrating on the turf of Husky Stadium.

Penix and the Huskies were hot from the outset. Penix threw touchdowns of 8 yards to Polk on Washington’s opening possession and a 19-yard strike to Tualapapa on facing third-and-6 in the second quarter. Penix capped his stellar first half by leading Washington on a 65-yard TD drive in the closing seconds of the half and scrambling from pressure to hit Polk on a 17-yard TD with four seconds left in the half.

Polk had a career-high 100 yards receiving by the half and the Huskies rolled up 322 yards to just 90 for the Spartans in the first 30 minutes.

Michigan State: The Spartans had the worst pass defense in the country a season ago. And while there was hope through the first two games it had improved, the Spartans secondary was completely exposed by Washington. The Spartans surrendered nearly 400 yards passing in just three quarters. Washington’s first punt came in the final minute of the third quarter.

Washington: The Huskies run defense deserves a ton of recognition: Michigan State finished with 42 yards rushing. The better judge of how Washington did was holding the combo of Jerek Broussard and Jalen Berger to 30 yards on 17 carries. Michigan State averaged 228.5 yards rushing over the first two games.