Cavs try to take 'next step' in Orange Bowl against Gators 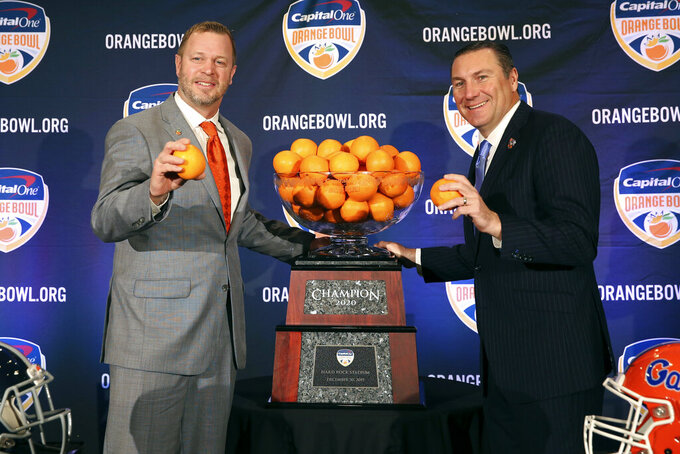 MIAMI (AP) — University of Virginia junior Charles Snowden recalls that when he first arrived on campus, new acquaintances were disappointed to learn he was a linebacker rather than a power forward.

But now that the Cavaliers (9-4, No. 24 CFP) are about to play No. 6-ranked Florida in the Orange Bowl, strangers are excited to meet a football player, Snowden said.

Virginia's trip to the Orange Bowl shows how far the program has come, and Monday night's game will offer a gauge of where it might be headed.

“We understand the history Virginia has had,” Snowden said. “We were not a big name in college sports, so we hear a lot of what people say. A lot of us just kind of laughed it off. If I had heard the name Virginia a couple years ago, I'd have probably had the same reaction. So we're going to go out there and prove it's a new team and a new era.”

“We don't get to play again until September,” coach Dan Mullen said. “That's a long time to sit around. So if you have the opportunity to finish the season with a win, I think it really kind of bolts you into the next season.”

The Cavaliers are making their Orange Bowl debut, and a win would be the biggest bowl victory in school history. They would crack the AP Top 25 and finish the season ranked for the first time since 2004.

“This is the next step for our program, and we can’t wait to capitalize,” coach Bronco Mendenhall said. “We are a program that is developing, rising, growing and becoming.”

Football still doesn't match the popularity of a basketball team that won the national championship in April, but Mendenhall has revived a program that went 2-10 in his first season in 2016. This year the Cavaliers ended a streak of 15 consecutive losses to rival Virginia Tech and earned their third consecutive bowl berth.

The Gators, however, are 14 1/2-point favorites. A win would give them a second consecutive Top 10 finish under second-year coach Mullen, who has quickly returned Florida to supremacy in the football-crazed Sunshine State.

“That's really huge for us,” quarterback Kyle Trask said. “Coach Mullen’s thing is that’s how it should be. That’s the Gators standard. We need to be the best team in the state every single year. This past couple of years is letting everybody know Florida is back on the map like it should be.”

The lightly recruited Trask came off the bench to lead a comeback victory at Kentucky in September. The next week he made his first start since he was a high school freshman, and he quickly became the triggerman for a potent offense.

The junior's passer rating of 159.24 is the highest at Florida since Tim Tebow led the nation at 164.2 in 2009. Center Nick Buchanan attributes Trask's surprising success to hard work that dates to when both were freshmen.

The Cavaliers, who gave up 62 points to Clemson in their Atlantic Coast Conference title game loss, now face the challenge of dealing with Florida's deep receiving corps.

For the first time since 1993, four Gators have at least 35 catches and four touchdowns. The 150-yard receiving mark for the season has been surpassed by nine players, the most at Florida since at least 1990.

“One of the first things that jumps off the film when you study Florida's offense is just how many really good athletes are in space, and how frequently the ball is delivered accurately and effectively in well-designed plays,” Mendenhall said. “It'll be a challenge for us and will require a lot of innovation, a lot of coaching on our part to try to neutralize that.”

Neither team has an All-American, but two of the nation's best pass rushes will be on display.

“It's about switching up the patterns and being able to get the O-line a little bit twisted up,” linebacker Zane Zandier said. “It has been big for us this year.”

Now that Mullen is the first Gators coach to win at least 10 games in each of his first two seasons, speculation has begun regarding the possibility of an NFL team luring him away.

“Those are nice compliments,” Mullen said Sunday. “In the coaching profession, a lot of times they're making comments on you one way or the other, right? They either need to get rid of you, or you're going somewhere else. So it's always better to be on the latter of those two.”

Mullen also said: “I think everybody knows how much I love being a Florida Gator."