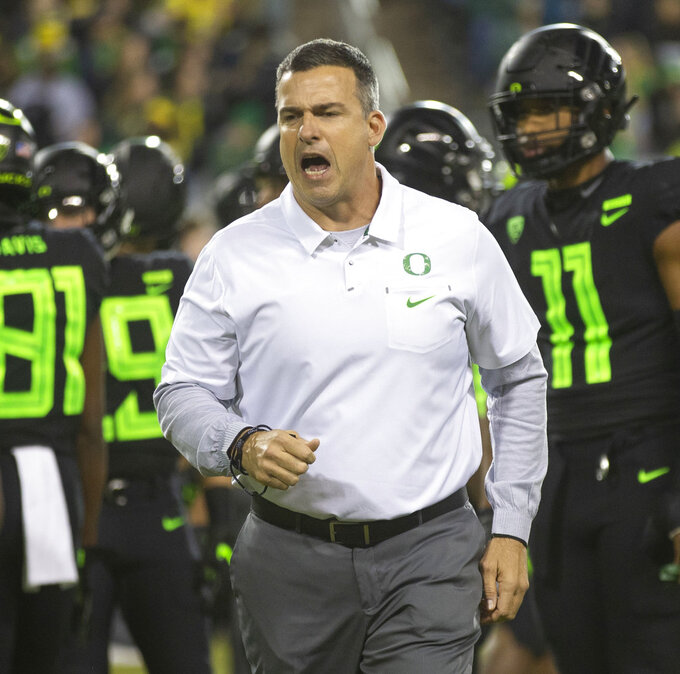 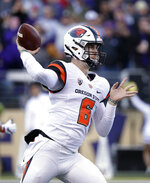 Unlike past years, not a whole lot is on the line for this Friday's Civil War game between Oregon and Oregon State.

No Pac-12 championships, no Rose Bowls. The Ducks look to perhaps improve their bowl prospects. The Beavers' season ends regardless of the outcome.

But there are bragging rights.

"It's important for our players to understand how important this game is for everyone in this state. Houses divided, families divided. And that goes with the territory in a rivalry game," Oregon coach Mario Cristobal said. "The motivation for us is extremely high. We didn't do too well the last time we were over there. So we talk about a lot of things that are motivating factors, but our team is motivated."

The Ducks (7-4, 4-4 Pac-12) are bowl-eligible but the most they can finish with is eight wins. It is looking increasingly likely that they'll land either in the Redbox Bowl or the Sun Bowl, but a win in the Civil War might get them a bid from the Holiday or Alamo.

Oregon's future also relies a bit on the results of the Apple Cup. If Washington State wins, then wins the Pac-12 championship and somehow lands a spot in the College Football Playoff, the Cougars would play in the one of the designated semifinal bowls. And the Rose Bowl would choose the representative from the Pac-12.

But that's getting ahead of ourselves.

The Beavers (2-9, 1-7) would like more than anything to collect another win in coach Jonathan Smith's first season. The former Oregon State quarterback was urging a level-headed approach.

"If you're going to play your best, you want the approach to be consistent," Smith said. "Emotions do run high in rivalry games, but once you get into the game it comes down to execution."

Friday will be the 122nd meeting between the two teams. Oregon has won nine of the last 10 meetings and holds a 64-47-10 all-time advantage.

A few highlights — and lowlights — from past Civil Wars.

LAST YEAR: Oregon State capped a turbulent year with a 69-10 loss to the Ducks at Autzen Stadium. Beavers coach Gary Andersen had abruptly left the team in the middle of the team's one-win season. Royce Freeman ran for 122 yards and two touchdowns and Justin Herbert passed for 251 yards and three scores. It was the final game of a one-year stint as head coach for Willie Taggart, who left for Florida State in early December.

EARLY DAYS: Oregon State, then Oregon Agricultural College, won the first one 16-0 in a showdown between the "Farmers" and the "Lemon-Yellows" in front of some 500 fans. In 1916, Oregon beat OAC 27-0, giving the Ducks a 6-0-1 regular-season record and their first appearance in the Rose Bowl, where they topped Penn 14-0.

PYRAMID PLAY: The 1933 game was notable because Oregon's extra-point attempt was blocked by Clyde Devine, who was lifted in the air by his teammates. The Ducks nonetheless defeated Oregon State 13-3, and the so-called Pyramid Play was later banned by the NCAA.

TERRY BAKER: In 1962, the Beavers and their Heisman Trophy-winning quarterback trailed 17-6 at halftime but dominated the second half. Terry Baker's 13-yard touchdown pass to Danny Espalin in the fourth quarter sealed a 20-17 victory. Baker was the only Heisman Trophy winner from an Oregon school until Oregon quarterback Marcus Mariota in 2014.

TOILET BOWL: A futile 0-0 tie on a blustery and wet day in November 1983 featured 11 fumbles, five interceptions and four missed field goals. It would go down as the last scoreless Division I college football game.

"It was almost like neither team wanted to win," Oregon coach Rich Brooks was quoted as saying.

ROSE BOWL BOUND: The Ducks entered the 1994 Civil War tied with USC for the Pac-10 championship and needed a win to clinch their first Rose Bowl berth since 1957. Trailing 13-10, Danny O'Neill drove the team 70 yards, hitting Dino Philyaw for a 19-yard touchdown with 3:47 to play, giving Oregon a 17-13 victory.

THE FLY SWEEP: The Beavers snapped a 10-game winning streak for the home team in the 2007 Civil War when freshman James Rodgers scored on a fly sweep for a 38-31 double-overtime victory. On Oregon's chance to answer, the Beavers stopped Jonathan Stewart on fourth-and-1 from the 16.