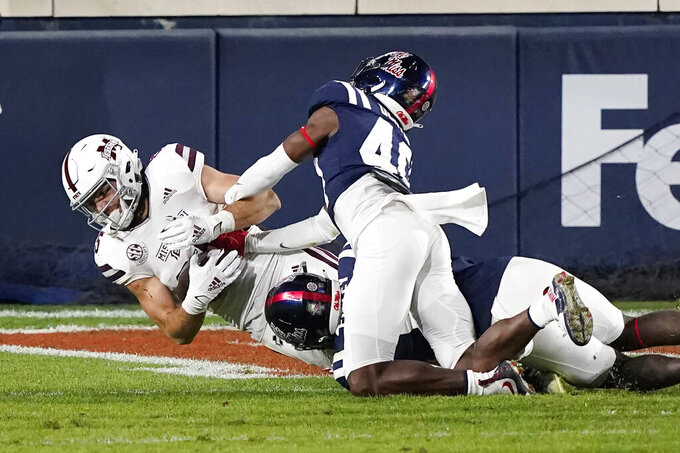 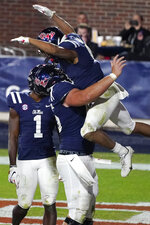 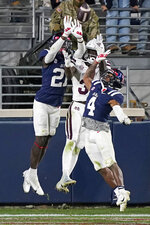 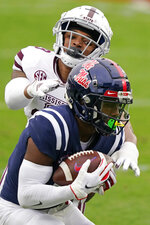 OXFORD, Miss. (AP) — Matt Corral threw for two touchdowns as Ole Miss raced to a 14-0 first quarter lead and held off a late Mississippi State surge Saturday to defeat the Bulldogs 31-24 in the Egg Bowl rivalry.

Ole Miss (4-4, 4-4 Southeastern Conference) snapped a two-game losing streak in the rivalry, erasing last year’s painful one-point loss after Elijah Moore drew an unsportsmanlike conduct penalty in the end zone, pushing back a PAT that failed in the final seconds.

“Last year is in the past. We got the Egg (Bowl trophy). That’s all that matters,” Moore said. “It’s a blessing. I didn’t think about last year. I just played the game today and I can’t thank God enough.

Saturday, Moore responded with 12 receptions for 139 yards, including four catches to convert on third and fourth downs. Moore entered the game leading the nation in receptions (10.6 per game) and yardage (159.3).

Corral was 24 of 36 passing for 385 yards with touchdowns of 81 yards to Braylon Sanders and 48 yards to Dontario Drummond as Ole Miss built a 21-7 second quarter lead and never trailed. Snoop Conner and Jerrion Ealy added touchdown runs of 1 and 8 yards, respectively.

Freshman Will Rogers threw three touchdown passes for Mississippi State (2-6, 2-6) including 6 and 11 yards to Malik Heath. Rogers finished 45 for 61 passing for 440 yards and pulled the Bulldogs within 24-21 on a 7-yard strike to Austin Williams in the fourth quarter.

Rogers directed Mississippi State to an opportunity on the final play from the Ole Miss 36-yard line, lofting a pass to the end zone that was knocked down by A.J. Finley.

“I was proud of our effort and the way that we finished,” Mississippi State coach Mike Leach said. “We just have to keep scratching and clawing.”

Trailing 7-0 in the first quarter, Mississippi State answered with a potential game-tying touchdown drive. Receiver Austin Williams caught a pass at the Ole Miss 3-yard line, but was stripped by safety Tylan Knight before crossing the goal line. Cornerback Deane Leonard picked up the spinning ball in the end zone and returned it 84 yards. Conner scored on a 1-yard touchdown run five plays later, giving Ole Miss a 14-0 lead they never surrendered.

Mississippi State: A rivalry loss was disappointing, but not unexpected in the start of an extensive rebuilding job for coach Mike Leach. The Bulldogs have improved in November, despite playing consecutive games with less than 50 players on the active game roster. Freshmen, sophomores and first-year newcomers dominated the playing time, highlighted by Rogers.

Ole Miss: Coach Lane Kiffin took a low key approach to the rivalry game with media and fans, but the Rebels surged to a 14-0 first quarter lead and made it stand up. Corral wasn’t spectacular, but was good in clutch situations as the defense turned in its best performance of the season, limited Mississippi State to 39 yards rushing and a turnover that set up an early touchdown.

Mississippi State youth showed up huge against the Rebels, led by Rogers. However, sophomore linebacker Shawn Preston had a game-high 12 tackles and freshman wide receiver Jaden Walley broke an assortment of school records with nine catches for 176 yards, including a 44-yard reception.

For Ole Miss, the sophomore running back tandem of Ealy and Conner was joined by freshman Henry Parrish to account for 151 yards and two touchdowns on 32 carries. Finley, a sophomore safety, secured the win on the game’s final play.

Mississippi State: The Bulldogs host Auburn on Dec. 12 after a bye week.

“It will be like the last unsolicited bye week we had,” said Leach with tongue in cheek. “We’re shorthanded (47 active game roster) so maybe we can gain some ground in that area.”

Ole Miss: The Rebels visit No. 5 Texas A&M on Dec. 12, after being originally scheduled for Nov. 21.

“It comes down to being focused (during the bye week) for us,” Corral said. “We have to stay that way. We can’t afford anything else because we know we need to win out.”