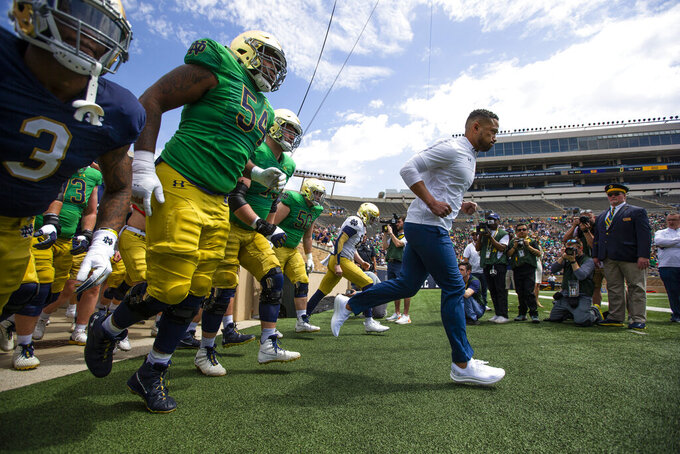 True freshman quarterback Steve Angeli’s 10-yard dash and dive to get the ball past the pylon on the final play for the touchdown gave the Gold a 13-10 comeback victory over the Blue before 33,754 fans at Notre Dame Stadium last weekend.

“To end it like that, you couldn’t have scripted it any better,” said the 36-year-old Freeman, who succeeded Brian Kelly in December. “This group has a lot of momentum right now. We have to continue to form our identity, but it’s really good to end it that way.”

There are 133 days between Saturday’s spring game and Notre Dame’s season opener Sept. 3 at Ohio State, where Freeman played linebacker. Freeman and his rebuilt staff — only he, offensive coordinator Tommy Rees and defensive secondary coaches Chris O’Leary and Mike Mickens remain from Kelly’s 2021 team — seem to have meshed well since a bowl game loss to Oklahoma State.

“We will learn from the spring – teaching and evaluation – and see where we need to improve by June,” said Freeman, who has seven new assistants, including returning offensive line guru Harry Hiestand.

Freeman also intends to reach out to other head coaches, past and present, and also in his own building where 52-year-old Al Golden, who played under Joe Paterno at Penn State and was a head coach for 10 seasons at Temple and Miami, has taken over the defense Freeman directed for Kelly.

“How do I become a better coach?” Freeman said. “You talk to people that are current or former coaches. You look at the spring. You find areas (which need) improvement and address them in June and July.”

Sophomore quarterback Tyler Buchner looked to be pulling away from junior Drew Pyne in the race to start when he turned an ankle last week. Angeli looked sharp in the spring game.