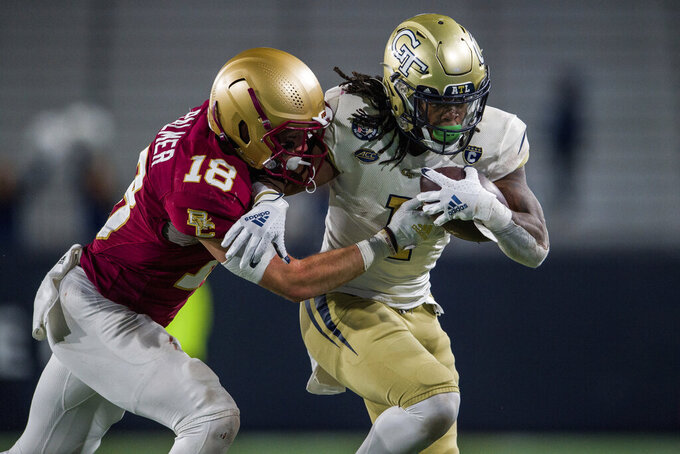 ATLANTA (AP) — Georgia Tech running back Jahmyr Gibbs, who finished third in the nation in all-purpose yards, announced plans on Monday to enter the transfer portal.

“After a long and hard process and talks with my family, I have decided to enter the transfer portal,” Gibbs wrote, adding “I have loved my time here at Georgia Tech.”

Gibbs said he has made “life long friends” with teammates and coaches, including running backs coach Tashard Choice. “Thank y’all for believing in me and showing me nothing but love through the good and bad times.”

Gibbs made the announcement two days after Georgia Tech completed a 3-9 season with a 45-0 loss to No. 1 Georgia. Gibbs ran for only 1 yard on two carries before suffering an undisclosed injury that prevented him from returning in the second half.

Georgia Tech finished with six consecutive defeats, including back-to-back losses to No. 6 Notre Dame and Georgia by a combined 100-0 margin.

On Monday, athletic director Todd Stansbury released a statement to fans in which he expressed his disappointment in the season. He said Collins, who has posted three consecutive three-win seasons, has made progress.

“Our performances in the final two games of the season were especially disappointing and were a step back,” Stansbury said. “However, progress was still apparent at many points during the course of the season ... That does not make the final results any less frustrating or disappointing, but the margin for error has been shrunk significantly. We now need to close it.”

Stansbury said he and Collins “are working together to address why we fell short of our standards and what needs to be done to ensure that our standards are met going forward. This began yesterday with staff changes that will bring new leadership to both sides of the ball. Together, we will do what we need to do for this program to be successful under coach Collins’ leadership.”