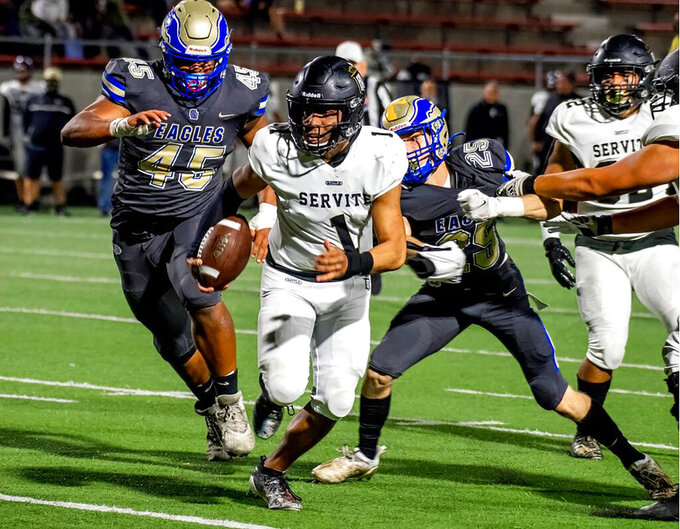 Hero Kanu realized this college football thing was serious when Penn State offered him a scholarship before he had ever played a snap.

He was 15 and still living at home in Germany.

“That was the moment where I was like, ‘OK, now I really have to get into it and develop myself, not only football skills but language and American academics.’ So we looked for a high school,” Kanu told The Associated Press.

The 17-year-old Kanu is the cream of the international crop of recruits expected to make their decisions when the early signing period begins Wednesday. The 6-foot-5, 290-pound defensive lineman’s shortlist is the envy of any kid who dreams of playing big-time college football: Georgia, Notre Dame, Oklahoma, Ohio State and USC.

Schools from the Power Five conferences have increasingly tapped a European pipeline for young talent. Recruits from Germany, Sweden, Denmark and Britain are expected to sign with programs including Michigan, Vanderbilt, West Virginia, Illinois and Texas A&M.

Brandon Collier, founder of PPI Recruits, estimated that 10 Europeans this cycle will sign to play at Power Five schools — up by a few from last year. Nearly all of them are his recruits.

Across Division I more generally, though, the trend is shifting after several years of steady growth. Coaches are becoming choosier as more college players enter the transfer portal or gain an extra year of eligibility because of the coronavirus impact.

By the traditional signing date in February, Collier estimates that up to 20 Europeans will be signed to Division I programs overall — about on par with the past two years.

There was no hesitation on Kanu, though, a “three-technique” lineman who can play every down.

“In terms of recruiting and rankings, he's the biggest European recruit ever,” said Collier, who began working with Kanu less than three years ago after the teenager outgrew soccer in his hometown near Munich.

Penn State’s offer came on the recommendation of Collier and before Kanu enrolled at Santa Margarita Catholic High School in Southern California's Orange County. After he played his first-ever game this spring, more offers began piling up.

On Collier's college tour in June, he met Alabama coach Nick Saban and called it “a great moment in my life,” although the Crimson Tide didn't make Kanu's shortlist.

“It will come down to the developmental aspect, on and off the field,” Kanu said.

The comfort level with coaches is another factor. He ruled out LSU because of the coaching change there — and added USC to his list after Lincoln Riley was hired.

“USC of course with Lincoln Riley there, he was one of my main recruiters at Oklahoma, so USC is really appealing too," Kanu said. "It’s super hard to decide.”

Kanu picked up another honor by being selected to play in the All-American Bowl — an all-star game of the top high school players — on Jan. 8 in San Antonio. He will sign Wednesday but doesn't plan to announce his decision until the all-star game.

Kanu was such a fast learner, Collier said, that he would have Kanu handle overflow kids at his camps in Europe, teaching techniques on drills. Kanu recalled that, describing it as “super fun,” which is also what he says about crunching running backs and quarterbacks.

“It sounds bad, I know, but I like hurting people,” he said with a laugh during a phone interview from California. “If you are frustrated or something, you get to take out your anger. You make a big family, too. You hang out, you make a lot of friends.”

Another German defensive end, Aric Burton, has committed to West Virginia, continuing a European trend for the Mountaineers.

Lucas Simmons, a 6-foot-8 offensive tackle from Sweden, has more than 30 offers but may wait for the class of 2023, Collier said.

Many of Collier's recruits go straight from Europe to college, but others also go to prep schools. That's been the game plan of Gridiron Imports, which placed German tight end Marlin Klein at a Georgia school. Klein has since committed to Michigan.

What is worrying, said Gridiron co-founder Chris Adamson, is the dwindling number of scholarships.

“The transfer portal is the biggest monster out there for all high school kids,” Adamson said. “Schools are fishing in that pool rather than looking to develop a kid. Just like every other high school kid in America, European kids are dealing with that plus the stigma of being international. It’s gotten way more difficult.”