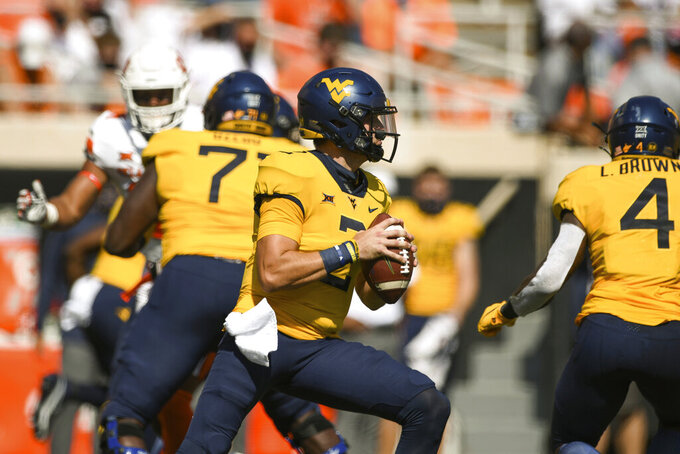 West Virginia quarterback Jarret Doege (2) looks for a receiver during the first half of the team's NCAA college football game against Oklahoma State on Saturday, Sept. 26, 2020, in Stillwater, Okla. (AP Photo/Brody Schmidt)

South Alabama called off its Saturday game with Sun Belt rival Troy because of COVID-19.

The school on Tuesday didn’t say how many players had been affected by the coronavirus, but the team was stopping workouts.

South Alabama, Troy and the league will try to find a makeup date.

“This postponement is unfortunate, however it’s prudent and wise,” South Alabama athletic director Joel Erdmann said. “Our most significant concern is the wellbeing of our student-athletes.”

Purdue University has suspended 14 students — 13 of them athletes — for violating the Protect Purdue Pledge by attending a party Saturday in a residence hall.

The students must vacate the dormitory by Wednesday though they can file an appeal.

All of the athletes compete in winter or spring sports, athletic department spokeswoman Kassidie Blackstock confirmed. Blackstock declined to identify which teams will be affected.

It’s the second time Purdue has suspended a group of students for not following the school’s COVID-19 guidelines. The university suspended 36 students on Aug. 20.

“On one hand, we are glad to have had only two of this type of incident in six weeks,” Purdue President Mitch Daniels said in a statement. “But we will deal with any such violation with firmness. The fact that this episode involved student-athletes can make no difference. At Purdue, we have one set of rules for everyone.”

The 29-year-old player who joined the team from Bayern Munich this month will now self-isolate.

He made his Liverpool debut in a 2-0 Premier League win at Chelsea but missed Monday’s 3-1 victory over Arsenal.

La Salle has cut seven sports, effective at the end of the academic year, in a move affecting approximately 130 athletes.

The Philadelphia-based university sliced men’s baseball, swimming and diving, tennis and water polo. It also cut women’s softball, volleyball and tennis. The university announced the move in an open letter on its website.

The cuts drop La Salle’s intercollegiate athletics teams from 25 to 18.

The statement said the university could no longer sustain an athletics department that offered more Atlantic 10-sponsored teams than any other in the conference at a school positioned in the conference’s bottom-quartile in enrollment.

La Salle added, “the impacts of the COVID-19 pandemic further accelerated the need for this change.”

The university said keeping the programs in the current climate “would have required a financial commitment of at least $100 million in endowment, scholarship aid, and capital investment.”

The programs will compete during this academic year, assuming conditions permit.

AMHERST, N.Y. — The University at Buffalo says 25 athletes, including 19 football players, have tested positive for the coronavirus.

Athletic director Mark Alnutt says five members of the women’s volleyball team and one women’s soccer player also tested positive. Alnutt says the athletes have been placed in isolation and are doing well.

All three teams have suspended activities through at least Monday.

The spike in cases at Buffalo comes after an athlete reported symptoms consistent with COVID-19, which led to the school testing 322 players.

Previously, Buffalo had only eight athletes test positive from more than 1,300 tests conducted from June 12 to Sept. 20.

The suspension of football practice comes five days after the Mid-American Conference agreed to play a six-game schedule, starting on Nov. 4.

MORGANTOWN, W.Va. — West Virginia University will allow the general public to attend football games at a reduced capacity next month.

WVU athletic director Shane Lyons said attendance will be limited to about 15,000 fans — or 25% capacity — starting with the Oct. 17 home game against Kansas. Currently, only the families of players and coaches as well as essential game operations staff are allowed to attend.

Fans entering the stadium will be required to wear masks.

“Needless to say, we are excited to open our gates and welcome Mountaineer fans back to the stadium,” Lyons said.

The university resumed in-person undergraduate classes on Monday. Classes had been moved to online only earlier this month due to an increase in coronavirus cases.

The NFL says the Tennessee Titans and Minnesota Vikings are suspending in-person activities after the Titans had three players test positive for the coronavirus, along with five other personnel.

The league said Tuesday that both clubs are working closely with the NFL and the players' union, including their infectious disease experts, on tracing contacts, more testing and monitoring developments.

The Titans (3-0) are scheduled to host the Pittsburgh Steelers (3-0) on Sunday, and the NFL says all decisions will be made with health and safety the primary consideration.

The Titans first announced Tuesday morning that they would be working remotely “out of an abundance of caution” after several test results came back positive. They beat the Vikings in Minnesota 31-30 on Sunday without outside linebackers coach Shane Bowen after a test result Saturday.

Coach Mike Vrabel said Monday that Bowen was not with the team. Rookie offensive lineman Isaiah Wilson has been on the reserve/COVID-19 list for the Titans since Sept. 6.

One of the oldest annual tournaments in ice hockey, the Spengler Cup, has been canceled.

Organizers of the event held in Davos, Switzerland, during the December holidays cite the impact of the pandemic.

The invitational tournament was first played in 1923, and a six-team edition was won last year by Team Canada, comprising of mostly Europe-based players.

Travel to and from Switzerland “for the teams from Finland, Russia, the Czech Republic and Canada is currently only possible under strict adherence to the quarantine policies, if at all,” organizers say.

Though Swiss authorities are allowing more fans to attend hockey games from October, standing areas in stadiums cannot be used.

Spengler Cup organizers say games “in a half-empty stadium, and without standing room, has nothing in common with the hockey festival we have become accustomed to.”

The Swedish government has decided to increase the number of spectators allowed to attend sporting events from 50 to 500 as of Oct. 15.

Swedish Sports Confederation chairman Bjorn Eriksson says the decision is “a step in the right direction.”

The exemption applies as long as there is no increased spread of infection in the country.

Sweden has opted for a much debated COVID-19 approach of keeping large parts of the society open. People in the Scandinavian country kept enjoying many freedoms while most of Europe locked down their populations early in the pandemic by closing schools, restaurants, fitness centers and even borders.