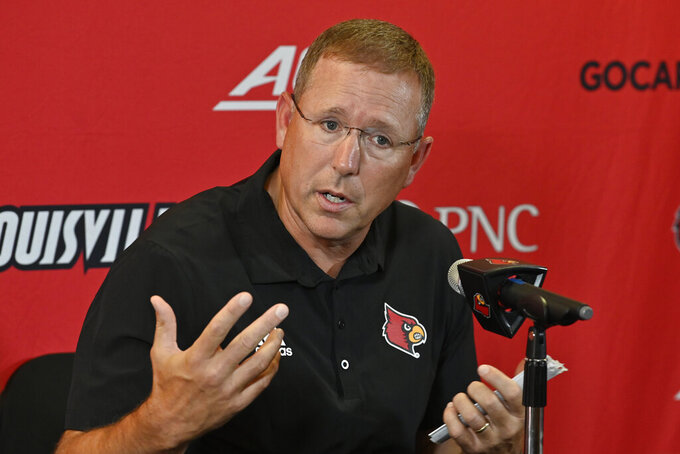 The fourth-year Cardinals coach acknowledged he had reflected on several close losses last fall after leading in the fourth quarter. But Satterfield has also stressed positives to overshadow those disappointments. Though Louisville (6-7, 4-4 Atlantic Coast Conference) posted its second consecutive losing finish, it improved from 4-7 in a pandemic-marred 2020 to reach its second bowl game in three years.

As Satterfield accentuates the positives, he hopes the painful lessons of those narrow defeats motivates his players to finish off opponents.

“All these things just resonate in our heads, so every day when they come to train, that’s what they’re thinking about,” Satterfield said earlier this month. “To know that we are close, I think it gave our guys a little bit of a confidence to know that we can compete with anybody in this league.”

Louisville's optimism stems from having 17 starters back, including 10 from a defense that registered 33 sacks and intercepted 10 passes. The coach wants them to be stingier with yards and points than they were last fall, especially in the final 15 minutes.

Improvement in those latter areas could mean more opportunities for a Cardinals offense that showed it can light up the scoreboard and fill the stat sheet.

In fact, dual-threat quarterback Malik Cunningham believes Louisville is capable of being more explosive. That would be a huge challenge for opponents considering the Cardinals ranked 21st nationally in total offense (446.4 yards per game) and tied for 41st in scoring (31.6 points).

Of course, Cunningham played a huge role in that proficiency by throwing for 2,841 of his 3,872 yards from scrimmage and rushing for 20 of his 39 touchdowns. The goal for the four-year starter is having more victories to show for it.

“This season I want 10 wins for sure,” Cunningham said of his goals. “Just being consistent. That’s been the biggest thing coach Satt has been preaching to me and all the other coaches.”

Cunningham maintained a 60% completion rate for the third consecutive season while posting career highs in passing and rushing yardage. His reduction in turnovers also symbolized his improved poise, and he enters this season less inclined to take off running.

“I feel like I’ve been a lot more patient,” Cunningham added. “That just goes back to the guys up front and having confidence in them. They’ve been around me for three years, and we’re going to make this thing work this year.”

Two of Louisville's top receivers are back. Tight end Marshon Ford, who had team highs of 49 catches for 550 yards with two TDs, and Ahmari Huggins-Bruce (29, 444, 4TDs.) The transfer portal yielded ex-Miami (Florida) receiver Dee Wiggins, who ranked fourth on the Hurricanes with 31 catches and 358 yards with three scores.

Lance Taylor arrived from Notre Dame in the offseason as offensive coordinator, looking to boost Louisville’s situational play. Wesley McGriff takes over the secondary after working at Florida and Auburn the past three seasons, while Josh Stepp will handle the tight ends following a season as Georgia State’s OC.

Two key players are back from season-ending knee injuries. Linebacker Monty Montgomery, Louisville’s sacks leader in 2019 and ’20, is confident to get going again alongside last year's top pass rusher Yasir Abdullah (10 sacks). Junior receiver Braden Smith, who was third with 27 receptions for 370 yards in 2020, gives Cunningham another target after his promising sophomore season (11 catches, 68 yards, one TD) was cut short.

Louisville opens ACC play early with a Sept. 3 showdown at Syracuse, followed by a non-conference challenge at UCF. The Cardinals also visit Virginia (Oct. 8), which has won the past two against them, and perennial league favorite Clemson (Nov. 12) in search of their first series win in eight meetings. Pitt (Oct. 22) and N.C. State (Nov. 19) visit in key ACC games. Louisville also aims to halt a four-game slide at archrival Kentucky (Nov. 26), a tall task considering the Wildcats have won the past three meetings alone by a 153-44 margin.