No. 19 Arkansas hosts No. 23 Cincinnati in marquee opener 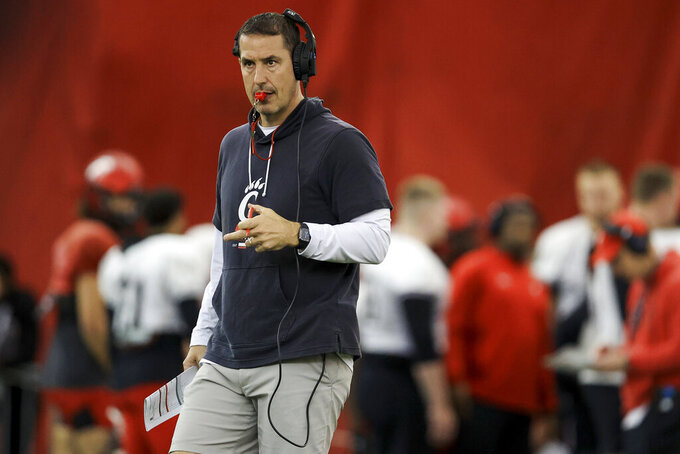 FILE - Cincinnati head coach Luke Fickell stands on the field during an NCAA football intrasquad scrimmage, Saturday, April 9, 2022, in Cincinnati. The sixth-year Cincinnati coach is tasked with following up a historic 2021 season that saw the Bearcats become the first team outside a Power Five conference to crack the College Football Playoff. (AP Photo/Aaron Doster, File)

Line: Arkansas by 6 1/2, according to FanDuel Sportsbook.

The implications of this game loom large for both teams. A marquee road victory over a ranked SEC opponent would make an opening statement for Cincinnati. The Razorbacks, who play what many consider to be the toughest schedule in the country, would send a signal to the nation that their 2021 season was no fluke with a win. A loss for either team will likely result in dropping out of national rankings.

Arkansas led the SEC with 227.8 rushing yards per game in 2021 — seventh-best in the nation. The Razorbacks boasted four players with 500-plus rushing yards and five-plus rushing touchdowns, the only FBS team to do so. Three of those players are back in K.J. Jefferson, Raheim Sanders, Dominique Johnson along with a veteran offensive line. For Cincinnati to limit big runs and keep the Razorback offense on the sideline, linebackers Ivan Pace, Wilson Huber and Deshawn Pace must be quick to the ball and tackle well.

Cincinnati: C Jake Renfro elevated himself to first-team All-American Conference status in 2021. He started all 14 games in 2021 and is one of five returning starters from an offensive line that surrendered only 1.86 sacks per game. He was a cornerstone of an offense which owned the nation’s ninth-highest yards per play average (6.71 yards).

Arkansas: WR Jadon Haselwood is the frontrunner to fill a void left by star receiver Treylon Burks, who was the Tennessee Titans’ first-round draft pick. Haselwood was listed by many outlets as the nation’s top rated wide receiver out of high school in 2019. He was with Oklahoma for three seasons but missed most of 2020 due to injury. He tallied 62 receptions for 736 yards and seven touchdowns as a Sooner.

This is the first meeting between Arkansas and Cincinnati. ... Arkansas has never opened with a ranked-vs-ranked game in Fayetteville. ... The Bearcats lost nine players to the 2022 NFL Draft, which ranked third among all schools... Cincinnati TE Josh Whyle has caught a touchdown pass in each of the past two Bearcat season openers. ... Arkansas returns an offensive line with 99 career starts, which ranks the second in the SEC.