No. 24 Iowa taking nothing for granted against Illinois 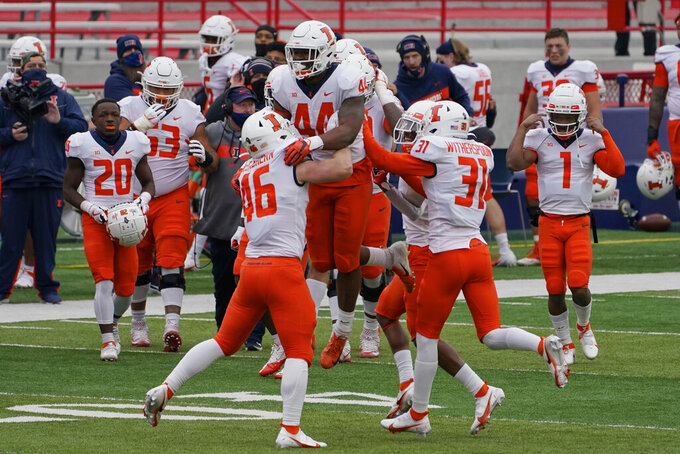 Illinois linebacker Tarique Barnes (44) celebrates with teammates after he intercepted a pass by Nebraska quarterback Luke McCaffrey during the first half of an NCAA college football game in Lincoln, Neb., Saturday, Nov. 21, 2020. (AP Photo/Nati Harnik)

CHAMPAIGN, Ill. (AP) — Iowa coach Kirk Ferentz is taking nothing for granted after seeing what Illinois did to a Nebraska team his Hawkeyes hung on to beat 26-20 last week.

The Illini beat the Cornhuskers 41-23 two weeks ago and were idle this past weekend after their game against Ohio State was canceled due to a COVID-19 outbreak among the Buckeyes.

The No. 24 Hawkeyes (4-2, all Big Ten) are seeking their first five-game winning streak in five years, and their seventh consecutive win over Illinois (2-3). Iowa has won six straight meetings dating back to 2008, already their longest streak in series history.

Illini quarterback Brandon Peters, whose play against the Huskers was his first time on the field since the season opener because of COVID-19 issues, threw for 205 yards and a touchdown to improve to 7-5 as a starter. Four others took a crack at the quarterback position, with minimal success, while Peters was out.

“The last time out when they had their quarterback back in and were able to do the things they wanted to do, they did them extremely well against a team that we struggled to beat the other day,” Ferentz said. “It was an impressive outing when they were with Nebraska, and that’s the Illinois team we’re trying to get ready for.”

The Hawkeyes have outscored their last four opponents by a combined 151-55 and are averaging 37.8 points per game.

“Our goal at the start of the season wasn’t to be 4-2, but four weeks ago that was the best we could do,” Ferentz said. “I’m proud of what they’ve done the last four weeks.”

Spencer Petras will make his seventh consecutive start at quarterback for Iowa. He has completed only 56.3% of his passes for 1,138 yards, four touchdowns, and five interceptions. The backup quarterback for the Hawkeyes is Alex Padilla.

For Illinois, Peters continues to impress and should be looking for his main target, WR Josh Imatorbhebhe, who leads Illinois with 15 catches for 215 yards and two scores through five games.

Illinois coach Lovie Smith expects a physical game given the history between the two teams. He also said missing out on the Ohio State game hasn’t posed any problems in terms of getting ready.

“We were excited to play one of the best teams in the country,” Smith said of Ohio State. “But when the league made its decision, we moved on and began thinking about Iowa.”

“They really embarrassed us last time they played us at home. So it doesn’t take much to get us fired up to play Iowa. We expect a tough physical game,” Smith said. “We’re looking forward to the challenge.”

Iowa running backs Tyler Goodson and Mekhi Sargent have been a solid 1-2 punch. Sargent had two rushing touchdowns last week while Goodson had one. Both will need big days against a tough Illinois defensive front.

Led by Mike Epstein and Chase Brown, Illinois has averaged 222.4 yards per game rushing, second only to Ohio State’ among Big Ten teams. Backup quarterback Isaiah Williams’ 192 rushing yards at Rutgers on Nov. 14 (his first career start) was the most rushing yards by a quarterback in program history. Look for Williams to make a few appearances if the Illini running game is clicking.

The Illini’s win over Nebraska isn’t the only reason Ferentz isn’t taking anything for granted. He knows and respects Lovie Smith’s NFL and college coaching pedigree.

“The biggest thing that impresses me, coach Smith is very established, tremendous football coach, great human being and clearly went in with a vision,” he said. “They have recruited well, and they have had a vision building the program and when you look at him, to me, the thing that really stands out is they have a system in all three phases.”