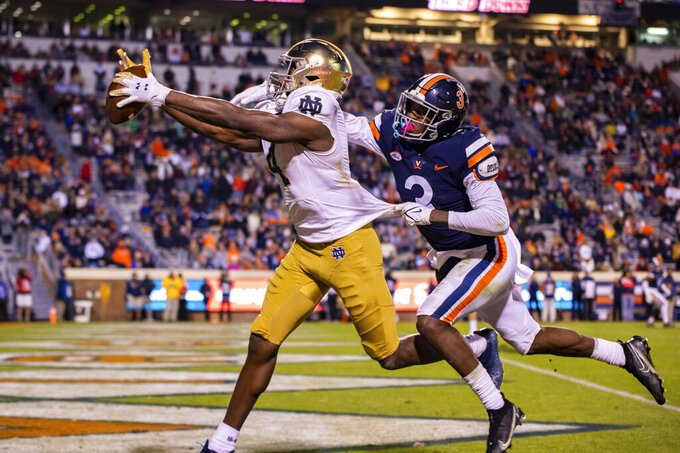 “You’re getting a really, really dangerous football team, one that has finished (its) schedule in the ACC and now plays Notre Dame and Georgia in back-to-back weeks,” Kelly said. “(Georgia Tech) has nothing really to worry about other than just taking a free swing.”

Whether Geoff Collins’ Yellow Jackets (3-7) can deliver a haymaker to the Fighting Irish (9-1, CFP No. 8) is an open question. But Kelly figures they will try.

“If you look at their record, you just kind of scratch your head," Kelly said. "This is a football team that has really good players on both sides of the ball. They get your attention.”

The Yellow Jackets’ season has been wrecked by a four-game skid including last week's 41-30 loss to Boston College. The Eagles scored 10 points in the final three minutes — and it was the sixth time in seven losses that Collins’ young team had a chance to either tie the score or take the lead in the fourth quarter.

“Just finding a way to win close games, that’s been the story of the year,” Collins said. “And obviously nobody’s more frustrated, disappointed, finding every single way to find those one or two plays that are the difference in us winning or losing.”

Notre Dame has won five straight and has not allowed a touchdown the past two games (34-6 over Navy and 28-3 over Virginia). The defense had seven sacks against the Cavaliers.

JACKS OF ALL TRADES

Notre Dame running back Kyren Williams was an AP preseason All-American because of his running, receiving and return talents. He is 19th in FBS in all-purpose yards at 132.7 per game, but will cede the spotlight this weekend to Georgia Tech freshman Jahmyr Gibbs, who is second at 168.0.

“A breakout player,” said Kelly, who believes Gibbs in the ACC Player of the Year.

Gibbs leads Tech in rushing (687) and receiving (474) yards. He has three straight outings of 200 yards or more and has had a play of 50 or more yards in the past six games, including a 98-yard kickoff return for a TD against BC.

Gibbs is listed as a freshman but actually played in seven games in 2020. Because of the pandemic, Gibbs is among 75 out of 124 athletes on the Georgia Tech roster with freshman eligibility. No wonder Collins is focused on the future.

There’s been an outbreak of influenza on the Notre Dame campus and at least a dozen players were hit before the game at Virginia. Kelly said he thinks the team may be turning the corner.

One player remaining healthy has been fifth-year nose tackle Kurt Hinish, who will be playing in a school-record 59th game.

The Irish prepared for two Tech freshman quarterbacks: last week’s starter Jordan Yates and fellow freshman Jeff Sims, who threw for 150 yards on 15-of-26 passing against Notre Dame in 2020 but netted just two rushing yards on 12 carries because of five Irish sacks.

In his fourth start of the season, Yates completed 17 of 28 passes for 126 yards with a touchdown and interception against Boston College and ran for 76 yards, not including 29 yards in sacks. Sims, meanwhile, was seen wearing a protective boot on the sideline.

“Super wired into what we were doing,” offensive coordinator Dave Patenaude said in his critique of Yates. “Great energy … ran the ball fantastic. Made a boneheaded mistake throwing the ball in the end zone. He owns that.”

The Irish will salute a large group of players on senior day that includes quarterback Jack Coan, who graduated from Wisconsin before joining the Irish program in January. In 10 games as Notre Dame’s starter, Coan is 9-1 and has 2,011 yards and 16 touchdowns on 66% passing.

“It’s crazy how quickly it has gone,” Coan said. “It’s going to be emotional, but I’m going to do my best to control those emotions, to focus on the game and soak it all in.”

“To see him come in and have success right away has been unbelievable,” Coan said.