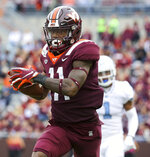 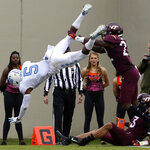 The Hokies themselves actually got much, much more.

In a game that took six overtimes and more than four hours to play, Virginia Tech finally put away the Tar Heels when third-team quarterback Quincy Patterson's two-point conversion run in the sixth overtime propelled the Hokies to a wild 43-41 victory in the longest game in ACC history.

The victory enabled the Hokies (5-2, 2-2 ACC) to keep pace in the race for the ACC's Coastal Division crown and kept the Tar Heels (3-4, 2-2) from jumping to the top of the division.

"I'm just proud of those kids," Virginia Tech head coach Justin Fuente said. "It goes back to a couple of weeks ago (after a 45-10 loss to Duke), and we had to look ourselves in the mirror and talk about how we would handle tough situations. We were certainly in our fair share of them tonight. If they had made one more field goal or whatever, I would still feel the same way about our team. If it had gone another way, I still would've been up here talking about how proud I am of our guys' ability to battle."

The game marked the debut of college football's new overtime rules, which now call for going for two points after the fourth overtime. In the fifth overtime, Virginia Tech had the ball first, but Patterson's pass to Damon Hazelton was broken up by the Tar Heels' Storm Duck, giving the Tar Heels an opportunity to win the game.

North Carolina, though, couldn't convert. Virginia Tech's Khalil Ladler read an option play perfectly and tackled Michael Carter for a loss, sending the game into a sixth overtime. The Tar Heels received the ball first, but quarterback Sam Howell was tackled for a loss, setting up Patterson's game-winning conversion.

The loss spoiled an outstanding game by Howell, who completed 26 of 49 for 348 yards and five touchdowns.

"It hurts when you have to go in and talk to your team when they fought really hard," North Carolina head coach Mack Brown said. "There is nothing really that you can say to them because of losing really stinks. You work way too hard to lose, and it's not worth playing if you lose. When you lose, you have to take it and learn from it. That's what we will do."

Patterson — the Hokies' third-team quarterback coming into the game — played the majority of the second half for the Hokies after starting quarterback Hendon Hooker went down with an injury late in the first half and Fuente elected to replace backup Ryan Willis with Patterson after three series.

Patterson rushed for 122 yards on 21 carries and threw for 54 yards and a touchdown to pace the Hokies.

"After Hendon got the job, and he played a great game against Miami, it's really easy to get down on yourself and think your shot is never going to come," Patterson said. "But I just had to stay in that zone of preparing like I was the starter, and today was that day that I got to play quarterback, so that was pretty cool."

North Carolina: The Tar Heels need to find a way to close out games. Playing in yet another close one — North Carolina has played in six games that have been decided by six points or less — the Tar Heels fell to 2-4 in such contests, misfiring Saturday on an opportunity to take control of the ACC's Coastal Division race.

Virginia Tech: Given up for dead after a 45-10 loss at home to Duke on Sept. 27, the Hokies now have won three straight games heading into a much-needed bye week — one that could allow Hooker to heal from an undisclosed injury. They need only to win two of their final five games to become bowl eligible for the 27th consecutive season.

Virginia Tech: The Hokies are off next Saturday and return to action Nov. 2 at No. 8 Notre Dame.