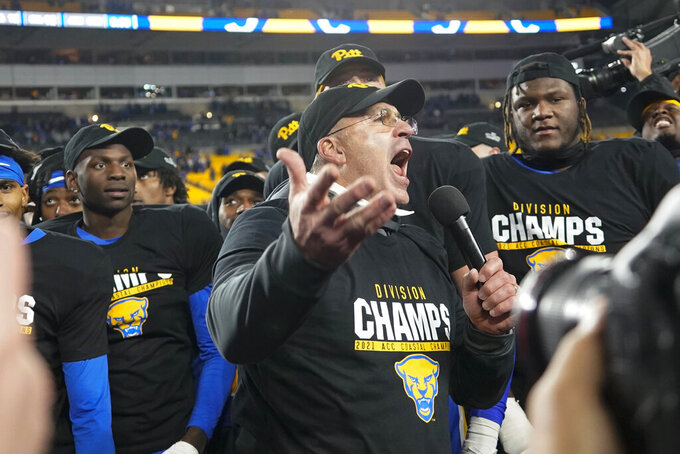 PITTSBURGH (AP) — Kenny Pickett knew a year ago. Something in the Pittsburgh quarterback's gut told him coming back for one more season offered the opportunity to do something special.

Something that looked and felt an awful lot like Pitt's 48-38 victory over Virginia on Saturday, when Pickett, rising star wide receiver Jordan Addison and the 20th-ranked Panthers put to bed the idea that this is the “Same Old Pitt” for now, and maybe for good.

There will be no chaos in the ACC's Coastal Division this year. Not with Pickett re-writing the Pitt record book and Addison making a compelling case that the conversation on who the best receiver in the country is starts with the skinny sophomore with video game moves and understated swagger.

Pickett and Addison connected for four touchdowns, the last a 62-yard catch-and-run with 2:10 remaining that sealed a second Coastal Division title in four years for the Panthers (9-2, 6-1 ACC), a play symbolic of the inherent trust between the two that's made them one of the most dynamic combinations in the country.

Facing third-and-5 from the Pitt 38, Pickett scrambled to his right and threw a jump ball downfield to the 6-foot tall Addison, who outmuscled a defender and then raced to the end zone to put away the Cavaliers and spark a celebration at Heinz Field.

“(Addison) played out of his mind today,” Pickett said. “He made every play.”

The Panthers needed every one of them.

Virginia quarterback Brennan Armstrong matched Pickett throw for throw, passing for 487 yards with three touchdowns and an interception after returning from an injury that forced him to sit out last week's loss to Notre Dame.

Yet every time the Cavaliers (6-5, 4-3) appeared ready to steal one, Pickett and Addison would respond. All four of their scoring connections came in got-to-have-it situations. Twice Pickett found Addison in the end zone on fourth down. The other two scores came on third downs with the Cavaliers threatening to get a stop and reclaim momentum.

“He's a really good player,” Virginia coach Bronco Mendenhall said of Addison. “They used him really well. And wow, right at the end I thought we had an interception and somehow he comes up with the ball. It's tough to defend.”

Addison finished with 14 receptions for 202 yards. His four scores tied Pitt's single-game school record and his 15 touchdowns on the season are tops in the FBS.

“It really just shows me how much trust they have in me to go out there and make those plays," Addison said. “That gives me a lot of confidence.”

A vibe that's not limited to Addison. Pitt made a somewhat unlikely run to the ACC title game in 2018, Pickett's first full year as a starter, and was promptly blown out by eventual national champion Clemson.

The fight should be considerably fairer this time around, whether the Panthers face Wake Forest, N.C. State or get a rematch with the Tigers, whom Pitt beat soundly at home last month.

“I think our kids were happy last time just going there,” Pitt coach Pat Narduzzi said. “But now we get an opportunity to go back to Charlotte, and it’s going to be a different story.”

Armstrong completed 36 of 49 passes and hung tough on a day he absorbed five sacks. Keytaon Thompson provided 143 yards of total offense for Virginia, but the Cavaliers' were often their own worst enemy.

Virginia allowed a kickoff return for a touchdown and committed eight penalties for 65 yards, including a false start that extended a Pitt drive and led to a fourth-quarter touchdown run by freshman Rodney Hammond.

“We've got to play cleaner to win a championship,” Mendenhall said.

Pickett's final start at Heinz Field as a collegian ended with a pair of kneel-downs in the final minute. He used the 59 that came before that to continue to re-write the school record book.

Pickett's 340 yards passing gave him 3,857 on the year, breaking Rod Rutherford's mark of 3,679 for most yards in a single season set in 2003. Pickett is now responsible for 40 touchdowns in 2021, breaking the mark of 39 shared by Rutherford and Hall of Famer Dan Marino.

Virginia: The offense is good enough to compete for an ACC title. The defense is not. The Cavaliers surrendered 509 yards and had no answer for Addison. Whenever the Panthers found themselves in a tight spot, Pickett would look for Addison, who was often in single coverage, a matchup he is going to win far more often than not.

Pitt: Narduzzi’s program finally seems to have achieved a true breakthrough in year seven. The Panthers have their first nine-win season since 2009 with two more games to go before whatever bowl they might land in.

Pitt is likely to rise into the teens when the next poll comes out Sunday. A massive jump is likely out of the question after another narrow victory at home.

Virginia: Welcomes Virginia Tech to Scott Stadium next Saturday. The Hokies have won 16 of 17 against the Cavaliers.

Pitt: Will try to extend its mastery over Syracuse when the Panthers wrap up the regular season on the road next Saturday. Pitt is 7-1 against the Orange since both schools joined the ACC in 2013.