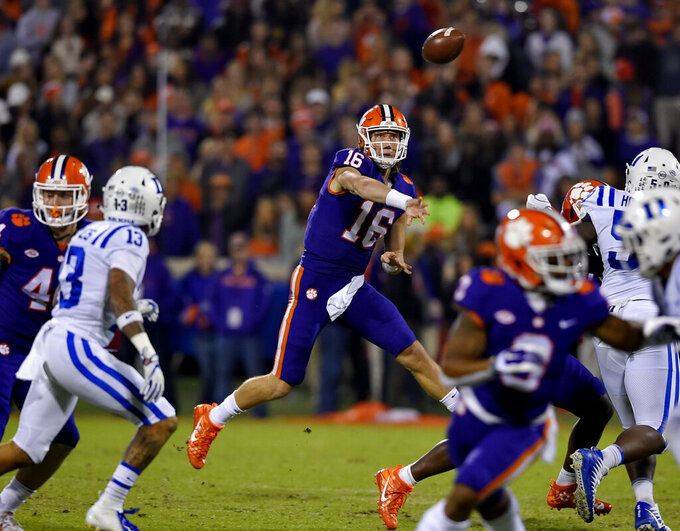 FILE - In this Nov. 17, 2018, file photo, Clemson quarterback Trevor Lawrence throws a pass under pressure during the first half of an NCAA college football game against Duke, in Clemson, S.C. For the first time, the defending national champion Tigers are No. 1 in The Associated Press preseason Top 25 presented by Regions Bank, Monday, Aug. 19, 2019. Clemson won its second national title in three seasons behind freshman quarterback Trevor Lawrence to claim equal standing with Alabama at the top of the sport. (AP Photo/Richard Shiro, File)

Sorry to be a bummer at a time of the year usually reserved for hope and optimism, but there is a decent chance your favorite college team is going to be a big disappointment this season.

The preseason AP Top 25 presented by Regions Bank is out. There were no real surprises at the top. Defending champion Clemson is No. 1 and Alabama is No. 2. The Tigers and Crimson Tide have alternated winning the last four national championships.

The first Reality Check of the season assesses the chances for each Top 25 team to tank.

Reality check: The preseason poll started in 1950. Only two preseason No. 1 teams have failed to be in the final rankings (USC in 2012 was the last). The Tigers have history and, more importantly, Trevor Lawrence on their side.

Opener: vs. Duke in Atlanta.

Reality check: The Crimson Tide have not finished outside the top 10 since Nick Saban's first season. And he's still the coach.

Reality check: In 2013 and '15, Mark Richt's Georgia teams were preseason top 10 and finished unranked. Kirby Smart was brought in to stop that nonsense.

Reality check: The Sooners' path to ruin: The offense regresses from historically great to merely good with Jalen Hurts and the defense remains bad.

Reality check: If Georgia transfer QB Justin Fields is a bust the Buckeyes aren't in position to bail him out.

Reality check: OK, THIS is the year the Tigers open up the offense. What if that's a bad idea?

Reality check: The optimism about the Wolverines has a lot to do with the uncertainty at Ohio State.

Opener: vs. Miami in Orlando, Florida.

Reality check: The Gators' surge last season was inflated by a bowl victory against a Michigan team that sort of checked out.

Reality check: The Irish expect offensive improvement to compensate for some defensive regression. Or, it doesn't and some of last season's one-score victories against so-so opposition go the other way this year.

Reality check: It wouldn't be the first time "Texas is Back!" went bad.

Reality check: High expectations for a team that scored seven points in the RedBox Bowl and went 2-3 on the road last year.

Reality check: The Aggies, along with South Carolina, are the first team in 44 years to have preseason Nos. 1-3 on the schedule. They are a little bad luck away from a 6-6 season.

Reality check: New QB Jacob Eason has not played in a game in two years. He was a five-star recruit. But is he still?

Reality check: The Utes have been great at exceeding modest expectations. Meeting high ones can be a different deal.

Reality check: The Nittany Lions need lots of relatively inexperienced players, including at quarterback, to become stars and leaders.

Reality check: Failing to meet expectations is pretty much Auburn being Auburn. Then again, so is exceeding them.

Reality check: The Spartans scored 32 points in their final four games last season. Coach Mark Dantonio is banking on a shuffled, though not new, offensive staff and better health at quarterback and receiver to fix it. Good luck.

Reality check: The Badgers were last season's big bust, going from preseason No. 4 to unranked. Maybe it wasn't a fluke?

Reality check: There's a reason the Cyclones are in the preseason rankings for the first time since 1978. Winning in Ames is hard and doesn't happen very often.

Reality check: The Orange rode 31 takeaways, third-best in the nation, and a plus-13 margin (fifth best) to 10 victories last season. Regression is an uninvited and often unpleasant visitor.

Reality check: The last team to start a season ranked after a having record as bad or worse than the Cornhuskers was Alabama in 2001. The Tide was 25th after going 3-8 in 2000 and finished 7-5.

Reality check: After two straight nine-win season, the Cardinal have to prove they can get back the physical formula that helped them win at least 11 games five times from 2010-15.