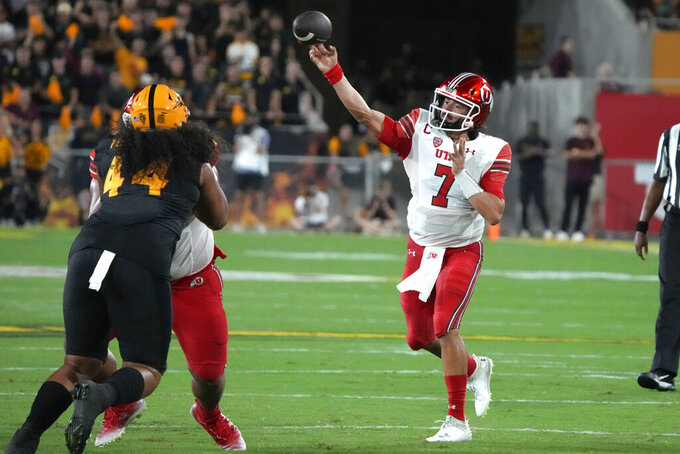 TEMPE, Ariz. (AP) — The Utah Utes have a veteran coach nearing two decades in charge of the program, a seasoned quarterback with a few years in the team's system, multiple offensive playmakers and a stout defense that doesn't give up many big plays.

Arizona State doesn't really have any of those things.

That made the results on Saturday night predictable.

Cameron Rising threw for 260 yards and two touchdowns to tight end Dalton Kincaid, and No. 13 Utah rolled past Arizona State 34-13 in the Pac-12 opener for both teams.

“That's just No. 86 having enough to make a catch,” Rising said of Kincaid's big night. “He's a guy who is just a playmaker. Any time you can put it in his vicinity, he's going to come down with it more times than not.”

The Utes spoiled the debut of Arizona State's Shaun Aguano, who was named interim coach earlier this week after Herm Edwards was fired following last weekend's loss to Eastern Michigan.

The Utes built a 17-0 lead by midway through the second quarter and led 24-6 at halftime. Utah outgained Arizona State 252-59 in the first half.

Rising completed 19 of 29 passes and the Utes finished with 465 total yards.

Arizona State's Emory Jones was 21 of 36 passing for 261 yards, one touchdown and two interceptions. Utah's defense sacked Jones five times and the Sun Devils didn't score a touchdown until the final minutes when the outcome was already decided.

“If I don't make adjustments, shame on me,” Aguano said. “These kids need to get the best of us as a coaching staff.”

It's been a week of upheaval for the Arizona State program, which fired Edwards on Sunday, one day after an embarrassing 30-21 loss to Eastern Michigan. The program is also in the midst of an NCAA investigation that involves recruiting violations.

Aguano — formerly the running backs coach — was named the interim coach. He was born and raised in Kapaa, Hawaii, but eventually became one of the most decorated high school coaches in Arizona history, leading Chandler High to four state 6A titles.

The one negative for the Utes was a potentially serious injury for starting tight end Brant Kuithe. He left with a leg injury in the first quarter and returned to the sidelines on crutches.

Utah starting running back Tavion Thomas didn't play in the first half, but entered the game in the third quarter and ran 11 times for 60 yards. Whittingham hinted that Thomas' absence was some sort of punishment.

“Sometimes things happen, and you've got to make certain moves,” Whittingham said. “It's an internal thing, but Tavion is healthy and fine.”

Thomas had his 11-game touchdown streak snapped. The last time he didn't score a touchdown was against Washington State on Sept. 25 last season.

The Utes could move up a few spots in the AP Top 25 after No. 6 Oklahoma and No. 10 Arkansas both lost.

Utah: It was a vintage game for the Utes, who have two excellent tight ends, a veteran quarterback and a deep running back group. The defense — led by safety Cole Bishop — has been outstanding. There's a reason they're among the favorites in the Pac-12.

Arizona State: Aguano got the interim job at a tough time. His first game was against Utah and his next two are against USC and Washington. The Sun Devils have some talented players but Pac-12 play figures to be difficult.