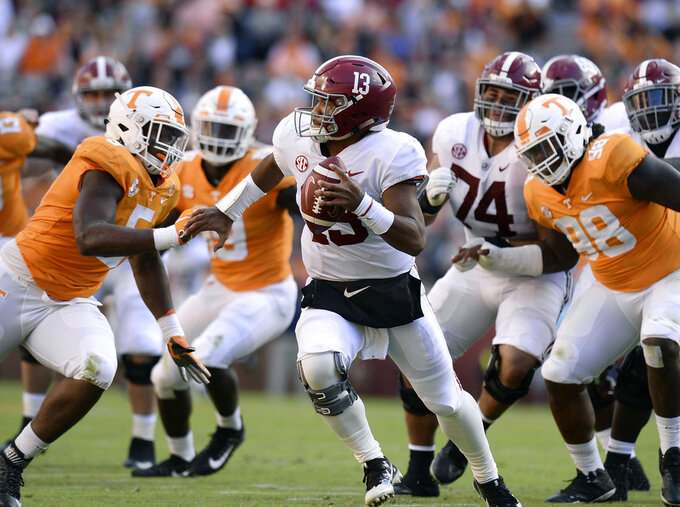 —Tua Tagovailoa, Alabama, threw for 306 yards and had TD passes to four receivers in little over a half, leading the top-ranked Crimson Tide to a 58-21 victory over Tennessee.

—Johnny Ford, South Florida, rushed for 164 yards and three TDs to help the Bulls remain unbeaten with a 38-30 victory over Connecticut.

—Tyler Huntley, Utah, threw for 341 yards and four TDs to lead the Utes to a 41-28 victory over Southern Cal

—Patrick Laird, California, ran for 193 yards and two TDs, and also caught a scoring pass in the Bears' 49-7 victory at Oregon State.

—Lawson Page, Morehead State, passed for a season-high 352 yards and accounted for three TDs in a 31-24 win over Valparaiso.

D.J. Knox rushed for 128 yards and three touchdowns, David Blough threw for three more scores and Purdue shook up the College Football Playoff chase with a 49-20 blowout of No. 2 Ohio State.

The Boilermakers won their fourth straight overall, their second in a row over a ranked team and pulled off their biggest upset since taking down then-No. 2 Ohio State 28-23 on Oct. 6, 1984. Purdue also set a school record for points scored against the Buckeyes, besting the previous mark of 41 in 1967.

Mistake-prone Ohio State had its 12-game winning streak snapped, fell out of the Big Ten East lead behind rival Michigan and now must fight away its way back into playoff position.

Michigan had plenty of reasons to be motivated to beat Michigan State, barely defeating its in-state rival over the last decade and losing to every ranked team on the road for a dozen years.

The Wolverines, though, were even more fired up to win after a pregame spat with the Spartans.

Shea Patterson threw two touchdown passes and No. 6 Michigan earned a desperately needed 21-7 win over No. 24 Michigan State, snapping a streak of 17 consecutive losses to ranked teams on the road.

The Wolverines had lost eight of 10 against coach Mark Dantonio's Spartans and those setbacks have led to them not winning a Big Ten title since 2004.

The matchup is always highly charged and kicked up a notch well before kickoff, when Michigan State's team walked from one end zone to the other with their arms locked and made contact with Wolverines players stretching.

Alabama continued its season-long penchant for fast starts and quickly finished off Tennessee.

Alabama posted the highest point total by a visiting team in the history of Neyland Stadium, which opened in 1921. Alabama is scoring 54.1 points per game and entered the weekend leading all Football Bowl Subdivision teams in that category.

Earlham of Indiana set a Division III record for consecutive losses with 51 with a 64-20 loss to Franklin. Earlham broke the 38-year record set by Macalester College of Minnesota. Earlham (0-8) has a week off before hosting winless Defiance (0-7), losers of 10 straight, on Nov. 3. Earlham is far from the NCAA record held by Prairie View with 80 straight Division I-AA losses from 1989-98.