Big Ten West race will be a missed opportunity for some 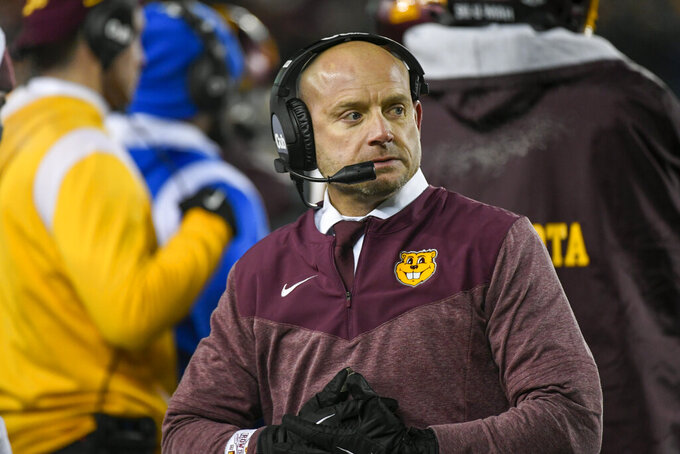 Minnesota head coach P.J. Fleck waits as referees review a play during an NCAA college football game against Iowa in the second half Saturday, Nov. 19, 2022, in Minneapolis. (AP Photo/Craig Lassig)

In his usual upbeat way, Minnesota coach P.J. Fleck tried to come to terms with how his team's Big Ten title chances slipped away.

Minnesota is now eliminated from contention for the conference championship game. The race to represent the Big Ten West is down to Iowa and Purdue, with Illinois still having a slim chance as well. The Hawkeyes, who rank dead last in the league in both passing and rushing, can secure a spot in the title game with a win over Nebraska this week. If that happens, then Minnesota, Purdue and Illinois — three teams that have never reached that championship game in Indianapolis — will have missed a golden opportunity.

For Fleck's Golden Gophers, these disappointments are starting to add up. They went 11-2 in 2019 and tied for first in the division, but Wisconsin went to the championship game. Minnesota then finished one game behind Iowa last year.

“Everybody’s had a chance at the West. It’s not just us," Fleck said. “Every single team has had a chance to win the West at some point, outright and run away with it. That’s what makes the West so competitive. The parity is pretty close among every team in that division.”

Fleck is right about that parity — especially this season — but still, only four of the West's seven teams have been to the title game since it began in 2011. Iowa, Northwestern and Wisconsin went the past three seasons, and Nebraska made it back when the league was divided into the Leaders and Legends Divisions.

In this respect, the West is no different than the East, which is thought to be more top heavy. Ohio State, Michigan, Michigan State and Penn State are the four teams from the East that have made it to Indianapolis.

The conditions seemed promising for some new blood from the West this year. Nebraska's program is in a rut, and Wisconsin was having enough problems that coach Paul Chryst was fired in early October. Iowa's offense was and still is a target of derision — but if the Hawkeyes win Friday, they'll play for the championship against the winner of the Michigan-Ohio State game. Just like last year.

“It’s our culture, man,” quarterback Spencer Petras said after Iowa beat Minnesota 13-10 for its fourth straight victory. “It starts with our head coach, his leadership. I can’t say enough about our leaders on defense. That Ohio State game we put them in a lot of rough spots and it would be easy for a unit to kind of turn on the offense, right? But they didn’t.”

After losing to Ohio State 54-10, the Hawkeyes beat Northwestern, Purdue, Wisconsin and Minnesota to reach this point.

If Iowa loses to Nebraska, Purdue can reach the title game with a victory over rival Indiana on Saturday. Iowa plays Friday, although Boilermakers coach Jeff Brohm is trying not to put too much attention on that, at least publicly.

“I know it’s Friday. I don’t know what time the game is. I’m sure as we’re traveling it’ll pop on people’s phone, things like that,” he said. “But as you know, we have got a big one ahead of us in a rivalry game that means a lot, so we have to just focus on that.”

Illinois needs both Iowa and Purdue to lose. If that happens, the Illini can make it to Indianapolis by beating Northwestern. Illinois actually beat both Iowa and Minnesota, but a three-game losing streak has the Illini needing help.

This season has still been a big step forward for Illinois and coach Bret Bielema, but the path to the Big Ten title will only be tougher after Southern California and UCLA join the league.

For Minnesota, that path becomes harder even sooner than that. Next year, the Gophers' schedule includes crossover games against both Michigan and Ohio State from the East. So this season may have been the division title chance they needed to take advantage of.

“Disappointed, not discouraged. That’s how I would sum it up," Fleck said after the loss to Iowa. "You know, I was told a long time ago: Close gets you caught, almost gets you fired.”