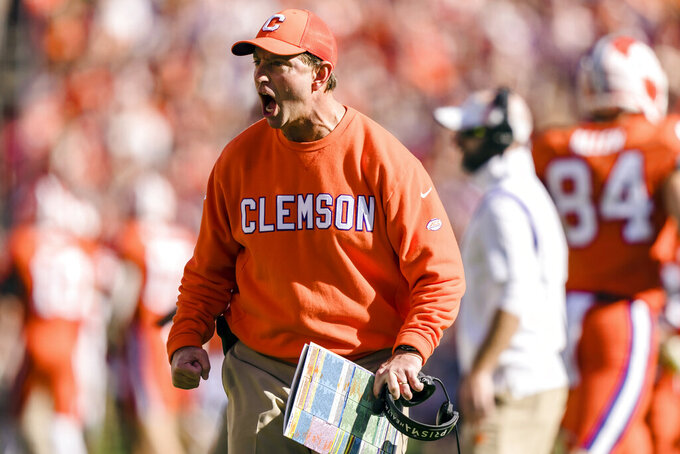 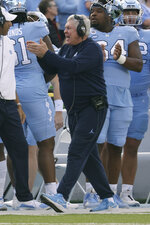 CHARLOTTE, N.C. (AP) — Its College Football Playoff hopes dashed following a devastating loss to in-state rival South Carolina, No. 10 Clemson is turning its attention to returning to its familiar perch atop of the Atlantic Coast Conference.

The Tigers (10-2, 8-0 ACC, No. 9 CFP) are seeking their seventh ACC title in the last eight seasons — after failing to reach the championship game last season for the first time since 2014, ending a remarkable six-year run of dominance.

“Obviously, disappointed with our regular-season finish, but I’m really proud of our team and our staff for winning the division,” Clemson coach Dabo Swinney said. “It’s really special to have that type of consistency.”

A win for North Carolina would be huge.

The winner of this game earns a bid to the Orange Bowl. The Tar Heels have not won the ACC since 1980, and a victory would go a long way toward continuing to build the program.

“Everybody in this league is trying to get to the standard that Clemson is," UNC coach Mack Brown said. "And that’s the gold standard, that’s what we want.”

This is the last year that the ACC will have a two-division format. The league will have all 14 football-playing members in a single race next year for spots in the title game.

“It’s cool for our team to be the last Coastal champion,” Brown said, “because it’ll never happen again.”

The division has long been known for its unpredictability, including having seven different winners in as many seasons from 2013-19. Pittsburgh, which beat Wake Forest for last year’s title, and UNC are the only teams to claim two division titles since.

Swinney was always a proponent of ACC divisions, but understands why more leagues are giving them up. He said TV wants to ensure the best two conference teams compete for the title. But once the College Football Playoff expands, Swinney thinks conference title games will take a back seat to the 12-team field.

Brown posted on social media that he had good relationship with Clemson running back Will Shipley’s grandmother, Patricia, when he was trying to land Shipley for the Tar Heels.

Shipley chuckled this week at the memories of his, Nini – that’s what they call her, Shipley said – getting texts from the UNC coach.

“I had to tell her, ‘Nini, you’ve got to chill out, you don’t know how this stuff works,’” Shipley said. “But yeah, they definitely did get close to her in recruiting.”

Despite the recent bumps in the road, Maye leads the Bowl Subdivision in total offense (373 yards per game) and is tied for fourth with 35 touchdown passes, just two behind national leaders C.J. Stroud of Ohio State and Clayton Tune of Houston.

He has also thrown just five interceptions on 440 attempts despite playing in an aggressive offense that pushes the ball downfield.

“Offensively, they are the best we’ve seen, by far,” Swinney said. “Their quarterback is a great, great football player.”

North Carolina has needed the big numbers generated by its offense to offset defensive struggles.

In ACC play, UNC is giving up 416.4 yards and, more importantly, 25.8 points per game –- the latter figure ranking near the middle of the league.

“We’re starting to play and our habits that we’ve created are starting to carry over, and we’ve seen those habits in the games,” said defensive coordinator Gene Chizik, who was UNC’s coordinator during its last title-game appearance in 2015. “So I’m proud of them, we’ve definitely improved.”

The Tigers will be sticking with QB DJ Uiagalelei on Saturday night despite his recent struggles.

Clemson won’t have its most reliable receiver in Beaux Collins. who'll need surgery on his right shoulder and will miss the remainder of the season.

Collins, who had a team-high five TD catches, returned last week after missing two games and caught a 59-yard pass in a 31-30 loss to South Carolina that was Clemson’s longest completion this season. Collins re-injured the shoulder against the Gamecocks.

Swinney said Collins was always going to have an operation to fix things, but felt he could tough it out in Clemson’s last few games.

“Appreciate him doing that,” he said.