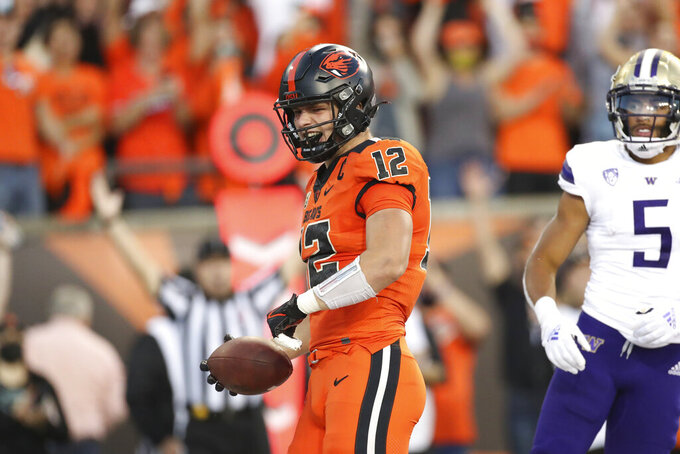 Oregon State inside linebacker Jack Colletto (12) celebrates after scoring a touchdown during the first half of an NCAA college football game against Washington on Saturday, Oct. 2, 2021, in Corvallis, Ore. (AP Photo/Amanda Loman)

It’s still relatively early in the season, but Oregon State’s win combined with Stanford’s upset of No. 3 Oregon in overtime puts the Beavers (4-1, 2-0 Pac-12) in first place in the Pac-12 North.

Who saw this coming from a team that hasn’t been to a bowl game since 2013?

“We’re not going to get happy with where we are now,” Oregon State safety Alton Julian said. “I knew this was going to happen. We’ve just got to keep going.”

Oregon State rallied for its fourth consecutive win after losing the lead in the fourth quarter.

Back came the Beavers.

Washington quarterback Dylan Morris was stopped inches short of a first down on a fourth-and-1 direct snap run near midfield at the 3:18 mark. The spot was upheld on an official’s review.

“Unfortunately the spot, they marked us short,” Washington coach Jimmy Lake said. “But we’re going for that every single time.”

Oregon State went back to its strong running game to set up Hayes’ game-winning field goal.

“College football’s a long game and it’s gonna go back and forth and obviously this game played out exactly like that,” Oregon State coach Jonathan Smith said. “I couldn’t be more proud of the way we continued to fight.”

McGrew’s 39-yard touchdown run up the middle tied the game at 17-17 with 10:19 remaining. Morris’ 18-yard pass to Kamari Pleasant on third and 18 deep in Huskies territory kept the drive alive.

Washington had 318 total yards to 290 for the Beavers, and limited Oregon State quarterback Chance Nolan to just 48 yards passing. The Huskies were on the verge of their third straight win, but were unable to finish.

“It’s obviously frustrating because you see the spurts of greatness,” said McGrew, who ran for 104 yards and two touchdowns. “If we just keep executing and doing what we know how to do, I don’t think anybody can stop us.”

The Beavers took their first lead at 14-7 on Baylor’s 5-yard touchdown around right end midway through the second quarter.

Washington’s Peyton Henry converted a 20-yard field goal on the final play of the first half and the Beavers led 14-10 at the break.

Washington took the opening kickoff and marched 75 yards for the score, culminated by a 44-yard pass to a wide-open Terrell Bynum, who was not touched on his way to the end zone.

Washington: Redshirt freshman quarterback Dylan Morris, who went into the game leading the Pac-12 in passing yards, continues to show promise. He completed 17 of 26 for 142 yards with a touchdown and interception, and was 4-for-4 for 70 yards and a score on the game’s opening drive.

The Huskies have allowed just two passing touchdowns this season.

Oregon State: Chance Nolan, who came into the game ranked fourth nationally in passing efficiency, struggled to find passing lanes against the Huskies. He completed just 7 of 15 for 48 yards and an interception, and lost a fumble on a sack.

But OSU’s running game, which amassed 322 yards against USC, accounted for 242 yards and all three Beaver touchdowns and was a major factor in the win.

Oregon State backup linebacker Jack Colletto has become an offensive weapon. A former quarterback for the Beavers, Colletto is often called on in short-yardage situations to take direct snaps. He scored his fourth rushing touchdown of the season against Washington.

In the Beavers’ previous game at USC, Colletto became the first FBS player since 2004 with two rushing touchdowns and an interception in the same game as the Beavers won 45-27, their first victory at the Los Angeles Memorial Coliseum since 1960.

Washington: The Huskies have a bye next week and will host UCLA on Oct. 16.

Oregon State: The Beavers will be at Washington State next Saturday.