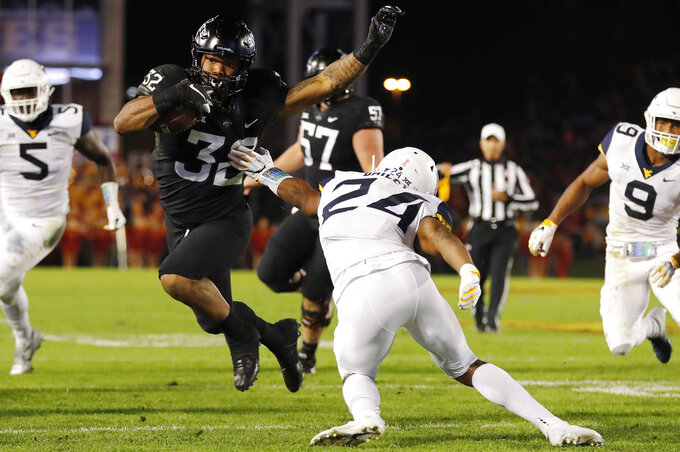 AMES, Iowa (AP) — It was arguably West Virginia's biggest test, on the road at night against a plucky Iowa State team with a stifling defense and a dangerous young quarterback.

David Montgomery had a career-high 189 yards rushing for the Cyclones (3-3, 2-2 Big 12), who capped a wild day by beating a Top 25 team for the fifth time in seven tries after dropping 20 in a row to ranked teams.

Iowa State held the Mountaineers to 152 yards overall and zero points in the second half.

Iowa State scored 20 straight points after spotting West Virginia an early touchdown off a turnover. Purdy, in his first career start, then found Deshaunte Jones through a pair of defenders on a sprawling 32-yard TD grab that put Iowa State ahead 28-14 with 12:17 to go.

The story of the game was Iowa State's defense, which dominated the high-flying Mountaineers. West Virginia was held 375 yards below its season average, Grier was sacked seven times and the Mountaineers were 1 for 10 on third downs.

"I thought at times that we played a lot of complete football," Iowa State coach Matt Campbell said. "We continue to grow."

Fittingly, the Cyclones sealed the win by forcing a hold in the end zone for a team safety and a 30-14 edge with 5:14 left.

Will Grier had arguably his worst game as a Mountaineer, throwing for just 100 yards on 11 off 15 passing. West Virginia was outgained by 346 yards, a stunning figure for a team that hadn't even trailed in rolling up five straight wins.

West Virginia: The Mountaineers still control their destiny in the Big 12, with games against Texas and Oklahoma left on the schedule. But their playoff hopes are currently out of their hands. Still, it's early, and if West Virginia can regain the offensive form they showed through the early part of the season it'll be tough to beat. But this was a bad, bad loss. "It's just lack of execution. I don't know if it was a lack of effort, just lack of execution," running back Kennedy McKoy said.

Iowa State: The Cyclones have held all six of their opponents below their season average, which has been instrumental the team's bounce back from a 1-3 start. Can Iowa State grab the second spot in the Big 12 title game? Probably not — but the schedule will ease up considerably and these Cyclones seem capable of going on a run.

IT COULD HAVE BEEN WORSE. MUCH, MUCH WORSE FOR WEST VIRGINIA.

Iowa State appeared to catch a break when, up 20-7, an interception by Josh Norwood inside the West Virginia 5 was overturned. That set up a Cyclones field goal try — which was blocked by Kenny Bigelow, Jr. and returned 72 yards for a touchdown by Derrek Pitts Jr. Those two plays likely produced a 10-point swing in favor of the Mountaineers, since kicker Connor Assalley hadn't missed a field goal all year. Pitts was carried off in the fourth quarter, unable to put weight on his left leg.

West Virginia's fate will rest on how many voters realize what kind of defense Iowa State has in 2018, and how well the Cyclones have played in big games over the past two years — especially at home.

Iowa State is off next week.