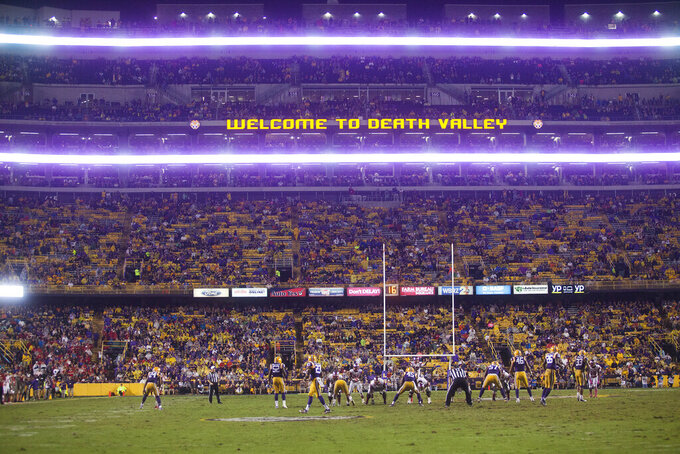 FILE - In this Oct. 24, 2015, file photo, Western Kentucky lines up on offense against LSU during an NCAA college football game at Tiger Stadium in Baton Rouge, La. LSU and Caesar's Sportsbook announced Friday, Sept. 17, 2021, that they have entered into a multi-year sponsorship agreement, making Louisiana's flagship state university the first in the Southeastern Conference to enter a financial partnership with a gambling company. (Austin Anthony/Daily News via AP, File)

NEW ORLEANS (AP) — LSU and Caesar's Sportsbook announced Friday that they have entered into a multi-year sponsorship agreement, making Louisiana's flagship state university the first in the Southeastern Conference to enter a financial partnership with a gambling company.

The value will “multiple millions” of dollars, a person familiar with the agreement said. The person spoke to The Associated Press on Thursday on condition of anonymity because the value of the contract has not been announced. The person also said there are no plans to place a sportsbook in Tiger Stadium or other LSU game venues included in the deal.

The deal also comes as national rules governing college sports have begin to allow college athletes to profit from their name, image and likeness (NIL) without jeopardizing their eligibility. It remains unclear with players older than 21 will be able to participate in any of Caesar's advertising campaigns at LSU or around the state.

As part of its deal with LSU, Caesars Sportsbook will receive naming rights for the new Caesars Sportsbook Skyline Club at Tiger Stadium, as well as signage throughout Death Valley beginning on Saturday, Sept. 18 for LSU’s home game against Central Michigan. Caesars also post additional signage at the Pete Maravich Assembly Center (basketball), Alex Box Stadium (baseball) and have a presence on LSU's mobile sports app.

“We share a clear vision of how athletics and entertainment can come together to enhance the fan experience," LSU Athletic Director Scott Woodward said. "We are excited to join with Caesars to make that vision a reality.”

Caesars has been steadily expanding its business operations in Louisiana and is set to undergo “large-scale” renovations transforming Harrah’s New Orleans to Caesars New Orleans, as well as Isle of Capri casino in Lake Charles, Louisiana, to Horseshoe Lake Charles.

In its announcement, Caesars said it is “committed to working with the Louisiana Association on Compulsive Gambling, regulators and the community to provide responsible gaming resources to all eligible sports bettors in the state.”

It also stated that it will not market to students or fans under the age of 21 or “highlight gaming offers inside campus facilities.”

Caesars also has committed to creating an annual scholarship fund to support LSU students from Louisiana.

“LSU athletics programs have always exemplified excellence, and at Caesars, we couldn’t be happier to partner with such an iconic brand in college athletics,” said Chris Holdren, Co-President of Caesars Digital. “We have a proud legacy in Louisiana, and bringing LSU fans and alumni closer to the sports they love while also offering scholarship opportunities will help us build upon that.”