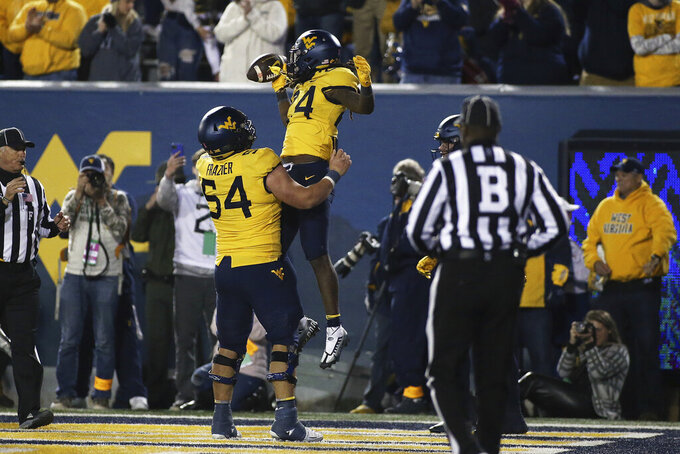 MORGANTOWN, W.Va. (AP) — Tony Mathis rushed for a career-high 163 yards and two touchdowns and Casey Legg kicked a 22-yard field goal with 33 seconds left to lift West Virginia to a 43-40 victory over Baylor on Thursday night.

Mathis came up big in the absence of West Virginia's leading rusher, CJ Donaldson, who was ruled out of the game after entering the concussion protocol during a loss at Texas on Oct. 1.

Mathis said he put no extra pressure on himself to perform in Donaldson’s absence.

"I just went through the same routine I do every week and just bought into it with what the coaches were telling me,” Mathis said.

Mathis scored on a 34-yard run with 7:05 left and set up the winning field goal with a 37-yard run to the Baylor 8. He surpassed his previous best of 118 yards against Kansas last year.

“He was decisive,” West Virginia coach Neal Brown said. “And that’s where he hasn’t been this year.”

Baylor had one last chance starting from its 23-yard line. But backup quarterback Kyron Drones threw two incompletions and was tackled near midfield on a scramble as time ran out.

The Bears lost starting quarterback Blake Shapen in the third quarter when he slid at the end of a scramble and took a helmet-to-helmet hit from West Virginia’s Andrew Wilson-Lamp. Wilson-Lamp was flagged for targeting. The call was upheld upon review and Wilson-Lamp was ejected. Shapen left the field, went to a medical tent to be evaluated and did not return.

Baylor coach Dave Aranda said Shapen and injured running back Craig Williams will get examined on Friday "and we should have an idea after that.”

Shapen completed 14 of 22 passes for 326 yards and two touchdowns.

Drones replaced Shapen and led Baylor on two touchdown drives. After Qualan Jones scored on a 2-yard run with 13:39 remaining, West Virginia’s Dante Stills blocked the extra-point kick, teammate Jacolby Spells picked up the loose ball and ran the length of the field to give the Mountaineers two points. Baylor still led at that point 37-33.

Legg is a perfect 8 of 8 on field goal tries this season.

BACK FROM THE BRINK

Brown has heard plenty of speculation about how his team is in a lull this season. But after starting 0-2, West Virginia has won three of its last four.

“I’m proud of our group,” he said. "We overcame adversity. I think ‘the demise’ is kind of getting ahead of itself.”

Baylor's Gavin Holmes set career highs with seven catches for 210 yards. West Virginia's Kaden Prather had eight catches for the second straight game and set a career high with 109 yards. Both had a TD catch.

Baylor has scored 13 touchdowns on offense this season from at least 25 yards out, and they got two of those in the first half Thursday night.

Baylor: The Bears now find themselves in the middle of the league standings with half of the season still remaining.

West Virginia: The Mountaineers improved to 6-0 at home against Baylor and got a much-needed win because they could be underdogs in every remaining game in a bid to become bowl eligible.

“For us, I hope this really sets us up for a stretch run,” Brown said.