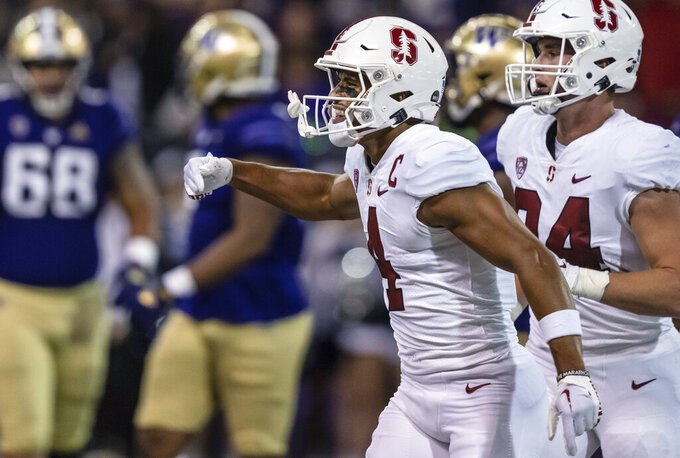 Stanford wide receiver Michael Wilson celebrates after scoring a touchdown during the first half of the team's NCAA college football game against Washington, Saturday, Sept. 24, 2022, in Seattle. (AP Photo/Stephen Brashear)

Line: Oregon by 17, according to FanDuel Sportsbook.

Oregon came from behind last weekend to beat Washington State 44-41. It was the Ducks' third-straight win following a season-opening loss to Georgia. Oregon has a 21-game winning streak at Autzen Stadium, the third longest home winning streak in the FBS. It is Stanford's third straight game against a team ranked within the top 20: Then-No. 10 USC, then-No. 18 Washington and now Oregon. The Cardinal lost the first two: Both the Trojans and the Huskies scored more than 40 points on Stanford.

Stanford quarterback Tanner McKee against Oregon's pass defense. Oregon has allowed opponents an average of 301.5 passing yards a game (125th in FBS) and they've allowed nine total touchdowns. McKee has thrown for 814 yards and six touchdowns this season, including 286 yards and three TDs against Washington. McKee ranks fifth in the Pac-12 with an average of 271.3 passing yards a game, but he's thrown four total interceptions.

Stanford: Running back Casey Filkins, who made his first career start last weekend against Washington and rushed for a career-high 100 yards. Filkins stepped into a starting role because of an unspecified injury to E.J. Smith. Stanford coach David Shaw announced this week that Smith will miss the rest of the season.

Oregon: Receiver Troy Franklin is averaging 101.7 yards over the last three games. Overall, he's ranked fifth in the Pac-12 with an average of 84.8 yards a game. He's got two catches for touchdowns — including a 50-yard score that put Oregon ahead against Washington State last weekend. He finished with a career-high 137 receiving yards against the Cougars.

Oregon is the only team in FBS that has not allowed a quarterback sack this season. ... Stanford upset then-No. 3 Oregon 31-24 in overtime last season. ... Ducks QB Bo Nix threw for a career-high 428 yards against Washington State. ... Oregon's offense is averaging 51.7 points a game since the season-opening loss to Georgia. ... The Ducks have converted on nine of 10 fourth-down attempts. ... Stanford receiver Michael Wilson caught six catches for a career-best 176 yards and two touchdowns in the loss to the Huskies last weekend.