No. 17 Illinois puts 5-game win streak on line vs Huskers 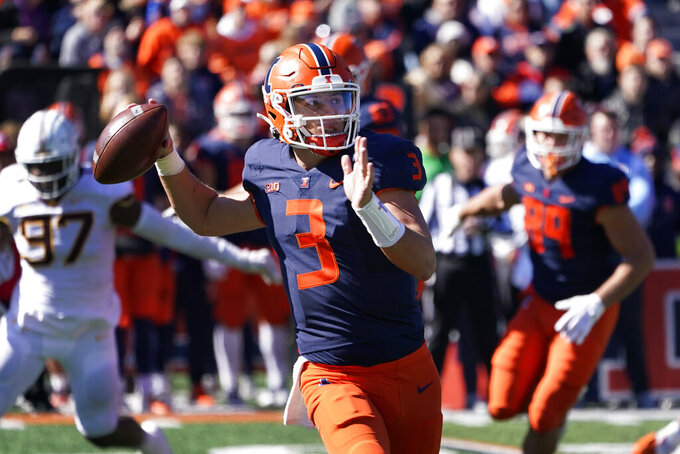 Line: Illinois by 7 1/2, according to FanDuel Sportsbook.

The Illini remain alone in first place in the Big Ten West with a win and falls in a three-way tie with Nebraska and Purdue with a loss. They've won five straight games and six of their first seven for the first time since the 2001 Sugar Bowl team. Nebraska is looking to go 3-2 under interim head coach Mickey Joseph and head into November in contention for the division title.

Illinois secondary vs. Nebraska QB Casey Thompson. The Illini lead the nation in pass efficiency defense, having intercepted 12 passes and allowed only two touchdowns through the air. Thompson's interception rate of 3.83% (8 on 209 attempts) is worse among Big Ten quarterbacks who have started every game, and the 19 sacks he's taken is third most in the league.

Nebraska: WR Trey Palmer is fourth in the nation with 111.6 receiving yards per game after setting a school record with 237 against Purdue on Oct. 15. His speed will challenge Illinois' DBs.

Nebraska LB Nick Henrich, who has started the past four games, is out for the season with a knee injury. He was tied for fifth on the team in tackles despite missing two games. ... Illinois has won four straight against West opponents for the first time since the Big Ten went to the current divisions in 2014. ... Nebraska has lost 19 straight to Top 25 opponents since beating Oregon in 2016. ... Illinois is outscoring opponents 77-17 in second halves. ... Bret Bielema's 11-8 start as Illinois' coach is the best since John Mackovic was 12-6-1 over the 1988-89 seasons.