No. 18 Utah State tries to stay on top in Mountain Division 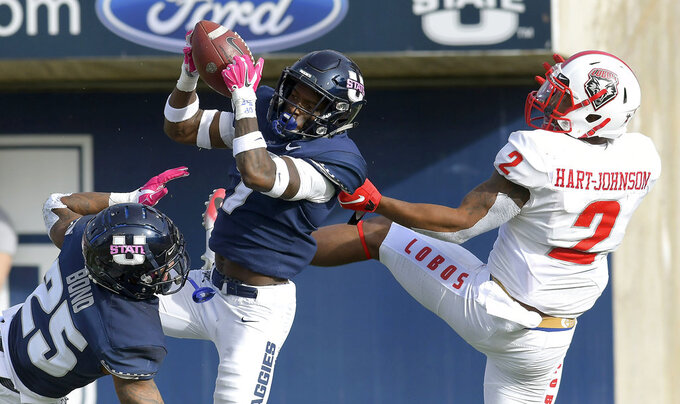 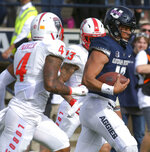 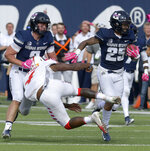 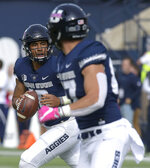 The reappearance in the rankings was a nice little reward for No. 18 Utah State this week. After all, it's been six years since the team last surfaced in the poll.

Now, the novelty is wearing thin for coach Matt Wells, who's grown weary of the constant congratulations and pats on the back.

He's more than ready to get the focus back on football, with the Aggies (7-1, 4-0 Mountain West) trying to stay on top in the Mountain Division. They have a chance to move to 8-1 for the first time since 1963 when they travel to Hawaii (6-4, 3-2) on Saturday night.

"The bottom line is this: We don't go through the offseason in January and February and break every team huddle and say, 'Top 25 ranking on three — one, two three!'" Wells said. "Yeah, it's nice. It's recognition. But I want to be ranked there at the end of the year."

Utah State faces a Rainbow Warriors team that started out torrid, but has fallen on tough times with three straight losses.

"It's always tough to win over there, because there are a ton of distractions," Wells said of the long trek to Honolulu. "This is a team in Hawaii that, man, what a really good quarterback."

That would be in reference to Cole McDonald, who's thrown 30 TD passes this season. The sophomore with the dreadlocks has been a big reason why Hawaii has been a surprise after being picked to finish second-to-last in the West Division. If the Rainbow Warriors win Saturday, they secure a winning regular-season mark for the first time since 2010.

"We have to work really hard in order to get what we want accomplished," Hawaii offensive lineman J.R. Hensley said. "Take the task at hand and get going this week."

The Aggies are led by quarterback Jordan Love, who earned the league's player of the week honors after throwing for a career-best 448 yards and four TDs against New Mexico.

"He could be the best quarterback in the conference. He's really smooth," Hawaii coach Nick Rolovich said. "I'm really impressed with the kid."

Things to know in a series that Utah State leads 9-6:

EIGHT IS ENOUGH: The Aggies are tied with Temple for the most non-offensive touchdowns this season with eight. They have four on special teams and four more by the defense. Last week against New Mexico, safety Shaq Bond had a 100-yard interception return for a score. In addition, returner Savon Scarver has returned two kickoffs for TDs, one that went 100 yards and another for 99. "Almost every single game we're getting one," Wells said. "That usually creates momentum and our offense has fed off of it."

SEVENTH HEAVEN: A little information on the seven-game winning streak by the Aggies: On offense, they're averaging 52 points and 489 total yards. The defense has limited teams to 20 points and forced 19 turnovers. For that, the defense credits facing Love and the explosive offense each day in practice. "Preparing against Jordan a lot helps us on Saturdays," senior safety Jontrell Rocquemore said.

FIRST & GOAL: The Aggies are a perfect 8-for-8 in grabbing a lead at the end of the first quarter this season. They've outscored teams by a 110-29 margin in the opening 15 minutes. For added measure, they hold a 238-72 lead in the first half.

JOHNNY BE GOOD: Junior receiver John Ursua has 14 receiving TDs for the Rainbow Warriors this season. The native of Hawaii ranks second in the nation with 1,083 yards receiving as he forms quite a combination with McDonald. Ursua was looked at by Utah State. He served a two-year mission in Paris. "Besides the quarterback, he's what makes it go," Wells said. "He's dynamic ... He's a great player."