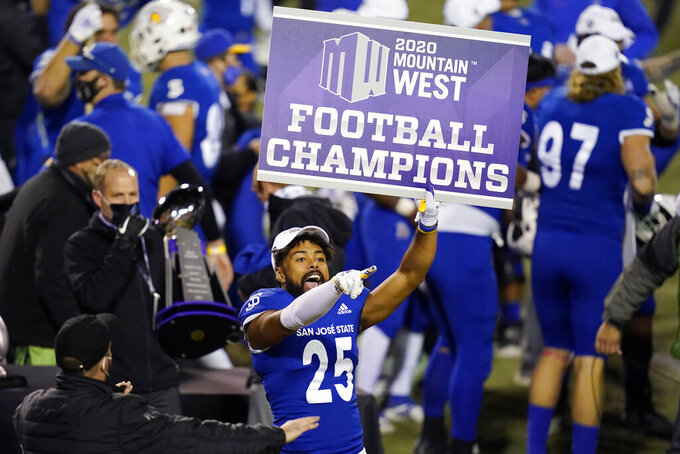 “You just call on me brother when you need a hand. We all need somebody to lean on.”

After beating Boise State 34-20 for their first Mountain West Conference championship, the No. 25 Spartans celebrated by swaying back and forth with arms connected at the elbow and belting out Bill Withers’ 1972 hit “Lean on Me.”

“That celebration was everything,” said Nick Starkel, who completed 32 of 52 passes for 453 yards and three touchdowns. “It’s the culmination of this whole season. We sang in that locker room together cause that how this team plays. We lean on each other.”

It falls in line for a program that hadn’t enjoyed a winning season since 2012 and adopted the mantra “Climb the Mountain” prior to this season.

The Spartans (7-0), who had lost all 14 previous meetings with the Broncos (5-2), now prepare for their 11th bowl appearance since 1946, and for the first time as an undefeated team.

Tre Walker and Derrick Deese Jr. each had seven receptions. Walker led all receivers with 137 yards.

“That gives me supreme confidence as a quarterback, knowing that whoever is in the game is gonna be able to go up and make a play,” Starkel said.

It was the fourth 400-yard passing game of Starkel’s career, and second this season, his first with the Spartans. He spent the first three years of his college career at Texas A&M and Arkansas before transferring to San Jose State in January.

Boise State’s Hank Bachmeier completed 20 of 40 pass attempts for 221 yards but couldn’t get balance from a rushing game that was held to a paltry 12 yards on 24 rushes by a suffocating San Jose State defensive front.

The Spartans set the tone by scoring on five of their seven first-half drives, while their defense held the Broncos to a pair of field goals in the first two quarters.

Boise State, which got inside San Jose State’s red zone just one time, was held to 233 yards on offense, 36.7% less than the 368.3 it averaged during the regular season.

It was just the third time this season the Broncos were held to 20 points or less.

“I thought our defense was lights out,” Brennan said. “I can’t get over our defense.”

Spartans kicker Matt Mecurio set a career high with four field goals — all in the second quarter. Mecurio tied an NCAA record and became the fifth player to kick four field goals in one quarter.

“This is why we play college football,” Starkel said. “To be playing meaningful games at the ends of seasons. That means championships, that mean’s bowl games and maybe one day a college football playoff.”

Cade Hall had two sacks and three tackles for loss. He has 10 sacks in seven games, marking the first time a Spartan registered 10 sacks in a season since 2012, when Travis Johnson had 13 in 13 games.

Deese’s fourth quarter touchdown was his fifth of the season. All five of his touchdown catches came on third down.

San Jose State could move up with No. 23 Buffalo losing to Ball State on Friday night in the Mid-American Conference championship. N.C. State is No. 24.