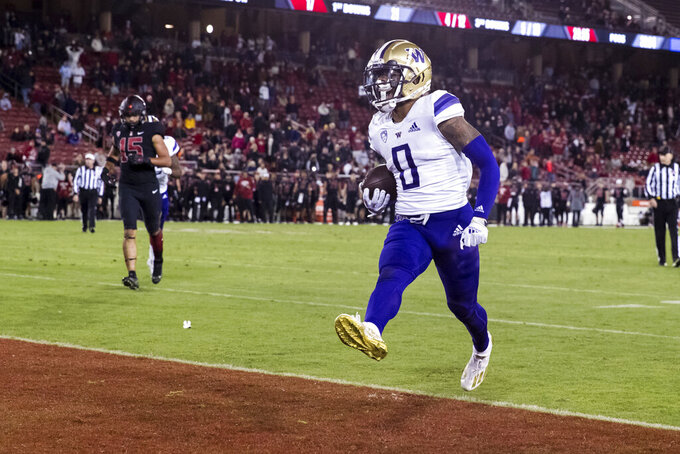 Line: Oregon by 6½, according to FanDuel Sportsbook.

Oregon begins its challenging final month of the regular season with a trip to face its most heated rival. The Ducks face both Washington schools before a trip to Pac-12 South leader Utah and finally a showdown at home with rival Oregon State. Washington has won two straight in ugly fashion to stay in the Pac-12 North hunt and keep its bowl hopes alive. Last year’s game never happened after COVID-19 issues within the Huskies program that landed Oregon in the Pac-12 title game. That fact didn’t sit well with Washington, but the Huskies have far bigger issues, specifically on offense, if they intend on challenging the Ducks.

Oregon: WRs Jaylon Redd and Mycah Pittman. The Ducks will be without top wide receiver Johnny Johnson III for the first half due to a targeting penalty. Redd has three career TDs vs. the Huskies including two in the 2019 game, while Pittman had a career-high five catches two weeks ago.

Washington: Morris. It’s been such a strange season for Morris. It started with optimism and quickly devolved into debates about whether he should be benched in favor of freshman Sam Huard. Morris did make the big TD throw late to McMillian against Stanford and can definitely change the opinion of fans with a win over the Ducks.

Last year was the second time since 1945 that Washington and Oregon didn’t play. The teams did not meet in 2001 due to a scheduling quirk. ... Washington leads the Pac-12 in several defensive categories including third-down percentage defense, first downs allowed, passing defense and scoring defense. ... Oregon has won six of the past seven in Seattle, and 14 of the past 16 overall.