No. 7 TCU at struggling WVU after 4 wins vs. ranked foes 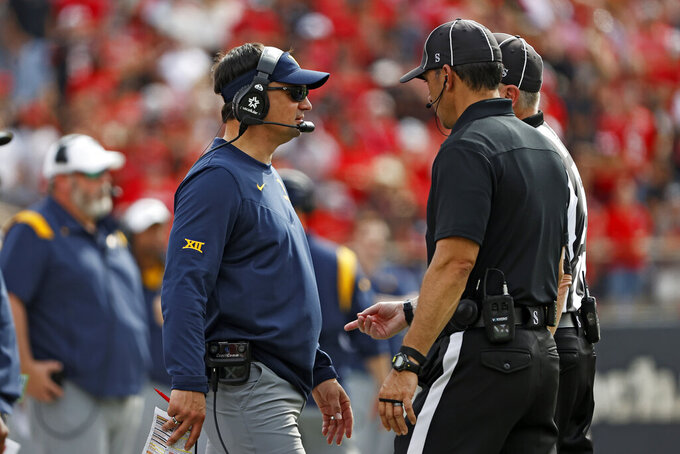 West Virginia coach Neal Brown talks to the officials after a penalty during the first half of an NCAA college football game against Texas Tech, Saturday, Oct. 22, 2022, in Lubbock, Texas. (AP Photo/Brad Tollefson)

MORGANTOWN, W.Va. (AP) — The challenge this week for Max Duggan and No. 7 TCU is to find the same motivation and passion to play on the road at stumbling West Virginia as the Horned Frogs did against ranked opponents in their four previous games.

The Mountaineers (3-4, 1-3 Big 12) don't exactly conjure up fear in opponents these days, especially coming off a lopsided loss at Texas Tech. But West Virginia does have a bit of history on its side and will go for its fifth straight win over TCU (7-0, 4-0) on Saturday.

It's hard to find anyone in the TCU locker room looking past the Mountaineers.

"I feel like every week’s a challenge. Not fearing an opponent, but we’ve got to respect them," TCU safety Mandi Obiazor said. “Every week, give them our best and (be) confident in what we can do.”

Two schools that entered the Big 12 together in 2012 are heading in the opposite direction.

TCU is one of six unbeaten teams left in the Bowl Subdivision. The Horned Frogs have wins over Oklahoma, Kansas, No. 9 Oklahoma State and No. 22 Kansas State and are seeking a berth in the Big 12 championship game for the first time since 2017. But they have a few more challenges to overcome: Three of their final five games are on the road.

“It's been fun with this group because we've never talked about really our opponent that much,” said TCU first-year coach Sonny Dykes, who will make his first trip to Morgantown. “I think that's been the one thing that we've talked about is just we need to focus on ourselves and preparing well and playing well and doing the things that it takes to get ourselves ready to give our best effort on a Saturday.”

West Virginia coach Neal Brown is 20-22 in four years and under pressure by the fan base to produce. Last week's 48-10 loss at Texas Tech only riled up the supporters more. It also has Brown doubling down on his commitment to get better.

TCU rallied from 18 points down last week against Kansas State and from 17 points behind two weeks ago against Oklahoma State. According to TCU's athletic department, Tennessee in 2016 is the last team to overcome deficits of at least 17 points in consecutive games to beat ranked opponents.

“On all three of those plays, we got the look we wanted. We just didn't finish it,” said West Virginia offensive coordinator Graham Harrell. “Between JT and the receivers, we've got to find ways to make those plays when we've got a favorable look and what we think should be a favorable matchup.”

MILLER ON THE MOVE

Name the top running backs in the Big 12 and two come to mind: Bijan Robinson at Texas and Deuce Vaughn at Kansas State. Creeping up on them is TCU’s Kendre Miller, the only other back who is averaging over 100 rushing yards. Miller has 10 rushing touchdowns, including at least one in every game.

After a slow start to the season, Miller is coming off a season-high 153 yards against Kansas State.

West Virginia's leading rusher, Tony Mathis, will miss Saturday's game and backup Justin Jefferson is day-to-day. Brown said he expects redshirt freshman Jaylen Anderson to get some work. Anderson's only carries this season came against Towson, when he had 33 yards on six carries. Freshman CJ Donaldson returned last week from concussion protocol but was limited to 33 yards on 12 carries.

Brown and Dykes have crossed paths before. Brown was a wide receiver at Kentucky in the late 1990s when Dykes was an assistant for the Wildcats under Hal Mumme.