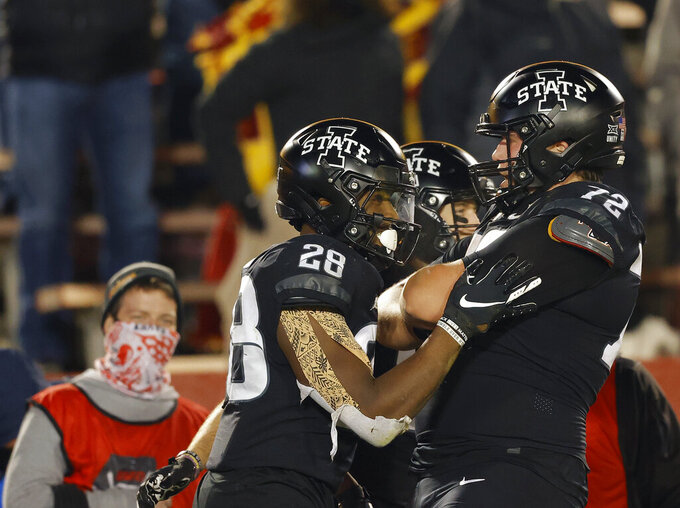 Iowa State, which has a five-game winning streak, plays in a conference championship game for the first time in school history. The Sooners are trying to win the Big 12 title game for the fourth year in a row, and get their sixth conference championship in a row overall. They have a six-game winning streak since a 37-30 loss at Iowa State on Oct. 3, when they were 0-2 in the Big 12 for the first time since 1998.

Iowa State RB Breece Hall vs. Oklahoma's defense. Hall leads the Big 12 with 1,357 yards rushing and 17 touchdowns, with eight 100-yard games and a touchdown in every game. The sophomore back ran for 139 yards and two TDs against the Sooners earlier this season. Oklahoma has given up only 198 rushing yards total its last three games, and leads the Big 12 allowing only 88.1 per game.

Iowa State: Junior LB Mike Rose averages 8.1 tackles per game, has 10 tackles for losses and is tied for the Big 12 lead with four interceptions. He had 11 tackles against Oklahoma in October.

Oklahoma: Redshirt freshman QB Spencer Rattler is the Big 12's top passer at 279.1 yards per game. He has 24 TD passes and seven interceptions, with at least two TDs in all but one game this season. He threw for 300 yards and two TDs and a pick in the earlier game against Iowa State.

Oklahoma is playing in its 12th Big 12 title game, including all four since the game came back from a six-season hiatus. The Sooners are 10-1 in the title game. ... Iowa State has never played in a conference championship game. The Cyclones haven't won or shared a league title since 1912. ... The Sooners and Cyclones both rank in the top three in the Big 12 in total offense, scoring offense, total defense and scoring defense. ... Brock Purdy is the winningest QB in Iowa State history with a 22-10 record. He is 19-6 against the Big 12, and the school's only QB to beat every other conference team.