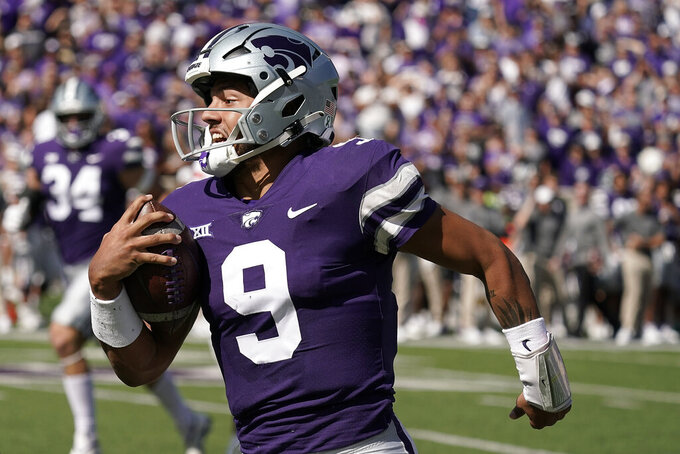 Some things to watch this weekend in the Big 12:

After winning three consecutive games against ranked opponents for the first time in school history, two of those in matchups of undefeated teams, the Horned Frogs (6-0, 3-0 Big 12) now play their conference co-leader. Kansas State (5-1, 3-0), coming off its open date after a 10-9 win over Iowa State, is the only other team without a conference loss. TCU beat Kansas before last week overcoming a late, two-touchdown deficit to beat No. 8 Oklahoma State in double overtime.

K-State has won the last three meetings in the series. TCU has the Big 12's top offense averaging 526.7 total yards and 45.3 points a game. Max Duggan has thrown for 265 yards a game with a league-leading 16 TDs passes and only one interception. The Wildcats are led by dual-threat quarterback Adrian Martinez (150 yards passing, 91 yards rushing per game) and dynamo running back Deuce Vaughn (110 yards rushing per game).

Spencer Sanders and the Oklahoma State offense against the Texas defense. Sanders insisted his right (throwing) shoulder was fine after not practicing before the double-overtime loss at TCU, and will be looking for a bounce-back performance. Sanders is still the Big 12 leader for total offense (324.7 yards per game), passing yards (273.2 yards) and his 21 total touchdowns (13 passing, eight rushing). The Longhorns (5-2, 3-1) are second in the league allowing 347 total yards a game and third giving up 18.3 points, with only one opponent scoring more than 21. The Cowboys (5-1, 2-1) have scored at least 34 points in every game.

Kansas State's Felix Anudike-Uzomah is tied for the national lead with 1.08 sacks a game (6 1/2 total), while Texas Tech's Tyree Wilson is second in the Big 12 with 1.0 a game (six total). ... Kansas has scored 39 touchdowns this season, already its most since 45 in 2009. ... Baylor has won its last 12 meetings over Kansas, and is 10-0 at home during the series. That includes 2002, when the Bears won 35-32 to end a 29-game conference losing streak that spanned five different seasons. ... After Oklahoma and Iowa State have open dates this weekend, only Kansas and Texas haven't had one.

West Virginia running backs Tony Mathis and C.J. Donaldson. Mathis ran for a career 163 yards and two touchdowns against Baylor last week when 240-pound true freshman and leading rusher C.J. Donaldson Jr. missed while in concussion protocol. Mathis, the fourth-year sophomore also had a 37-yard run to the Bears 8 to set up the game-winning field goal for the Mountaineers. Donaldson has already had three 100-yard games and was back at practice this week.

The way the schedule played out, it's already certain that there will be only one team without a Big 12 loss after this weekend, along with two one-loss teams and three two-loss teams. While TCU and K-State play for the outright Big 12 lead, the only teams currently with one loss (Texas and Oklahoma State) play each other. The other four teams playing go into this weekend with two Big 12 losses. So that will leave three teams with three losses, including Oklahoma (4-3, 1-3), which is idle along with Iowa State (3-4, 0-4).