No. 8 Trojans get Friday night tuneup vs Buffaloes 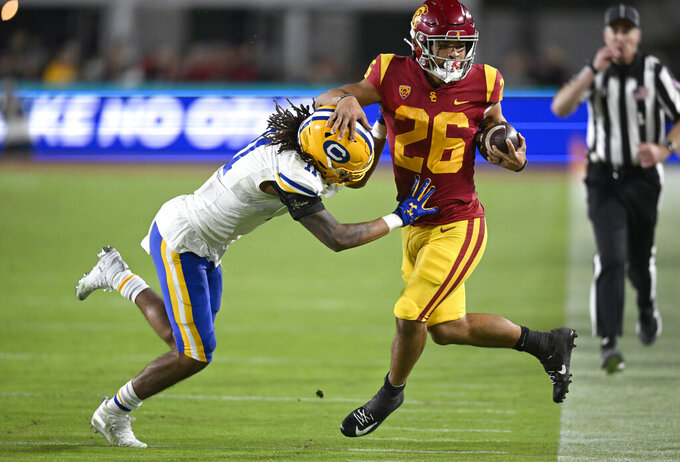 Despite having rivalry games against UCLA and Notre Dame on deck, in addition to potentially playing for the Pac-12 title, this is no time for the Trojans to look past the scuffling Buffaloes. With a defense that has allowed 38.3 points per game in its past three games, including nearly blowing a 20-point lead to California in a 41-35 win last week, USC must get on track before the closing stretch that determines just how successful Lincoln Riley’s first season in charge will be. Colorado might be happy to avoid the kind of thrashing it took in a 39-point loss to Oregon.

Buffaloes QB J.T. Shrout vs. the Trojans’ back seven. “USC against health” would also be an acceptable showdown, as the defense has not been the same since LB Eric Gentry sprained his ankle in the loss at Utah. Gentry’s range in coverage and long arms helped create interceptions, covering up issues with the pass defense. Without Gentry in the lineup, the Trojans have allowed 786 yards and six touchdown passes in their past two games. Slowing down Shrout, who has thrown for 675 yards with three touchdowns to five interceptions in three starts since freshman Owen McCown was hurt in the overtime win against the Golden Bears, is a must before facing Bruins standout Dorian Thompson-Robinson next week.

Colorado: WR Montana Lemonious-Craig is expected to make on a larger role after standout freshman Jordyn Tyson sustained a season-ending leg injury against the Ducks. Lemonious-Craig has 19 catches for 258 yards and two touchdowns this season, and the Inglewood, California, native will be a team captain for the game in front of friends and family.

USC: S Bryson Shaw made his first start against Cal, finishing with a team-leading 11 tackles. The Ohio State transfer was limited for much of the season because of a leg injury sustained during training camp before breaking out at Arizona with five tackles, one tackle for loss and one interception.

Trojans QB Caleb Williams has thrown 28 touchdown passes against one interception, the best ratio through nine games by an FBS player since 2004. Justin Fields (2019 at Ohio State) and Tua Tagovailoa (2018 at Alabama) each had 27 touchdown throws to one pick. ... Colorado has an FBS-worst six sacks, failing to bring down the quarterback in five of its nine games. ... USC WR Brenden Rice and CB Mekhi Blackmon have made an impact since transferring in from Colorado. Blackmon leads the Trojans with eight pass breakups, and Rice is fourth on the team with 23 receptions for 266 yards. ... Buffaloes S Trevor Woods ranks fourth in the Pac-12 with 77 tackles. Woods is expected to play after sustaining an injury against the Ducks. ... Despite missing the past two games because of an ankle injury, USC WR Jordan Addison is still tied for the conference lead in touchdown receptions. Utah TE Dalton Kincaid and Arizona WR Jacob Cowing and Tetairoa McMillan also have seven scoring grabs. ... Colorado is allowing an averaging of 201 yards rushing per game in Pac-12 play. ... The Trojans have put up at least 40 points in seven games this season, including five of seven conference contests. … Since becoming Pac-12 foes in 2011, USC has won by double digits in seven of 10 games against Colorado.