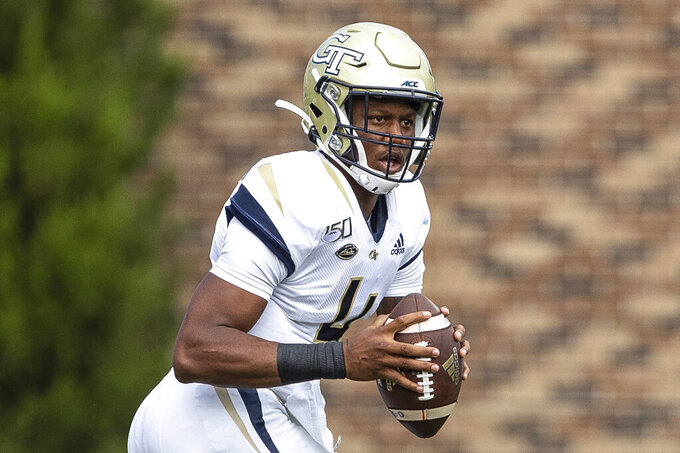 FILE - In this Oct. 12, 2019, file photo, Georgia Tech's James Graham looks to pass during an NCAA college football game against Duke, in Durham, N.C. Coach Geoff Collins started his rebuilding effort at Georgia Tech with a young team. The Yellow Jackets, who play Pittsburgh on Saturday, look even younger after losing three senior starters on offense to injuries and turning to freshman James Graham at quarterback. (AP Photo/Ben McKeown, File)

ATLANTA (AP) — Georgia Tech can have a say in the congested ACC Coastal Division race the next two weeks.

Pittsburgh (5-3, 2-2 Atlantic Coast Conference) visits the Yellow Jackets (2-5, 1-3) on Saturday. Georgia Tech plays at Virginia, one of the co-leaders in the division, next week.

The Panthers will try to rebound from a loss to Miami last week and stay close to the Coastal lead. They are one of four teams in the division with two conference losses. The loss to Miami snapped a four-game winning streak.

Pitt can gain bowl eligibility with a win.

The Yellow Jackets' optimism has been on the rise, even though they sit at the bottom of the Coastal, looking up at a pack of four teams with only two conference losses. First-year coach Geoff Collins team snapped a four-game losing streak by beating Miami two weeks ago.

Narduzzi said Georgia Tech's offense is difficult to predict under Collins, for the former Temple coach.

"We've gone back and watched all the Temple stuff, and very creative," Narduzzi said. "I think every week there's a new offense as far as what they try to do and try to create, so you kind of don't know what you're going to get offensively on Saturday."

Mason ran for 141 yards against Miami.

"His ability to see the hole and cut and just make dudes miss is unbelievable," Graham said.

Some other things to know about the Pittsburgh-Georgia Tech matchup:

Pitt outgained Miami 322-208 and still couldn't find a way to finish off the Hurricanes. A half-dozen dropped passes didn't help, including a pair on a last-gasp drive after the Hurricanes rallied to take the lead. Narduzzi, however, is confident the issue won't linger against the Yellow Jackets.

"It's like what do you do when a kicker is missing them," he said. "You love him up, you put your arm around him and try to get the best out of him. The big thing is you've got to let it go, and if you let it fester (it's dangerous)."

Graham is expecting the Pitt defense, which leads the nation with 38 sacks, to bring up defenders to stop the run. He said the Yellow Jackets will lean on their run-pass option plays. "I know teams are going to try to pack the box," Graham said. "That's fine. We can throw our RPO and still run it. ... I'm ready for anything they throw at me."

The Yellow Jackets rank last in the ACC with their average of 145.7 yards passing. Graham has started only three games and Mason says the Yellow Jackets soon will show more balance in their offense.

"Yeah, we got a different quarterback now," Mason said, adding "James can throw it. So, it's definitely going to up as soon as he gets to slinging the ball around."

For the first time since the Panthers joined the ACC in 2013, Pitt didn't have to dedicate a portion of each practice during training camp on how to slow down Georgia Tech's triple-option offense. In past years, the Panthers would spend 10-15 minutes a day on the Yellow Jackets during the summer so they wouldn't require a crash course the week of the game.

The Panthers were adamant about remaining optimistic about their chances to repeat as Coastal Division champions despite the last-minute loss to Miami. Narduzzi, however, would prefer his players stay focused on the task at hand.

"Maybe that's what they're thinking about, and they need to be thinking about Georgia Tech, not something like that," Narduzzi said. "It all leads to the same thing. We know what we want to do. You don't know what's going to happen in the crazy conference like the ACC or the Big Ten, and you've just got to keep playing, and you find out in five weeks."

By Michael Marot an hour ago
By Ralph D. Russo 5 hrs ago
By Tim Reynolds 6 hrs ago
By Eric Olson 10 hrs ago
By Travis Johnson 24 hrs ago