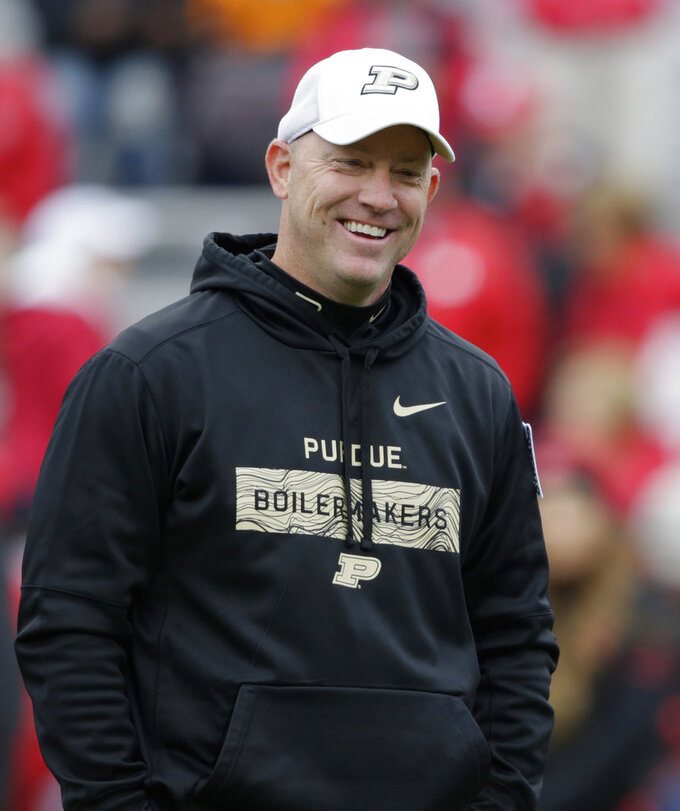 The winner plays another game this season while the loser starts offseason work — just like last year. Just like it seems every year.

"It's looking like every year, it's always going to come down to this game, unless someone is having an outstanding year," Brohm said Monday. "I know both teams are trying to get to that level."

Brohm is a relative newcomer to the series after growing up in Louisville, playing college football for the Cardinals and spending most of his coaching career in his home state, Kentucky.

He's a quick learner, though.

Now the Boilermakers (5-5, 4-4 Big Ten) try to do it again without some of those advantages.

Purdue has lost two straight and three of four, including last week's triple-overtime defeat to Wisconsin. And this time, it's making the bus trip south to Bloomington, where the Hoosiers (5-5, 2-6) hope to reclaim the trophy and return to the postseason for the third time in four years.

"I think when you have it and then you lose it, it changes your perspective, and I think our guys recognize that," Allen said. "I think that anything in life, when you have it, you take it for granted. When you lose it, you realize how special it really was and really is. I think that can be true of a lot of things for sure, and I think it's definitely true in this rivalry."

Allen grew up around the rivalry, playing high school football in New Castle, Indiana, before becoming a prep and college coach in Indiana.

So while Allen, like Brohm, would like to see Indiana and Purdue play for something more than a postseason berth, he thinks the week's result had a bigger impact than some realize.

"You get extended practice time, and that's huge for a young team," Allen said. "That gives you an extra — almost a whole extra spring in some ways of technique work and development. So that's huge. And then just in recruiting it's a big deal, you know, beating your rival."

One of Allen's biggest concerns Saturday will be trying to hold in check freshman receiver Rondale Moore.

And as a former defensive coordinator, Allen doesn't have to spend hours reviewing video to determine what trouble Moore can cause. "He's really, really fast, so speed is a good thing when you have it. That's why everybody wants it," Allen said. "And as you mentioned he's really strong. You can see it. He's hard to tackle. Breaks a lot of tackles. Just runs hard, and they get him the ball a lot, and they should. He's Just very difficult young man to scheme for."

The Boilermakers allowed Wisconsin running back Jonathan Taylor to rush for a career high 321 yards and three touchdowns last week, including the game-winner. He leads the Big Ten with 1,869 yards rushing this season.

This week they face a different challenge against the conference's No. 4 runner, record-breaking freshman Stevie Scott, who already has 1,033 yards rushing and nine TD runs. Indiana won't make it easy on the Boilermakers.

"This team is going to spread you out more, and they are going to give him a more lanes to run. They are going to throw the ball a little more than we've seen," Brohm said. "It's important that we contain him."

If Saturday's game turns on one factor, it could be takeaways.