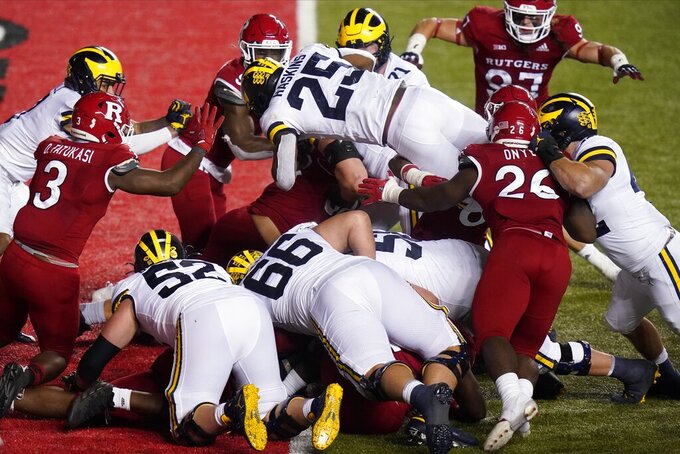 Michigan's Hassan Haskins (25) dives into the end zone for a touchdown during the third overtime of the team's NCAA college football game against Rutgers on Saturday, Nov. 21, 2020, in Piscataway, N.J. Michigan won 48-42. (AP Photo/Frank Franklin II)

It won't be easy against a vastly improved Rutgers defense but that's the challenge Brohm will face each time the two play-making receivers are in the lineup together.

“It’s about making sure we’re aggressive," Brohm said. “We look at creativity, we make sure the ball touches certain peoples’ hands numerous times — no matter which way it is — and if you’re trying to always throw downfield then you’ve got to get those touches."

Individually, Moore and Bell both possess incredible skill. But together, they give the Boilermakers (2-2) one of the nation's most explosive pass-catching tandems.

For opposing defenses, like the Scarlet Knights (1-4), it creates a huge headache — as coach Greg Schiano witnessed in his last trip to Ross-Ade Stadium.

Back in 2018, Schiano was Ohio State's defensive coordinator when Moore carved up the Buckeyes with 12 receptions for 170 yards and two scores, two carries for 24 yards, three kickoff returns for 46 yards and one punt return for 9 yards in Purdue's stunning 49-20 upset.

“Offensively, they’re explosive,” he said. “They got Rondale Moore back last week. He ’s one of the fastest, most explosive guys in college football, and they were already doing an excellent job on offense."

So Brohm's searching for a game-plan that features both.

Purdue quarterback Jack Plummer is expected to make his second straight start in place of Aidan O'Connell, who has an undisclosed injury.

Plummer started six games last season before suffering a season-ending broken right ankle. O'Connell took over after Plummer's injury, then won the starting job in camp. Plummer got his first action since the injury in last week's loss at Minnesota, going 35 of 42 with 367 yards and three touchdown passes. His one interception with less than a minute to go sealed the Golden Gophers victory.

In last week's loss, Rutgers was flagged 12 times for 100 yards. This season, the Scarlet Knights have 46 for 370 yards — 9.2 penalties and 74.0 yards per game. Schiano said he doesn't ever want to coach a team that leads the nation in fewest penalties but recognizes the current amount is too high.

“We’ve got to get that fixed,” he said. “It’s not from a lack of trying, but we may have to think of some different ways to do it. It could be any of the reasons. It could be (lack) of training camp. It could be that, you know, we don’t have as many officials in a practice as we usually do with the virus. I don’t know."