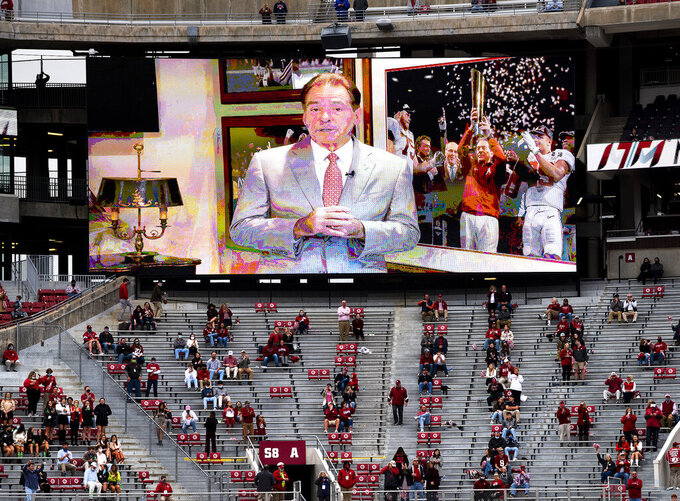 A prerecorded message from Alabama coach Nick Saban is shown on the big screen at Bryant-Denny Stadium before the Iron Bowl NCAA college football game between Alabama and Auburn on Saturday, Nov. 28, 2020, in Tuscaloosa, Ala. (Mickey Welsh/The Montgomery Advertiser via AP)

South Carolina interim coach Mike Bobo wasn’t sure what would happen when the Southeastern Conference kicked off its 10-game, all-league football season amid the coronavirus pandemic

But he couldn't have envisioned all that has unfolded, including but the end is in sight.

South Carolina and Kentucky look to become the first SEC teams to complete that schedule without disruption.

“I didn't think we'd make it this far, to be honest,” he said Tuesday.

Bobo wasn't alone in that sentiment.

Yet, despite some significant schedule shuffling and head coaches like Alabama's Nick Saban and Arkansas' Sam Pittman missing games due to COVID-19, the goal seems to be in reach.

Not that anyone is celebrating.

“We're not at the finish line. I'm very careful about that,” SEC Commissioner Greg Sankey said. “We can see it, you can feel maybe a little bit more optimism than a week ago. But the virus doesn't care about my optimism.”

That was apparent at several points this season when it seemed the SEC might have to shut down fall sports including football like it did to winter and spring sports last March.

The SEC postponed four of its seven games for coronavirus issues on Nov. 14 including contests involving No. 1 Alabama, No. 5 Texas A&M and No. 11 Georgia.

The next week, though, only one game was postponed and on Thanksgiving weekend, all six of the scheduled games were played — including the annual Iron Bowl where Saban was seen on Alabama's video board from home as he recovered from COVID-19.

“It seems like it's been a year or two within the last eight months,” Georgia coach Kirby Smart said.

Smart said his players have worked hard on the field and away from it to safeguard their opportunity to keep playing.

“I'm really pleased with how hard these guys have worked and continue to work, and the attitude they have when they come in each day because it's not like that everywhere when you talk to people,” Smart said.

There have been challenges, for sure.

Vanderbilt, like South Carolina, has let go of its coach Derek Mason.

Defending national champion LSU lost several players with eligibility to the NFL draft last spring and to opt outs this fall like receiver Terrace Marshall due to the virus. With a 3-4 record and a rescheduled game against Alabama this week, coach Ed Orgeron remains confident in the program's future.

“We built a championship program,” he said. “We will be champions again.”

South Carolina starting quarterback Luke Doty has endured many things since enrolling in January. He and his team lost most of spring practice, then was separated from teammates as the university closed down in the spring.

Since the football season began, he's had to mostly watch the season from the sideline, only getting in the past three weeks after coach Will Muschamp was dismissed last month and Bobo took over.

“This has been a crazy year with COVID and everything,” said Doty, who'll make his second straight start against Kentucky. “The most memorable things have been those COVID tests, other than that it's been pretty normal for us as far as game planning.”

Kentucky coach Mark Stoops said his program was doing remarkably well with few coronavirus positives his first half of the season. A wave hit around late October and early November with Stoops and his coaches having to manage a roster impacted by COVID-19 cases and contact tracing.

He said Monday he had more than two dozen people in the program with the virus. “But we're still competing and we're playing by the rules,” Stoops said. “Again, we're not going duck anybody and we're going to play. That's the way I've always been.”

Sankey believes that whatever the outcome between South Carolina and Kentucky, those teams completing the regular season is a significant milestone.

The SEC has played 55 of its 70 regular-season games. There are six more this weekend with the league planning for postponed contests on Dec. 12 and Dec. 19, alongside the championship game.

Alabama has clinched the West Division with Florida a victory away — the Gators play at Tennessee on Saturday — from the title game.

Sankey has been reminded several times from fans how important SEC football is. The day before the season kickoff on Sept. 25, Sankey was spotted on his daily run by a man in pickup truck who simply said, “Thank you."

A woman and long time Gators fan sent him a souvenir SEC football and a letter several pages long about what the sport has meant in her life. “I can't imagine not having football,” she wrote him, Sankey said.

He printed out a social media message that said simply, “Hope” and has kept it in view.

Sankey believed the league's decision making before and during the season has been well informed in an environment where absolutes are hard to find.

“We agreed to do the hard work to make seasons happen,” he said.