Several players to watch in the Southeastern Conference 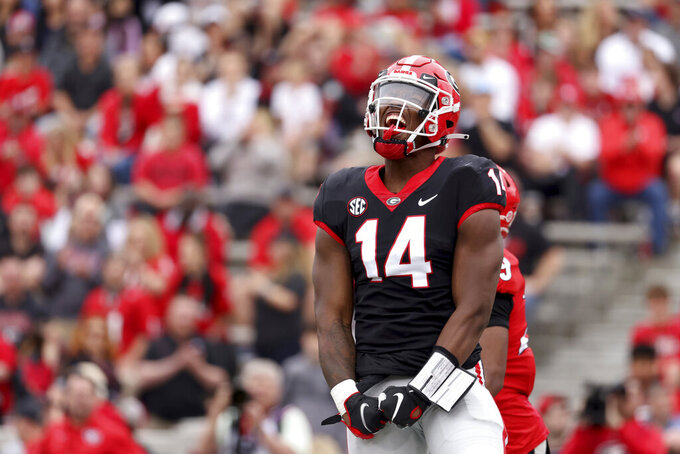 A look at Southeastern Conference players who appear poised to have breakout seasons:

Florida: Running back Montrell Johnson followed new Florida coach Billy Napier from Louisiana-Lafayette and was a bright spot during spring practice. He was the Sun Belt Conference freshman of the year and has a chance to see significant playing time behind Nay’Quan Wright.

Georgia: Former LSU tight end Arik Gilbert brings another playmaker to a talent-rich position, along with Brock Bowers and Darnell Washington. Gilbert sat out last season but had 35 catches as a freshman at LSU in 2020 before having to lose weight and handle other personal issues while not playing last season.

Kentucky: Wide receiver Tayvion Robinson, a Virginia Tech transfer, is among several looking to fill the huge void left by the departure of receiving leader Wan’Dale Robinson to the NFL draft after a 104-catch, 1,334-yard season. Tayvion Robinson totaled 1,555 yards and 113 receptions in 36 games with the Hokies.

Missouri: Freshman receiver Luther Burden III could be an early contributor on both offense and as a return man. The third consensus five-star recruit to sign with the Tigers caught 20 touchdown passes and returned eight punts for scores as a senior at East St. Louis High School. He was rated the 17th-best prospect and No. 2 receiver by 247sports.

South Carolina: Former Oklahoma starting quarterback Spencer Rattler appears poised to take over the Gamecocks offense. South Carolina would love it if he could replicate a terrific redshirt freshman season in 2020. Rattler was 15-2 as a starter for the Sooners, completing 70.1% of his passes for 4,595 yards. He passed for 40 touchdowns against 12 interceptions.

Tennessee: Wide receiver Jalin Hyatt could help fill the void left by Velus Jones Jr. The speedy Hyatt has caught 41 passes for 502 yards the past two seasons, but figures to have plenty of opportunities in Josh Heupel's offense.

Vanderbilt: QB Mike Wright could challenge Ken Seals for the starting job. Both saw significant action last season for a team that averaged less than 200 passing yards a game with 13 combined touchdowns and 15 interceptions.

Auburn: Shedrick Jackson is the most experienced player back at wide receiver, where the Tigers really need to improve for whoever winds up throwing them the ball. Jackson has started 17 career games and had 527 yards on 40 catches last season.

LSU: Defensive end BJ Ojulari returns after leading the Tigers with seven sacks, while making 55 tackles and 11.5 sacks. Ojulari, who only had 1.5 sacks against SEC competition, could start opposite Ali Gaye.

Mississippi: The Rebels are leaning heavily on transfers, including the potential starting backfield of QB Jaxson Dart (USC) and Zach Evans (TCU). Dart will try to outduel Luke Altmyer in preseason camp. Evans averaged 7.3 yards per carry in two seasons with the Horned Frogs. The Rebels are replacing quarterback Matt Corral and their top three running backs.

Mississippi State: Placekicker Massimo Biscardi is a transfer from Coastal Carolina at a position where the Bulldogs had significant issues. Biscardi was 46 of 57 in four seasons with Coastal Carolina and made at least one kick of 50-plus yards each year.

Texas A&M: There are plenty of candidates for breakout players among the newcomers from the nation’s top recruiting class. Another is defensive lineman Shemar Turner, the prized signee of 2021 and a member of the rotation last season behind DeMarvin Leal and Tyree Johnson.