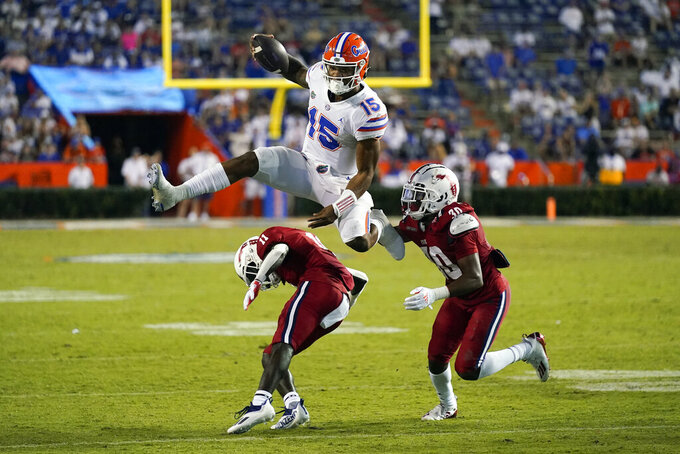 Tebow worked out with Richardson a few days after the freshman arrived on campus in January 2020. Richardson’s 6-foot-4, 236-pound frame stood out. So did his arm strength, mobility, mechanics and mentality.

“He’s very gifted,” Tebow said Friday, a day before No. 11 Florida (2-0) faces top-ranked Alabama (2-0) in the Swamp. “Obviously, anybody can know that when you see him. You see he’s gifted. But I think he’s got a very clean motion as well. … And then I think he’s got a mentality of he wants to be great. And I think the combination of those three things is something that’s pretty special.”

Tebow is hardly alone. Florida fans are begging to see more Richardson when the Gators host the Crimson Tide for the first time since 2011. Fourth-year junior Emory Jones has been less than impressive in two starts, throwing four interceptions against overmatched opponents Florida Atlantic and South Florida.

Richardson, meanwhile, has been one of the most dynamic players in the country. He had a 73-yard touchdown run in the opener and was even better in Week 2. He connected on TD passes of 75 and 40 yards to Jacob Copeland and scampered for an 80-yard score.

He had teammates, coaches and fans screaming one second and gasping the next when he grabbed his right hamstring at the end of that last run. He sat out the rest of the game, leaving everyone to wonder about his availability against Alabama. He practiced all week and is expected to play.

How soon or how much is up to coach Dan Mullen, who insists Jones is his starter and Richardson remains a change-of-pace option.

But after accounting for three one-play touchdowns in eight series of work off the bench, Richardson could be in line for a more expansive role against the defending national champions and in front of a sold-out stadium.

“He’s probably not necessarily the quickest guy, but when he gets going, he can run away from you,” said Tebow, who returned to his role as SEC Network analyst after failing to make an NFL comeback as a tight end at age 34. “You see him kind of run with guys and then he gets 10, 15 (yards downfield), and at about 20, all of a sudden, he starts to leave them.

“He’s got that long-distance kind of track speed that can break away for a lot of big plays.”

Tebow’s on-air teammate, former Alabama and NFL safety Roman Harper, offered a word of caution to anyone who thinks Richardson is ready to take over.

“He’s an explosive athlete. He can take it to the house at any given time, and that’s running it or throwing it. He’s lightning in a bottle, can’t wait for it to happen,” Harper said. “But the whole offense is just so simplified when he’s in. Run, quarterback run or (deep) shot plays. He does not have the effect of the whole playbook or the whole passing game.

“That will not beat Alabama. You won’t beat it running just that offense. They will adjust and just kind of put you away.”

Florida has lost seven in a row to the Crimson Tide, a skid that began with the Southeastern Conference championship game in 2009. That was Tebow’s penultimate game with the Gators — and the last time anyone has given the program as much hope wearing No. 15.