Tim Tebow would 'love' to coach but focused on charity work 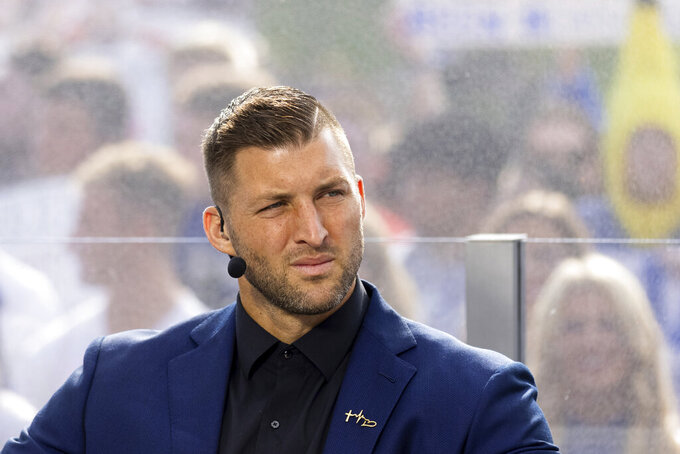 FILE - SEC Nation host Tim Tebow listens to his co-hosts during the SEC Nation broadcast in Lexington, Ky., Saturday, Oct. 9, 2021. Tebow was visiting with Auburn athletic director Allen Greene along with fellow members of ESPN’s SEC Nation crew when he got a text message from a friend last week congratulating him on becoming the head coach at Florida. The confusion began when former NFL quarterback and current ESPN analyst Robert Griffin III said the Gators should hire Tebow to replace Dan Mullen, who was fired on Nov. 21. (AP Photo/Michael Clubb, File)

Tim Tebow was visiting with Auburn athletic director Allen Greene along with fellow members of ESPN’s SEC Nation crew when he got a text message from a friend last week congratulating him on becoming the head coach at Florida.

“I’m like: ‘What do you mean? Congrats on the new gig. What is happening?’” Tebow said on the AP Pro Football Podcast.

The confusion began when former NFL quarterback and current ESPN analyst Robert Griffin III said the Gators should hire Tebow to replace Dan Mullen, who was fired on Nov. 21.

“He thought it was like a done deal or something,” Tebow said of his friend. “And I was like, ‘Oh, no.’ I thought it was nice and it was cool of RG3 to think of me. He’s such a nice guy and we’ve gotten along over the years. But it was funny, and he definitely made a lot of people reach out to me for a couple of days.”

Griffin doubled down on his suggestion that Florida should hire one of its most popular alums.

“I think what people have to realize is in today’s age with the transfer portal and just how different these kids are being coached and recruited, if you want to make a splash, you have to look in different areas,” Griffin told the AP.

“So it might not be that Tim Tebow is the answer for the Gators, and he’s going to come in and turn the program around. But what he will do is he’ll bring excitement to the program, recruits will want to come play for him. And right now, they’re struggling to compete in recruiting against Nick Saban, Jimbo Fisher, Kirby Smart. And those guys are not slowing down, right?

“So that’s the thought process behind going after a guy like Tim Tebow and say: ‘All right, we’re going to surround you with a great staff. We need you to be the motivator and the leader and go get these guys to want to be a part of the Florida Gator franchise and the traditions again.' And that, to me, is worth it.”

Tebow led Florida to a pair of national championships and was the 2007 Heisman Trophy winner. He said he has thought about coaching at some point, but he doesn’t want to take time away from his charitable work.

“I’ve considered it, and there would definitely be a passion behind it,” Tebow said. “I think the hardest thing for me is there’s so many things that I am very passionate about. No. 1 being everything that we’re doing at TTF (Tim Tebow Foundation). Now we’re in 67 countries and we’re building more hospitals right now and we’re building more special needs orphanages and villages and rescuing girls from trafficking. And, I just am so passionate about that. I would love to coach and love to support, build culture and love on student athletes, but I think it would be hard. I know if I did that, I would be so all-in, and it would really be hard to do some of the other things that I’m so passionate about as well.”

Tebow and his foundation have been fighting trafficking since 2013.

“We just believe it’s one of the greatest evils in the world today, and it’s not just something that is happening overseas or in a Third World country or when you turn on the movie ‘Taken,’” Tebow said.

Tebow attempted to return to the NFL as a tight end for his former Gators coach Urban Meyer and the Jacksonville Jaguars over the summer after nearly six years away from the game. But his comeback bid ended following one preseason game.

“It’s something I’m grateful to be a partner in, something I feel like we can give current student athletes and former student athletes an awesome opportunity to be able to use their name, image and likeness in partnership with the school, in partnership with opportunities like the Heisman to really be able to come up with some awesome NFTs that can be really exciting and really fun,” Tebow said.