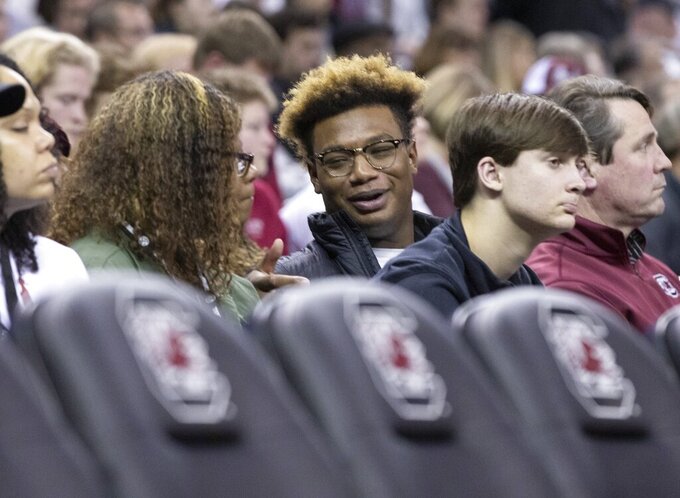 McKinnley Jackson, a huge and talented defensive tackle from Mississippi, was one of the few five-star recruits whose college choice was a mystery coming into signing day.

“I'll keep this short, simple and sweet,” Jackson said during a news conference Wednesday at George County High School in Lucedale, Mississippi. “For the next three to four years, I'll be attending Texas A&M.”

The five-star prospect picked the Aggies over Alabama and LSU, allowing one more school to break into a small group that landed the majority of the top available players. Signing day is typically about the rich getting richer, and this year the best classes were especially top heavy.

According to 247 Sports' composite rankings, there were 31 five-star prospects in this year's class. Six schools signed 22 of those players. Clemson led the way with five as part of the highest-rated class coach Dabo Swinney has ever signed. Alabama and Georgia each landed four five-star players. National champion LSU, Ohio State and Oregon each had three.

For the second time in three seasons, 247 Sports crowned Georgia the recruiting champion, with Alabama and Clemson close behind.

By landing Jackson, Texas A&M became the sixth school with more than four top 100 players in its new freshman class, The Aggies came away with six, which means 53% of the top 100 players signed with just six schools.

Burch committed to South Carolina during the early signing period, but never actually signed a national letter of intent with the Gamecocks and he took a late visit to LSU.

At a signing day ceremony Wednesday at Hammon School in Columbia, South Carolina, Burch had only a Gamecocks hat. South Carolina coach Will Muschamp, whose son plays on the same high school team with Burch, was sitting just a few feet away.

Burch never made an announcement nor did any interviews, simply saying: “For the next three or four years I’ll be with my friends.”

When South Carolina posted a list of 21 signees a few hours later, Burch's name was not among them. The signing period ends April 1.

It's been three years since the early signing period in December was implemented in college football, and it is clear the February frenzy is gone for good.

"Today used to be the craziest day on the face of the earth," Florida coach Dan Mullen told reporters.

Signing day surprises are now rare as most teams have their classes complete or close to it in December. Ohio State, for example, signed one player Wednesday to complete its class.

Two of the few decisions that could be called surprises involved Florida schools.

Four-star safety Avantae Williams from Deland, Florida, signed with Miami instead of the University of Florida. And Florida State lost out on four-star receiver Malachi Wideman, who flipped from a longtime verbal commitment and signed with Tennessee.

Oregon finished off the top class in the Pac-12 by flipping 340-pound defensive tackle Jayson Jones from Caldera, Alabama. The four-star player had been a verbal commit to the Crimson Tide, but Oregon head coach Mario Cristobal, a former Alabama assistant, was able to lure him to Eugene.

New FAU coach Willie Taggart once said when asked whether his son, quarterback Willie Taggart Jr., would play for him in college: “Only if I need him.”

Taggart Jr., a three-star prospect, signed with the Owls on Wednesday.

Memphis is getting another Gainwell. Running back Kory Gainwell from Yazoo County High School in Mississippi signed with the Tigers to play with his brother, Kenneth, who was one of the leading rushers in the nation as a redshirt freshman last season.