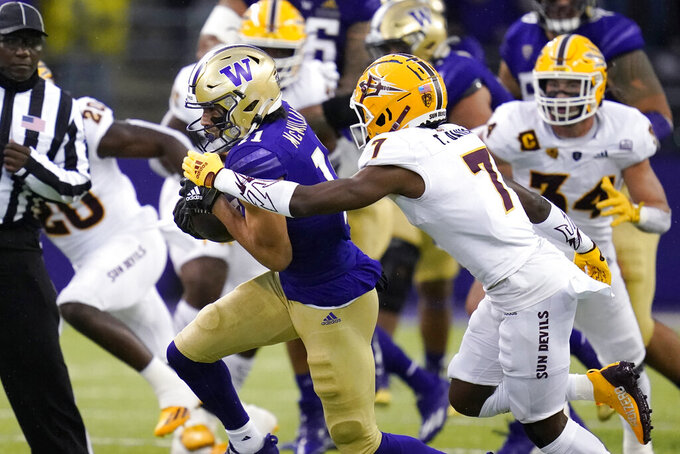 Washington's Jalen McMillan, left, runs with the ball as Arizona State's Timarcus Davis moves in for the tackle during the first half of an NCAA college football game Saturday, Nov. 13, 2021, in Seattle. (AP Photo/Elaine Thompson)

SEATTLE (AP) — With rain pouring and several season goals slipping away, Arizona State put it in low gear Saturday night with a 20-play, 81-yard drive that consumed more than 9 minutes and almost all of problem-plagued Washington's resolve.

By the time the drive was over the Sun Devils had reversed the momentum and erased a 14-point deficit against a team reeling from off-the-field problems.

“I was so tired. I was looking at the D lineman look at me and I was acting like I wasn't tired," guard LaDarius Henderson said as he mimicked his fierce face. “But you've got to fight, you've got to finish.”

The Sun Devils ((7-3, 5-2 Pac-12) did just that as Jayden Daniels capped the drive with a 5-yard touchdown run to cut the lead to 24-21 midway through the fourth quarter. Rachaad White rushed for 184 yards and two scores and completed the comeback with a 10-yard touchdown run with 1:11 left. Merlin Robinson put the game away with a pick-6 with 37 seconds left.

Arizona State remains one game back in the Pac-12 South with two games to go, and will be relying on White to continue to carry the load.

“(Coaches and teammates) look me in my eye and they understand where we're at at this point point in the season and what is going on,” White said. “So, honestly, it felt great for me because I want to step up my game. They need me to be there for them and I need them to be there for me.”

Arizona State coach Herm Edwards said the team regained its footing while holding off USC for a 31-16 win last week after losing two in a row. It was a game that also was decided in the fourth quarter.

“It says something about the team in the fourth quarter and having to do that two in a row,” Edwards said. “It says a lot. I think last week’s game was a game that they found their swagger again, playing at home against USC and it’s a 17-16 game in the fourth quarter. And they didn’t blink.”

Unfortunately for UW, the same was true this week. The Huskies (4-6, 3-4) must win out to gain bowl eligibility and avoid their first losing season since 2009.

The Huskies turned turmoil into motivation as they jumped to a 14-0 lead without suspended head coach Jimmy Lake and behind new offensive coordinator Junior Adams, the wide receivers coach who was replacing the fired John Donovan. But many of the problems that have plagued Washington this season re-emerged as mistakes proved costly.

Dylan Morris outraced the Sun Devils defense to the pylon on a bootleg to make it 14-0 with 5:06 left in the first quarter. He was 7 of 9 for 67 yards on the first two drive and the Huskies had 127 yards in the first 10 minutes of the game.

UW stalled out from there, however, after interim coach Bob Gregory decided to insert freshman quarterback Sam Huard into the game. Huard, the nation’s top-rated pro-style quarterback coming out of high school, guided the Huskies to a first down. But UW punted three plays later and the team never regained the kinetic energy it had in the first 10 minutes.

Morris finished with just 151 total yards passing and UW had 99 yards of total offense over the final three quarters. The larger breakdown came on defense, however, as the Huskies just couldn't stop the Sun Devils rushing game down the stretch.

“For the most part it was missed tackles and a run-fit here and there,” said interim UW coach Bob Gregory, the team's defensive coordinator. “That's usually what it comes down to.”

Arizona State: The Sun Devils were 0 for 8 on third and fourth down midway through the third quarter, but converted three third downs and two fourth downs the rest of the way to earn the victory. Though they have two conference games left, Utah holds the head-to-head tiebreaker.

Washington: Returner Giles Jackson was a constant source of electricity for the Huskies, setting them up with momentum at the start of key drives in a game they had to win to remain in the hunt for a postseason bowl. He finished with 103 total return yards, including 83 on kickoffs.

Washington: At Colorado next Saturday.