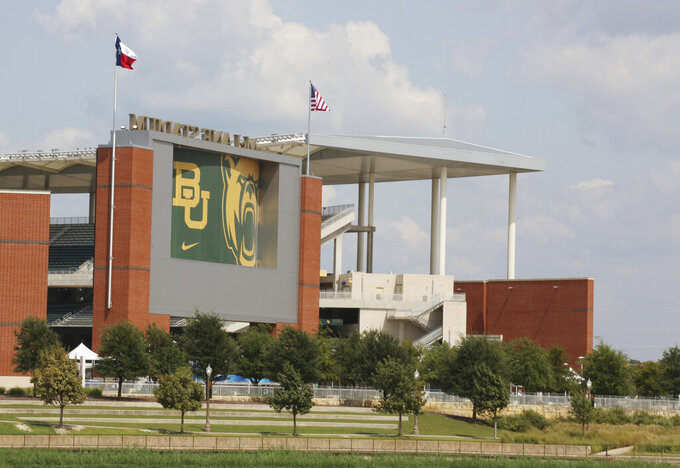 WACO, Texas (AP) — Baylor coach Dave Aranda expressed optimism Monday that his team will be able to play its Big 12 opener against Kansas on Saturday after having to call off a game last weekend because of positive COVID-19 tests that affected a position group.

Declining to discuss specifics, Aranda said the Bears expected about five players back through the week at “the position that was affected,” as well as five or six players back at other positions.

“We’re feeling pretty strong about our team being fortified and being strengthened,” Aranda said. “The wild card in all it is going to be these tests that we take (this week). I feel confident about (playing). But after you’ve been hit with one of these, you’re very aware.”

Aranda, the former LSU defensive coordinator still waiting on his Baylor debut, said some of the expected returning players were coming back from injury, concussion protocol and “various other things" and that they weren't all related to COVID.

Baylor released weekly testing results later Monday that include student-athletes and staff from multiple sports, not only football. There were four active cases, two of them asymptomatic, and the 18 cases overall being monitored, included primary contacts. The school reported three new cases since last week.

The Bears had scheduled non-conference games the past two weeks called off because of the coronavirus. Louisiana Tech had an outbreak before the Bulldogs were scheduled to play at Baylor on Sept. 12. That game was replaced by a hastily arranged reunion with former Southwest Conference rival Houston, but Baylor had to call that off about 24 hours before Saturday's scheduled kickoff.

Big 12 policy calls for a 53-player roster to play a game, with that number including at least seven offensive linemen, four defensive linemen and one quarterback.

“We can still choose to play if we think it’s OK to to play it, if we think that we’re fine in terms of health and safety for our student athletes," athletic director Mack Rhoades said Monday. “Obviously, we didn’t think that was the case."

Rhoades said only that the Bears didn't meet one of the minimums. He also didn't provide specific numbers, but said half the players affected were positive tests, and the other half were because of close contact that put those players in a 14-day self quarantine.