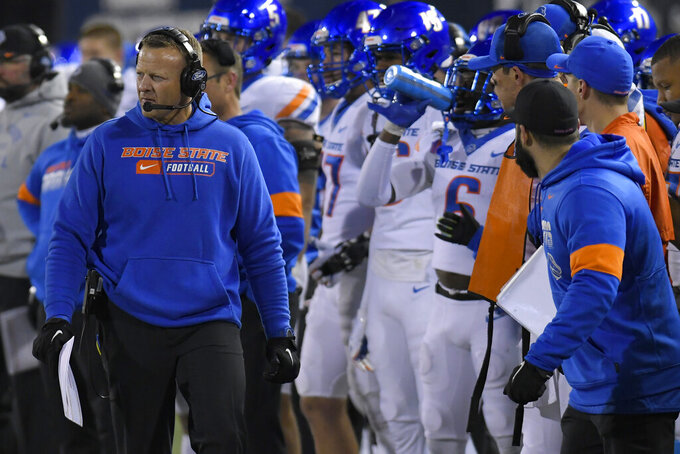 Boise State tries to finish Mountain West regular-season play undefeated for the first time ever. The Broncos have wound up with one loss in MWC play five times (2011, ‘12, ‘14, '17 and '18). They wrapped up the Mountain Division with a win over Utah State last weekend. The Broncos face Hawaii in the championship game on Dec. 7. For Colorado State, it’s a chance to close out the season on a high note. Coach Mike Bobo is 0-4 against Boise State and his future is uncertain after back-to-back losing seasons.

Boise State running back George Holani vs. Colorado State front line. Holani is one of the favorites for the league’s freshman of the year award after putting together a campaign that includes 870 yards rushing and seven rushing TDs. He’s had three 100-yard games this season. The Rams are allowing 205.4 yards rushing per game this season.

Boise State: NT Sonatane Lui. Recorded 42 tackles and 2 1/2 sacks this season. He had a 24-yard fumble recovery for a score on Nov. 16 against New Mexico.

Colorado State: QB Patrick O’Brien stepped in after Collin Hill suffered another ACL tear in his left knee when he was hit low at Arkansas. O'Brien has thrown for 2,514 yards and 11 TDs.

Boise State reached the 10-win plateau for a 17th time since joining the FBS in 1996. It's the second-most during that time behind only Ohio State (19 times). ... Colorado State will have 13 players go through senior day ceremonies at Canvas Stadium. ... The last time the Rams played on the Friday after Thanksgiving was when they traveled to Air Force on Nov. 28, 2014. It was the final game by then-head coach Jim McElwain. .... Colorado State is looking for its first win over a ranked opponent since beating No. 22 Virginia and No. 7 Colorado to start the 2002 season. The Rams are 13-34 against ranked teams since 1993.