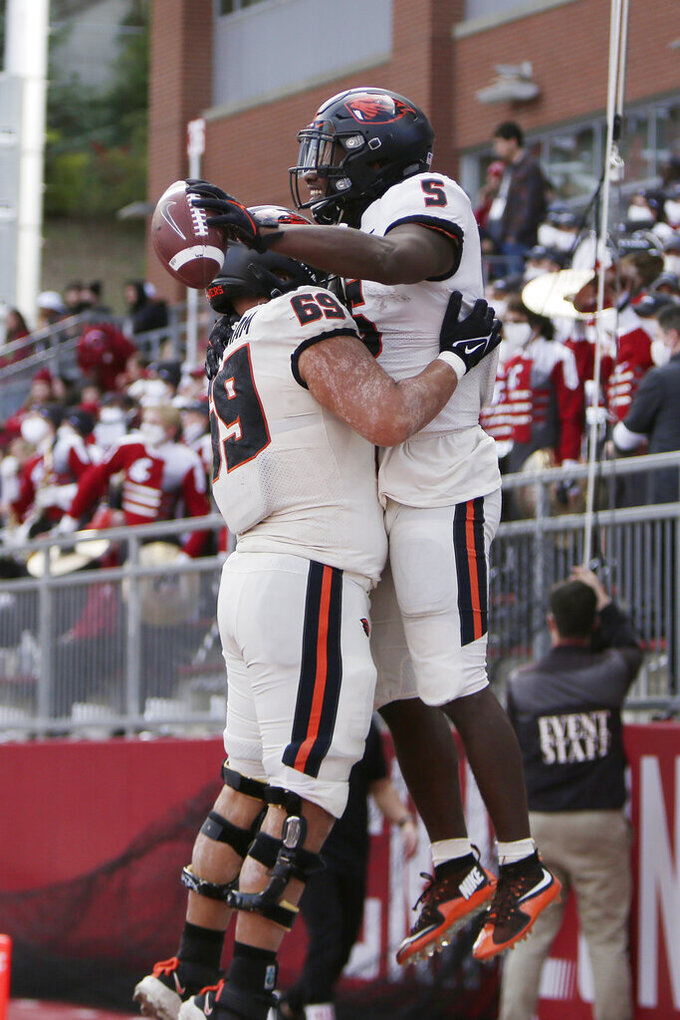 Travell Harris caught eight passes for 147 yards for the Cougars (3-3, 2-2 Pac-12), who beat Oregon State for the eighth consecutive time.

B.J. Baylor rushed for 145 yards and Deshaun Fenwick added 127 yards and a pair of touchdowns for Oregon State (4-2, 2-1 Pac-12), which saw its four-game winning streak broken.

De Laura completed 32 of 46 passes and was intercepted once. The Washington State defense also forced Oregon State to turn the ball over on downs during its last possession of the game.

“He's grown the trust of everyone in this program,” Washington State coach Nick Rolovich said of de Laura. “He makes everything around him better.”

Washington State depended on its pass attack in the second half, after trailing 10-3 at halftime.

“We needed more out of our pass game because the numbers were on our side,” Rolovich said. “We did a really nice job on the second half on third down conversions.”

The Cougars iced the game with touchdowns on four straight possessions in the second half, which Rolovich said will be a confidence boost for a team that has had trouble scoring this season.

“That's the fruits of the labor for the work they put in,” Rolovich said of the scoring burst. “We're getting better.”

Oregon State coach Jonathan Smith said he told his players the loss was a team effort.

“I told the team I think all of us, (offense, defense, special teams) contributed to this loss, but I think what sticks out to me is the fake punt call, you know to start the second half,” Smith said. “We just anticipated a different look, thought it would be an awesome chance because our punter"s pretty good, but I’d take that one back.”

“We gotta find a better balance than we’ve got, just a consistency to be a true threat throwing it and being explosive,” Smith said.

Fenwick said the team will bounce back.

“We got good guys, got good players, got good coaches, we’ll be fine,” he said. “They just got us today. They made one more play today.”

“We were in the game the whole time, and I feel like we’ve got the best team in the Pac,” Fenwick said.

Jack Colletto ran up the middle for two yards and an Oregon State touchdown in the opening seconds of the second quarter.

Everett Hayes kicked a 39-yard field goal to lift Oregon State to a 10-3 lead late in the second quarter. The Cougars drove to the Oregon State 7 on their next possession, but had to turn the ball over on downs.

Oregon State quarterback Chance Nolan was intercepted by George Hicks III, giving the Cougars the ball at the Oregon State 28 with less than a minute remaining in the second quarter. The Cougars drove down to the 4, but Omar Speights intercepted de Laura's pass and OSU led 10-3 at halftime.

Oregon State took the second half kickoff and their drive stalled at the 50. They tried a fake punt but punter Luke Loecher's long pass fell incomplete.

The Cougars took over and Max Borghi's 3-yard touchdown tied the game at 10-10. It was the first of four straight touchdown drives for Washington State.

Oregon State drove down the field to the red zone, but Nolan's pass was batted around and finally intercepted by Brennan Jackson at the Washington State 5.

De Laura fired a pass at midfield to Joey Hobert, who made a great broken field run to complete a 55-yard touchdown and lift Washington State to a 17-10 lead late in the third.

Oregon State struck back immediately, with Baylor ripping off a 50-yard run to the WSU 15, and Fenwick covering the remaining yards on the next play for a touchdown to tie the game at 17-17.

The Cougars came right back, with de Laura connecting with Harris on a 58-yard completion to the Oregon State 14, and de Laura hitting Lincoln Victor on the next play for a touchdown that put the Cougars ahead 24-17.

De Laura threw a 1-yard touchdown pass to Deon McIntosh for a 31-24 WSU lead, and the winning points, with 5:25 left.

Oregon State drove down the field, but had to turn the ball over on downs at the Washington State 5 with 33 seconds left.

Washington State coach Nick Rolovich confirmed that he has requested a religious exemption from the state to avoid being vaccinated against COVID-19. The news was first reported in USA Today. “I'll confirm that,” Rolovich said at the postgame press conference. Rolovich said the controversy over his refusal to get a vaccine has been an “incredible stress.” Washington Gov. Jay Inslee has set an Oct. 18 deadline for state employees such as Rolovich to get vaccinated or risk losing their job.

Oregon State was shooting for its first five-game winning streak since 2013, but was held 12 points below its Pac-12 leading average of 36 points per game. The Beavers totaled 309 rushing yards.

Washington State, which leads the series 56-47-3, scored its highest point total against an FBS opponent this season.

Oregon State has a bye next weekend before hosting Utah on Oct. 23.