Egg Bowl: It's Kiffin vs Leach in more than a passing fancy 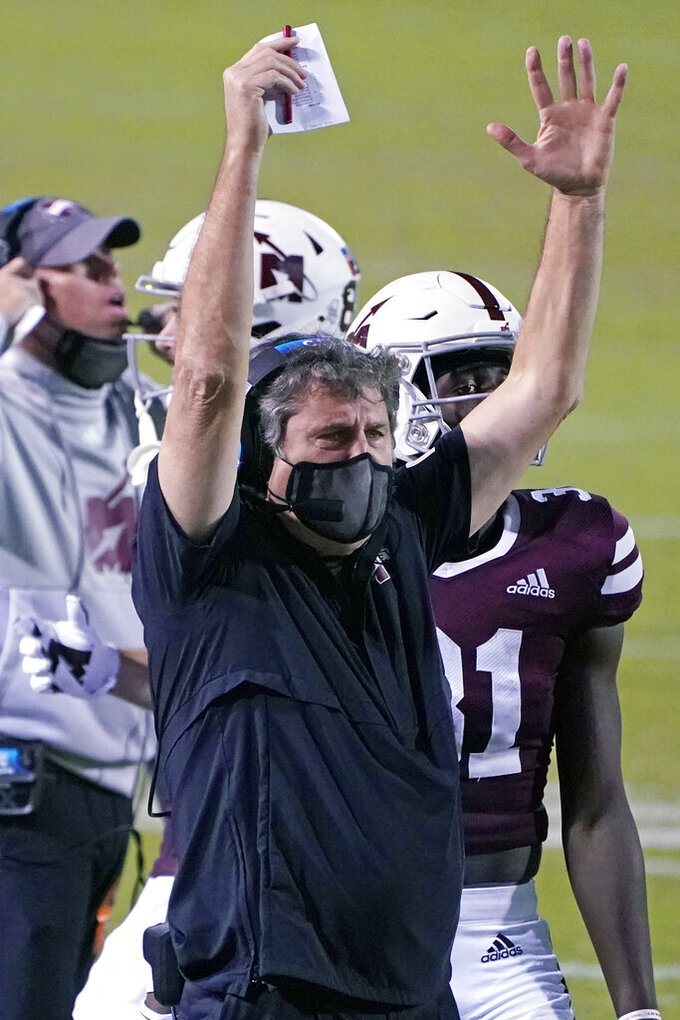 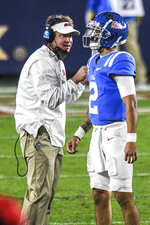 Mike Leach and Lane Kiffin have brought sound bites and plenty of passing to Mississippi State and Mississippi, if not yet wins.

But the two outspoken new Southeastern Conference coaches with impressive offensive pedigrees finally get to match wits — and talent — in Saturday's Egg Bowl, which was shuffled back from Thanksgiving Day under the revamped league-only schedule.

“I know it’s very meaningful to people and I know that it’s in conversation all year round,” the Bulldogs' Leach said. “Every day. There’s not a day that I don’t hear somebody mention the Egg Bowl. So, I know it’s a very meaningful game.

”I also know that there’s been plenty of them that were exciting to watch, long before I was ever in the state of Mississippi."

That certainly includes last season when Mississippi State (2-5 SEC) won 21-20. It was a game that might have gone to overtime but for a missed extra point in the final seconds that was pushed back by an unsportsmanlike conduct penalty by star wide receiver Elijah Moore of the Rebels (3-4).

The game two years ago was marred by a fight that led to four ejections in the second half as the Bulldogs romped 35-3.

“We both have to manage our teams,” Kiffin said. "We’ll talk a lot to our team as we get closer to the game about playing with great composure.”

Both programs remain very much works in progress, especially with their first seasons played during a pandemic.

Despite going 0-4 in October and losing four of five, Mississippi State hung in there with No. 13 Georgia before losing 31-24. The Bulldogs still have a chance to avoid a losing record.

“I don’t think we’ve hit our potential yet,” said Leach, who made a splashy offensive debut in a win over defending national champion LSU. “We’re a group that we’re young enough that we’re definitely going to change to the positive."

The Rebels have won two straight games against other teams ranked near the bottom of the SEC standings, scoring 54 points against Vanderbilt and 59 versus South Carolina. They got an extra week off with the postponement of a game at No. 5 Texas A&M.

Freshman quarterback Will Rogers served up a reminder of how potent the Air Raid offense can be against Georgia, posting career highs of 41 completions on 52 attempts for 336 yards passing and a touchdown. It was the second-highest passing yardage total for the Bulldogs. The pass defense faces a stiff challenge against Matt Corral and the Rebels.

Mississippi State allowed 401 yards and four touchdowns through the air in that game. But Georgia also produced only 8 yards rushing.

Moore has emerged as the nation's most prolific receiver with 74 catches for 1,054 yards and eight touchdowns. He has a shot at Egg Bowl redemption after his ill-timed flag for celebrating a touchdown by mimicking a dog urinating on the field.

Georgia transfer safety Otis Reese will finally make his Ole Miss debut, and Kiffin thinks he’ll play “a lot.” Reese was cleared by the NCAA on Nov. 20 to play for the Rebels. He played in 25 career games for Georgia the past two seasons, though he only started one game.

“Even though he sat out, he still practices all the time,” Kiffin said. “He’s in great shape. He’s a great practice player. He was always preparing like he was playing. I would anticipate him playing a lot.”

The Bulldogs rank third in SEC against the run, allowing just 110.1 yards per game, and are fourth in total defense at 366.9. Georgia ran the ball just 23 times for its meager yardage, but MSU needed a boost after yielding an average of nearly 179 yards on the ground the previous three games, including at 208 at top-ranked Alabama.

True freshmen played a big offensive role for Mississippi State against Georgia, accounting for 217 of MSU’s 358 yards. That group has totaled nearly 800 yards and 35% of its rushing and receiving totals. Running back Jo’quavious Marks has a rookie-record 44 receptions and can break the single-season top 10 with 14 more catches.