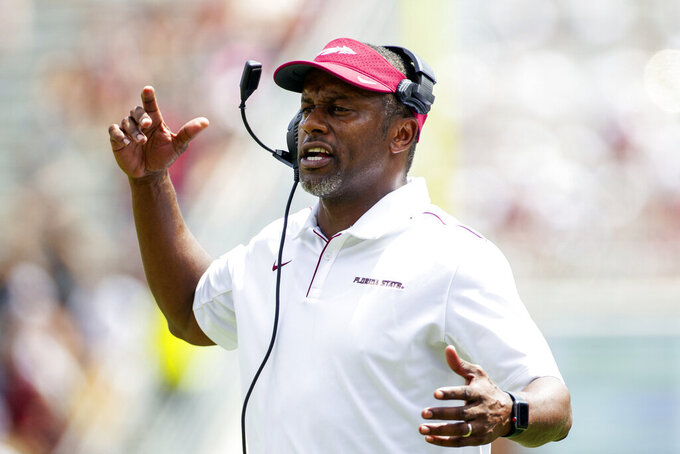 Last weekend, the Seminoles seemed to be on a roller coaster against Boise State in their season opener.

The first half against the Broncos was about as good as it gets for Florida State. The second half was about as bad as the Seminoles have looked.

And third downs were a problem for Florida State on both sides of the ball. The Seminoles converted just 1 of 12 third-down opportunities in the loss to Boise State while the Broncos were able to convert on 10 of 19 third-down chances.

Coach Willie Taggart and the Seminoles are looking to make sure they have corrected those third-down issues when they take on ULM.

"I thought our defense did a good job on first and second down to get them in those situations, and then on third down we didn't pressure," Taggart said. Boise State quarterback Hank Bachmeier "completed some passes in there. We've got to be better fundamentally and technically in order to defend those plays.

The third-down problems led to time of possession challenges — Boise State had the ball for 40 minutes and three seconds and ran 108 plays.

Defensive coordinator Harlon Barnett said in retrospect that the Seminoles should have been more aggressive and that he leaned too much on a zone defense.

"In doing this over the years, I probably got a little too conservative and figured, 'Hey, play top-down, make the tackle, get off the field,'" Barnett said. "One of those type things as opposed to being really aggressive. Believe it or not, my personality is aggressive. Just trying to overthink it. That's on me."

Florida State did some positive things against Boise State and at one point had an 18-point lead. This week, their goal is to play a complete game and avoid third-down lapses.

"We can't get into those situations," Blackman said. "We've got to make sure we hit it good on first and second down and gain yards so we can put ourselves in third and manageable."

Some other things to watch on Saturday when Florida State hosts Louisiana-Monroe:

Senior starting defensive back Levonta Taylor, who is not listed on Florida State's two-deep depth chart, is eligible to play on Saturday against Louisiana-Monroe, Taggart said. Taylor made eight starts in 2018 before a back injury ended his season. He also started the opener against Boise State, making five tackles and recording two quarterback hurries. But Taylor was not listed on the two-deep depth chart this week. Cyrus Fagan is listed as the starter and Akeem Dent the backup at strong safety.

"It sends a message that you've got to take care of your business," Taggart said of Taylor. "Plain and simple."

Louisiana-Monroe senior quarterback Caleb Evans has completed 537 of 887 passes (.605) for 6,754 yards, 38 TDs and 25 interceptions in 32 career games. He will challenge a Florida State secondary that held up for a half in the opener but struggled in the second half and allowed 407 passing yards. Evans already ranks among ULM's all-time top 5 in completion percentage (second), pass completions (fifth) and passing yards (fifth).

In the last 20 seasons, only 10 true freshmen started a season opener for Florida State. Right guard Dontae Lucas became the latest when he started against Boise State.

Florida State defensive back Hamsah Nasirildeen forced two fumbles in the season opener, just one shy of the Seminoles' entire total from the 2018 season. The two fumbles and one interception are a positive development for a defense that forced just 15 takeaways last fall.

The Seminoles are 298-96-4 all-time at Doak Campbell Stadium, a winning percentage of .754. A win over ULM on Saturday means that Florida State could get No. 300 against Louisville on Sept. 21.