Heisman 2022: Who stands between Bryce Young and 2nd trophy? 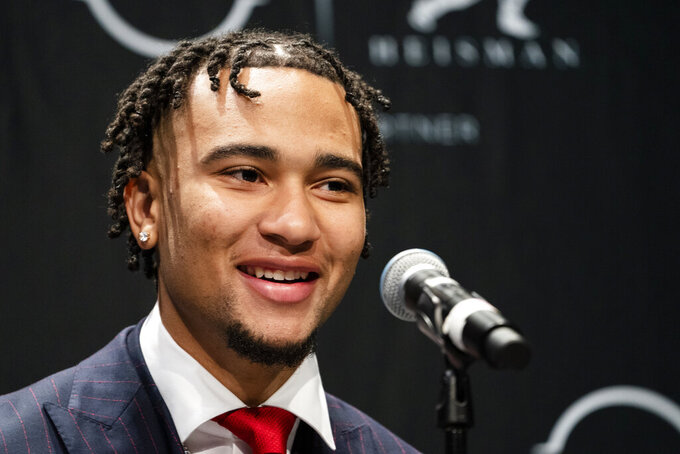 NEW YORK (AP) — Alabama's Bryce Young and Ohio State's C.J. Stroud have been friends since middle school, competing in basketball and football while growing up in Southern California.

Young can already claim one victory against Stroud, winning the Heisman on Saturday night over his fellow finalist.

The two quarterbacks will return to college in 2022 and resume the competition from afar.

Young is the fifth sophomore to win the Heisman and sixth player in his second year of college. Stroud is a second-year player and first-year starter, like Young, but a redshirt freshman by eligibility.

In 2022, Young will try to become just the second player to win two Heismans. Ohio State running back Archie Griffin is the only two-time winner of college football’s top player award, taking it home in 1974 and '75.

Back then the Heisman was dominated by seniors, so it was rare to have a returning winner in college football. That's changed over the last two decades.

In 2007, Florida quarterback Tim Tebow became the first sophomore to win the award.

The next two winners (Oklahoma's Sam Bradford and Alabama's Mark Ingram) also were sophomores. Bradford was a sophomore by eligibility but in his third year at Oklahoma when he won the Heisman in 2008 after redshirting as a freshman.

Texas A&M quarterback Johnny Manziel was the first redshirt freshman to win the Heisman, in 2012, and Jameis Winston of Florida State matched the feat the following year.

Lamar Jackson of Louisville also was a sophomore when he won the Heisman in 2016.

Among the sophomore and redshirt freshmen to win the Heisman, only Tebow played two more seasons in college after winning the award. Tebow finished third in the voting in 2008 and fifth in 2009.

All the others played just one more year of college football and none came particularly close to winning another Heisman. Manziel was fifth in 2013; Winston was sixth in 2014 and Jackson third in 2017.

History suggest the odds are against Young repeating. Or maybe college football is due for another two-time Heisman winner.

Expect Stroud to be a contender, too.

Assuming talented juniors such as Kenneth Walker III of Michigan State and Breece Hall of Iowa State move on to the NFL, who else will go into 2022 with Heiman hype?

Williams will be a fascinating case study. The former five-star prospect signed up to play with Lincoln Riley, who is now at Southern California. With the new NCAA transfer rules, the first question is: Does he stay? And if so, can Oklahoma continue to be a Heisman factory without Riley, who coached winners Baker Mayfield and Kyler Murray?

New Sooners offensive coordinator Jeff Lebby has a track record of prolific offenses at UCF and Mississippi. Seems like a good match for Williams, who is likely to be a Heisman contender no matter where he goes to school.

Riley's new quarterback was thrust into a starting role as a freshman this season and showed promise on a team that wasn't very good. The Trojans would need a big turnaround in 2022 to propel Dart into the Heisman conversation. Could happen.

These are tough times for running backs to win the Heisman. Young became the 18th quarterback winner this century, compared with three running backs.

Wisconsin runners usually get the combination of opportunity and team success to make it into the conversation, and Allen looks like the next great Badgers back. After barely seeing the field in Wisconsin's first four games, he ended up running 1,106 yards and with 7.06 yards per carry.

Tucker is worth mentioning because he carried a limited Orange offense this season, with 1,751 yards from scrimmage and 14 touchdowns. But if a running back on a good team such as Walker (sixth in the Heisman voting) can't break the top five, the chances that Tucker can come close in 2022 seem remote unless Syracuse surprises.

A case could have been made for Anderson to win this year's Heisman after putting up 15.5 sacks and 31.5 tackles for loss. He finished fifth. Though fellow edge rusher Aidan Hutchinson of Michigan was the runner-up to Young, so maybe Heisman voters are starting to warm up to the idea of a defensive player winning the award.

Receivers winning the Heisman have been even more rare than running backs because their quarterbacks usually get the credit. And Smith-Njigba is playing with a Heisman finalist in Stroud. Still, he was good enough this season to lead a team with two possible first-round NFL draft pick receivers in catches (80) and yards receiving (1,259).