Jackson sharp as Maryland blows out No. 21 Syracuse 63-20 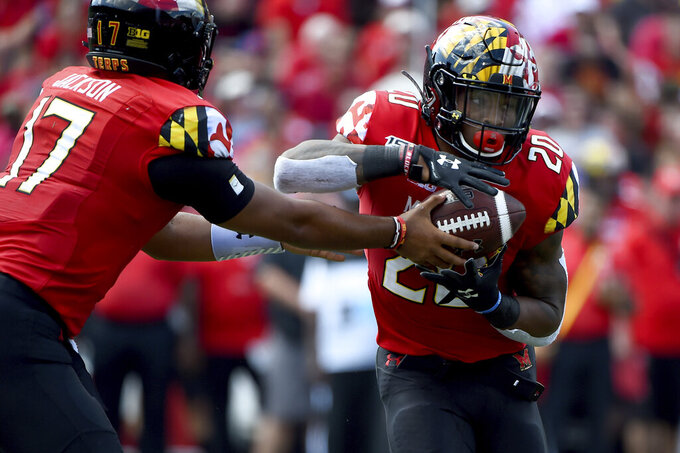 Maryland quarterback Josh Jackson (17) hands the ball off to running back Javon Leake (20) during the first half of an NCAA college football game against Syracuse, Saturday, Sept. 7, 2019, in College Park, Md. (AP Photo/Will Newton)

COLLEGE PARK, Md. (AP) — Using a fast-paced offense that's racking up huge chunks of yardage and scoring at an astounding clip, Maryland isn't content merely to blow out the opposition.

The objective Saturday was to pound No. 21 Syracuse into submission.

"Our goal was to try to make them quit, and I think we did a good job at that," quarterback Josh Jackson said after the Terrapins rolled to a surprisingly lopsided 63-20 victory.

Jackson threw for 296 yards and three touchdowns to anchor another prolific offensive performance by Maryland, which scored 42 first-half points and finished with a whopping 650 yards in offense.

After beating Howard 79-0 in their first game under coach Michael Locksley, the Terrapins (2-0) came up with an impressive encore against a highly regarded foe.

The 63 points were the most ever by Maryland against a ranked opponent. Although Locksley eased up after a 64-yard touchdown run by Javon Leake early in the third quarter, the Terrapins finished with 29 first downs and 354 yards rushing.

Locksley came to Maryland after serving as offensive coordinator at Alabama, and Jackson transferred from Virginia Tech in February. The two have teamed to form a quick-strike offense that is equally effective on the ground and through the air.

Jackson completed 21 of 38 passes, attempting only two throws in the fourth quarter. He has tossed seven TD passes in two games with one interception.

"Our style of play, it's hard to match it — our tempo and the way we executed it," Jackson said. "That's kind of what we expect. None of us thought this was a surprise for us to be able to put up points."

Anthony McFarland Jr. ran for two scores and caught a 6-yard TD pass from Jackson during a sparkling first half in which the Terrapins amassed 397 yards and built a 29-point lead against a Syracuse team coming off a season-opening shutout of Liberty.

"Obviously, we're not as good as the first game, and I would like to think we're not as bad as the second game," said Orange coach Dino Babers, insisting that the defense will ultimately be the strength of the team.

Perhaps, but on this day Syracuse was constantly in pursuit of wide open receivers and trying to chase down runners past the line of scrimmage. And when they caught up to them, it often wasn't good enough.

"There were a lot of missed tackles," Babers lamented. "And when you have missed tackles on a defense, you're going to get guys extend plays."

Missed tackles aside, Maryland's offense presents plenty of problems because Jackson is a skilled passer and a threat to run, and he's got a host of capable running backs behind him.

"We run a style of offense that the defense can't be right unless they out-execute us," Locksley said.

A 7-yard touchdown pass from Jackson to Tyler Mabry, a Syracuse turnover and a 3-yard run by McFarland made it 14-0 with less than 6 minutes elapsed.

It was 14-7 before Leake ran for a score and McFarland followed a turnover by the Orange with a 20-yard TD run for a 28-7 lead.

That was enough offense to beat a Syracuse attack led by redshirt sophomore Tommy DeVito, who went 28 for 39 for 330 yards and three touchdowns. But he lost a fumble and threw an interception, turnovers that Maryland converted into scores.

Maryland went 11 for 15 in turning third downs into first downs, including 8 for 9 in the first half.

"That's an amazing statistic, no matter who you're playing," Babers said. "That is not indicative of our defense. We're normally fantastic on third down."

Syracuse was 6 for 15 on third down and failed to convert any of its three fourth-down tries.

Syracuse appears poised to exit the Top 25 after opening at No. 22 and jumping a notch last week.

"This is definitely humble pie," Babers said. "I don't know what it tastes like, but it probably tastes exactly the way I feel right now."

Syracuse: The defense couldn't stop the run and was helpless against the pass. DeVito got off some decent throws when given time in the pocket but does not fare well under pressure.

Maryland: There's no denying that this offense is electric and Jackson is best suited to run it.

Maryland: First road game is at Temple, which opened with a 56-12 rout of Bucknell before getting a bye this week.