No. 4 Oklahoma rolls past Western Carolina 76-0 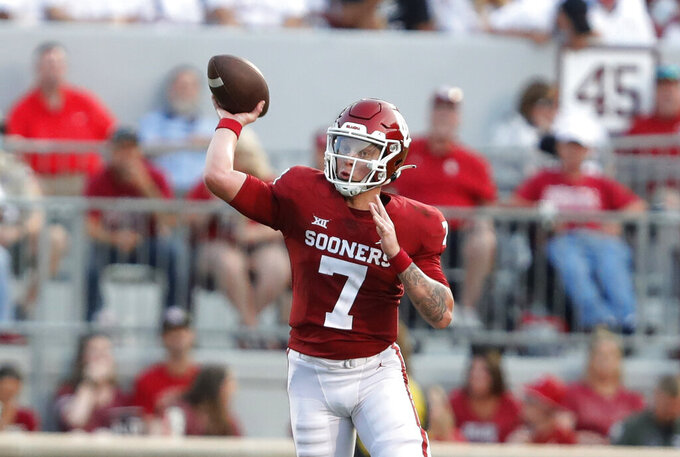 The Sooners stewed for a week, then took out their frustration on Western Carolina. Rattler threw five touchdown passes, and No. 4 Oklahoma rolled past the Catamounts 76-0 on Saturday night.

“When we got in the facility on Monday, even on Sunday, the vibe was uncomfortable,” Rattler said. “We knew what we had to do. We were challenged this past week and came out here today and executed our plays, went through the reads, played hard for four quarters. And that was our big thing — four quarters and finish. We did well with that.”

Oklahoma matched its fifth-highest point total in school history and posted its highest score since 2007. It was the program's third-largest margin of victory, behind 77-0 wins over Missouri in 1986 and Texas A&M in 2003.

The Sooners led 62-0 after three quarters, and the fourth quarter was shortened to 12 minutes.

Rattler completed 20 of 26 passes for 243 yards before resting in the second half of Oklahoma’s 10th straight victory. He joined Jason White as the only Sooners to pass for five touchdowns in a half.

He threw two interceptions against Tulane, but took a step forward on Saturday.

“I think he was just more patient," Oklahoma coach Lincoln Riley said. "Really, just a mindset to just go execute and really never got off of that, and that’s what the best ones do. They can get in that kind of high level of focus and be able to maintain it, and he was much better there today.”

Oklahoma’s Gabe Brkic kicked a 56-yard field goal in the first half, his fourth of 50 or more yards in the first two games. Jadon Haselwood caught two touchdown passes and Jaden Knowles had 102 yards from scrimmage and ran for two touchdowns for the Sooners (2-0).

Rogan Wells completed 16 of 29 passes for 86 yards for Western Carolina (0-2), a Championship Subdivision program that fell to 0-60 all time against Bowl Subdivision teams.

“Well, we wanted to have some success early," Western Carolina coach Kerwin Bell said. "When you go in a game like this, you got to have some success and then you can sort of stay in a little bit and not get the margin so wide. But ... Rogan missed two or three throws on crucial downs. We dropped four or five balls.”

Oklahoma held the Catamounts 178 yards, including 55 rushing. The Sooners earned their first shutout since last September’s victory over Missouri State.

Now, the Sooners can focus on Saturday's matchup with former Big 8 and Big 12 rival Nebraska.

“I know it’s a big rivalry, was back in the day,” Rattler said. “It’s gonna be a big, fun atmosphere, especially being at home. It’s just another game, though. We’ve got to go in and prepare this week and see what they do on the defensive side and practice it to perfection, and then come out Saturday and play our best for four quarters.”

Bell said he was asked at halftime if he wanted his team to play the second half because one of the banks of lights was not operational during the game.

“We don’t surrender in this game. We’re not going to surrender as a football team. We got some really great live reps, which is going to help us win this (Southern) conference.”

Oklahoma's transfer from Tennessee got loose after struggling to find his way against Tulane. He led the Sooners with 74 yards on nine carries and scored his first touchdown for Oklahoma on a 20-yard pass from Rattler.

Oklahoma freshman Danny Stutzman, a second-string linebacker, led the Sooners with eight tackles. He hurt his arm though, and said on Twitter that he's getting a CT scan on Sunday morning.

Western Carolina: The Catamounts were overmatched and were never in the game. Oklahoma led 17-0 at the end of the first quarter and 45-0 at halftime.

Oklahoma: The Sooners got more out of their running game this week, posting 277 yards on 38 attempts.

The Sooners could move up a spot because No. 3 Ohio State lost at home to No. 12 Oregon.